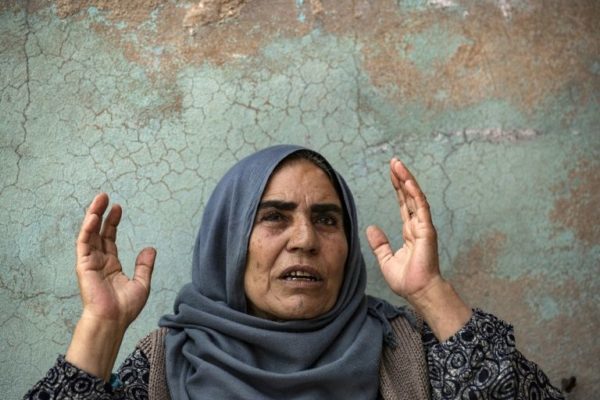 Qamishli (Syria) – Syrian Kurdish mother Shara Sido says the news came to her via a messaging application. She received an image of a bullet-riddled corpse with the instruction: “Come collect your son.”

Sitting inside a modest house in the de-facto Syrian Kurdish capital of Qamishli, the displaced 65-year-old scrolls through her phone to find a picture.

“This is the monster,” she alleged, showing AFP a photograph of the Syrian fighter she said confessed to shooting dead her 38-year-old son.

“They killed my son in cold blood,” she said, blaming Turkey-backed Syrian fighters.

Turkish troops and their Syrian proxies have overrun a swathe of northern Syria since October, after a deadly military campaign against Kurdish forces that caused tens of thousands to flee their homes.

Sido used to live in the border town of Ras al-Ain, before Turkey and its rebel proxies on October 9 launched an offensive against Kurdish forces they view as “terrorists”.

As soon as the invasion started, the mother of five and her family fled to Qamishli, carrying nothing but a few basic items.

Her son, Rezan, returned to Ras al-Ain one week later to collect personal documents and clothes for his three children, but rebels barred him from entering, she said.

They fired bullets at his vehicle, killing him along with a driver and three of his friends, she told AFP, showing pictures of bullet wounds visible on their corpses.

“I will expose their crimes to the world,” Sido said.

Stories such as Sido’s have instilled fear in a Kurdish minority, who have long accused rival Turkey of seeking to engineer demographic change.

“They are coming to kill the Kurds,” Sido alleged after the latest cross-border incursion.

In the two months since the invasion started, Turkey has established a so-called “safe zone” in a 120-kilometre (70-mile) long strip along its southern border, where it says it wants to resettle Syrian refugees.

Turkish state media last month said around 70 Syrians, including women and children, crossed the border to Ras al-Ain in the first of such returns.

Meanwhile, the United Nations says about half of the 200,000 people displaced by the Turkey-led military operation are starting to return to the area.

But the Syrian Observatory for Human Rights, a Britain-based war monitor, says most of those returning are Arabs, not Kurds.

Mustafa al-Zaim, a Kurdish merchant who fled to Qamishli in October, says there is no way he is going back.

“We wouldn’t even think of returning without international guarantees,” the 44-year-old said.

He said Turkey-backed rebels had seized his home, a supermarket and several other stores he owns in Ras al-Ain.

They also sent him a message asking for $15,000 to “protect” his property and stock — an offer he said he refused.

“They had already robbed and looted everything,” he told AFP.

In a recent report, Human Rights Watch said Turkey-backed rebels had barred displaced Kurdish families from returning to Turkey’s “safe-zone”, while also looting and occupying property they left behind.

She said that, “so long as Turkey is in control of these areas, it has a responsibility to investigate and end these violations”.

It called on the rights group to withdraw the “biased” report, saying it “does not reflect reality on the ground”.

Turkey’s October 9 invasion was the latest in a series of such military operations on Syrian soil.

Film director Teymour Afdaki says Turkey is responsible for the gravest abuse of all.

“The occupation itself is the biggest violation,” he said.

His two daughters sitting on his lap, the 42-year-old recounts how rebels burned his home in Ras al-Ain, torching around 500 books he had stored inside.

“These books were an expression of our Kurdish identity,” he told AFP.

But even without a home to go back to, he says he still has hope.

“When we left our homes, we did not close our doors,” he said.

“We will soon return.”