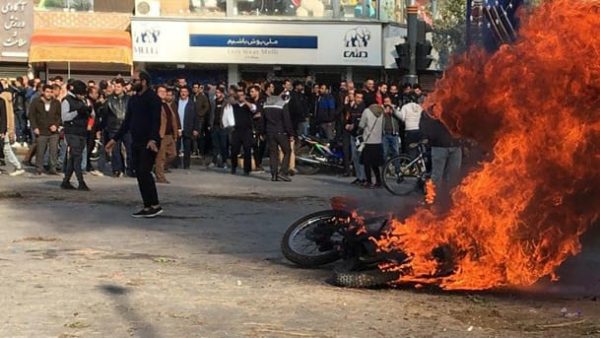 Amnesty intl urged the international community to denounce the intentional lethal use of force by Iranian security forces that has resulted in the killings of at least 143 protesters since demonstrations broke out on 15 November.
Share:

The international community must denounce the intentional lethal use of force by Iranian security forces that has resulted in the killings of at least 143 protesters since demonstrations broke out on 15 November.

According to credible reports received by the organization, at least 143 people were killed. The deaths have resulted almost entirely from the use of firearms. One man was reported to have died after inhaling tear gas, another after being beaten. Amnesty International believes that the death toll is significantly higher and is continuing to investigate.

“The rising death toll is an alarming indication of just how ruthless the treatment of unarmed protesters has been by the Iranian authorities and reveals their appalling assault on human life,” said Philip Luther, Research and Advocacy Director for the Middle East and North Africa at Amnesty International.

So far, while the UN High Commissioner for Human Rights, the EU and a number of states have condemned what they have described as apparent use of excessive force, these responses have failed to explicitly acknowledge the use of lethal force to kill protesters, despite mounting evidence.

Horrific accounts from eyewitnesses and victims’ relatives on the ground, information gathered from human rights activists and journalists outside Iran and extensive video footage analysed by Amnesty International’s Digital Verification Corps provide clear evidence that Iranian security forces have been intentionally using firearms against unarmed protesters who posed no threat to life.

Security forces responsible for the crackdown include Iran’s police force, the Revolutionary Guards and plain-clothes agents from the Basij paramilitary force and others.

Amnesty International has received information indicating that, in many cases, the Iranian authorities have refused to return victims’ bodies to their families and, in some, security forces have removed dead bodies from morgues and transferred them to unknown locations.

In some cases, there are shocking reports that, when the authorities have returned victims’ bodies to their families, they have demanded payment citing several reasons, including the cost of the bullet that killed their loved one or compensation for property destroyed during the protests; these allegations have been denied by at least one official in Khuzestan province. In a pattern consistent with previous protester killings, the authorities have threatened victims’ families with arrest if they hold funerals for their loved ones or to speak to media.

Amnesty International has also received reports of the authorities moving injured protesters from hospitals to detention facilities, putting their lives at risk by denying them potentially life-saving medical care.

Under international law, security forces may only resort to the use of lethal force when strictly unavoidable to protect against imminent threat of death or serious injury.

Even if a small minority of protesters resort to violence, security forces must always exercise restraint and use no more force than is strictly necessary, proportionate and lawful in response to the violence they are facing.

Below is a breakdown, by province, of the 143 deaths reported so far to Amnesty International. The organization obtained the information from reports whose credibility and reliability it has ascertained by interviewing victim’s relatives, journalists and human rights activists involved in gathering them. It has then crosschecked the information.