Aoun to hold consultations for next PM, Hariri not interested 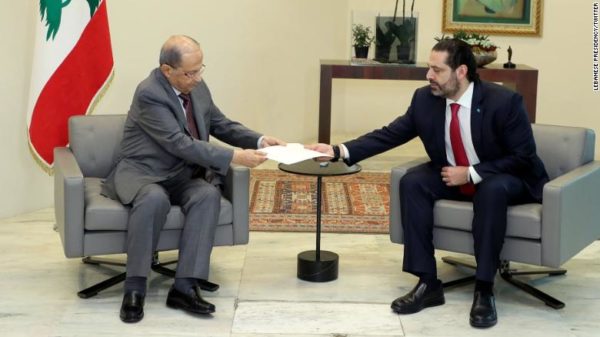 BEIRUT- Lebanon’s president Michel Aoun will hold binding consultations with members of parliament on Thursday to designate the country’s next prime minister, sources at the presidential palace said on Tuesday.

Prime Minister Saad al-Hariri who resigned last month amid sweeping protests that have thrown the country deep into political and economic crisis, announced today that he is not interested in being designated as the next PM .

H said that hee is withdrawing his candidacy for the premiership.

His announcement comes nearly a month after he resigned amid ongoing protests as well as a severe economic and financial crisis.

In a written statement, Hariri called on President Michel Aoun to quickly hold consultations with heads of parliamentary blocks to name a new prime minister.

Hariri submitted his government’s resignation on Oct. 29 in response to nationwide anti-government demonstrations that erupted two weeks earlier. They’ve since targeted corruption and mismanagement by the country’s ruling elite.

Hariri said Tuesday that he hopes withdrawing his candidacy will open the way for a solution to the political deadlock. He also insisted that a new government made up of experts is needed to get Lebanon out of its crisis.

According to analysts Aoun is being pressured by his ally the Iranian backed Hezbollah militant group to form a cabinet of political technocrats , while Hariri is insisting the government should be formed of neutral experts .