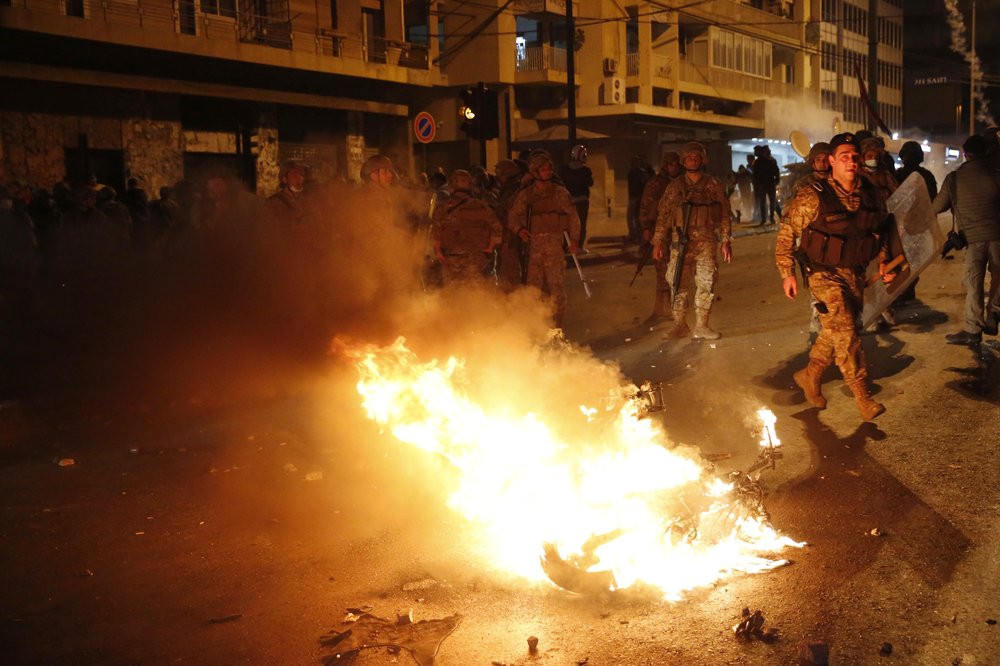 Lebanese army soldiers stand near a motorcycle that was set on fire , during a clash between supporters of the Shiite Hezbollah and Amal groups and the anti-government protesters, in Beirut, Lebanon, early Monday, Nov. 25, 2019. Security forces fired tear gas amid confrontations in central Beirut that went into Monday morning between Hezbollah supporters and demonstrators protesting against Lebanon’s political elite.(AP Photo/Hussein Malla)
Share:

Demonstrators demanding a complete government overhaul were attacked by pro-Hezbollah and Amal gangs on Sunday.

Demonstrators demanding a complete government overhaul have been mobilised since protests began on October 17, but a bitterly divided political class has yet to find a way forward.

Lebanon has faced 40 days of anti-government protests fuelled by anger at corruption among the sectarian politicians who have governed Lebanon for decades.

Frustrated by the stalemate protesters called for roadblocks and a general strike on Monday, but an attack by supporters of allied parties Hezbollah and Amal on Sunday night weakened the turnout.

Political parties “are trying to instil fear in us as a people so we don’t progress and stay at home”, said Dany Ayyash, 21, who was blocking a key road in Beirut’s Hamra district.

But “the attack gave us all – at least the ones here right now – a sense of determination,” Ayyash said.

At around midnight on Sunday, backers of Hezbollah and Amal attacked demonstrators at a flyover near the capital’s main protest camp.

Brandishing party flags, they hurled stones at peaceful demonstrators and taunted them as riot police deployed to contain the violence.

The attackers also ravaged a nearby encampment, tearing down tents and damaging storefronts in their most serious assault on protesters so far.

A business group representing much of Lebanon’s private sector called on Monday for a three-day general strike to press the country’s divided politicians to form a government and end a crisis that has brought the economy to a standstill.

The group issued its statement hours after the flyover clashes broke out between Hezbollah and Amal and anti-government protesters.

“The economic bodies have decided unanimously to call for the implementation of a general strike to close all private institutions in the country on Thursday, Friday and Saturday,” said the Lebanese Economic Bodies, a group that includes private industrialists and bankers.

“The political forces have not assumed their national responsibilities and have not shown the seriousness necessary to produce solutions to the current crisis,” it said in a statement.

Without elaborating it added its “escalation” would continue until a new government is formed.

There have been widespread concerns over Lebanon’s economy – of which one such worry is the shortage of US dollars, which has caused several businesses to close and many people losing their jobs.

“It is causing a crisis,” Al Jazeera’s Zeina Khodr reported from Beirut about the protests’ impact.

“The [Lebanese] economy doesn’t rely on the local currency, the lira, importers pay in dollars and many businesses demand payment in the US currency.”

One resident told Al Jazeera “Soon, I am going to move out of my apartment because the owner is insisting on taking the rent in US dollars.”

He added he was not willing to pay it because it would mean an increase of 30-35 percent in his rent.

Khodr noted banks are limiting access to the US dollar and that has created a black market, causing the local currency to lose 25 percent of its value while leading to a rise in the cost of goods in Lebanon where “almost everything is imported”.