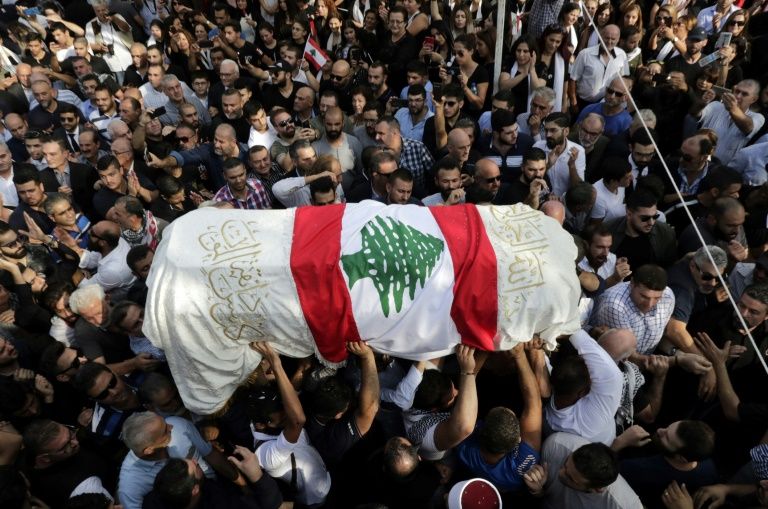 The coffin of slain Lebanese protester Alaa Abou Fakhr, draped in a national flag, is carried by mourners through the streets of his hometown of Chouaifet, southeast of Beirut, during his funeral procession on November 14, 2019
Share:

A Lebanese soldier who shot and killed a protester in Beirut last week was charged Thursday by a military prosecutor with murder, state-run National News Agency said.

The agency said a colonel who was on the scene with the soldier at the time was also charged. The soldier could get a death sentence if convicted of murder.

Alaa Abu Fakhr, 38, was shot dead Nov. 12 by the soldier, who was trying to open a road closed by protesters in southern Beirut, marking the first death since widespread protests against Lebanon’s ruling elite began Oct. 17.

The soldier, who NNA identified only by his first name and the first letter of his last name, Charbel A, has been under detention since the day of the shooting. He and the colonel, identified as Nidal D, were referred to a military investigative judge who will start questioning them on Monday, according to NNA.

Protests exploded on the streets in mid-October in response to new proposed taxes and quickly evolved into an unprecedented nationwide uprising against the country’s entire political leadership. Protesters demand all those politicians go, blaming them for decades of systematic corruption that has left the Mediterranean country on the brink of economic and financial disaster.

Berri’s call came two days after protesters prevented legislators from reaching the parliament building to draft and study new laws. The protesters say parliament has no right to draft laws as there is no government since Prime Minister Saad Hariri resigned Oct. 29, meeting a key demand of protesters.

President Michel Aoun’s office announced that a ceremony to celebrate Independence Day at the presidential palace on Friday has been canceled because of “the current situation.”

A military parade is scheduled to mark the anniversary at a barracks southeast of Beirut. Protesters, who have taken to main squares in major cities since Oct. 17, have also plans for a civil celebration of the national day.

On the eve Lebanon’s 76th Independence Day, Aoun barely mentioned the month-long protests in his speech. He said consensus on government formation remained far off because of “contradictions that control Lebanese politics.” He didn’t elaborate.

But Aoun appealed to protesters for dialogue to learn “their real demands and ways to implement them. Only dialogue is the right path to resolve crises.”