Why Iranians Are Setting Their Own Banks on Fire 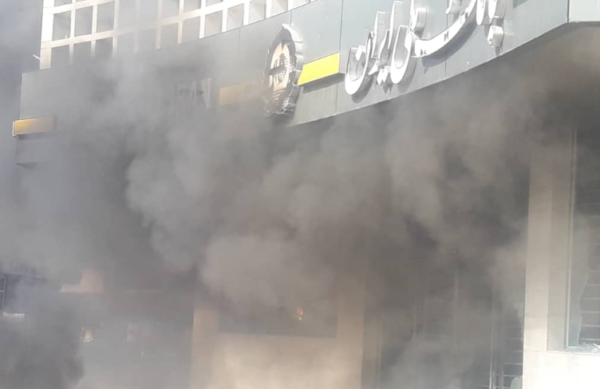 Ray Takeyh is a senior fellow at the Council on Foreign Relations.

Since Friday, massive protests have spread to more than 100 cities across Iran, in response to a sudden rise in gas prices. An estimated 100 banks and 57 shops have burned down. Iranian security forces have arrested more than 1,000 people and killed at least 12, though activists put the number as high as 40, and over the weekend the government shut down internet access to thwart demonstrators from organizing on social media.

The usual explanation for such disaffection is to blame Iran’s financial distress on the economic sanctions imposed by the Trump administration after America’s withdrawal from the Iran nuclear deal. But the reality is more complicated.

For the past several years, there has been a subtle debate inside the Islamic Republic’s corridors of power over competing economic visions. President Hassan Rouhani has stressed the need for access to the global economy, while Supreme Leader Ali Khamenei has pressed his notion of the “economy of resistance”—relying on internal economic resources and eschewing foreign commerce. It now appears the hard-liners have won the debate and are implementing their vision: As part of his “economy of resistance,” Khamenei has pushed to cut government expenditures, which the regime did last week by slashing gasoline subsidies, prompting the price spike and the protests.

The Iranian government might gain control of the streets once again, as has happened in the past. But the latest demonstrations reveal an uncomfortable truth for the regime: that the Islamic Republic is increasingly a government without supporters. While the demonstrations have not become as big or sustained as the 2009 “Green Revolution,” in which predominantly middle-class Iranians protested fraud in the presidential election, this current revolt still represents a significant uprising by Iran’s working class, which had long been viewed as supportive of the ruling regime.

America today faces a hard-line government in Iran that has forfeited much of its legitimacy, which suggests the United States should keep up the sanctions pressure to further weaken the regime’s standing.

In recent years, the most important debate in Iran has been over what’s causing the country’s economic ills. Double-digit inflation and unemployment rates continue to bedevil Iran, with the International Monetary Fund estimating a negative growth rate of 9.5 percent for the coming year.

In 2013, Rouhani, as a presidential candidate, successfully made the argument that the path to recovery was to attract foreign investments. The barrier to such commerce was thought to be sanctions imposed in response to Iran’s nuclear infractions. Rouhani had no stomach for the contentious task of structural economic reforms and hoped an injection of money from abroad would revive the Iranian economy. Once elected, he succeeded in negotiating a nuclear arms control agreement, and some foreign investors returned to Iran. But the overall impact was negligible. Even before President Donald Trump abandoned the Iran deal and reimposed U.S. sanctions, many Iranians had given up on the idea that foreign trade was the key to financial salvation.

In contrast with Rouhani, Khamenei and the hard-liners never believed that foreigners bearing gifts would resolve their problems. The supreme leader has long championed an arrangement that relies, as he put it in a 2014 speech, “on domestic capacities, which are very broad in scope.” This, in essence, means developing internal markets, weaning Iran off oil, expanding trade relations with regional states, battling corruption and, most important, reforming the onerous government subsidies that drain Iran’s budget.

The conversation about economics in Iran has become unusually honest and stark. Rahmani Fazli, Rouhani’s minister of interior, stipulates that only “20 to 30 percent of the cause of our economic problems are economic warfare and sanctions.” One of the more courageous reformist politicians, Mostafa Tajzadeh, went even further, claiming, “Iran may not have a revolution, but it could face economic collapse.” And few in Iran seem to have confidence in Rouhani’s idea that diplomatic conclaves and appealing to Europeans for money can resolve the country’s deep-seated economic dilemmas.

Khamenei’s vision of the resistance economy suffers from its own delusions and impracticalities. Iran is highly dependent on oil revenue, and it is hard to see how it can offer alternative, competitive products that other countries will import in significant amounts. The idea of developing regional markets in a Middle East that is pierced with civil wars, many of them fueled by Iran itself, is hardly realistic. The Iranian judiciary’s campaign against corruption has provoked cynicism for targeting the regime’s detractors, while the Revolutionary Guards, who are drowning in corruption themselves, are hardly censured. The Iranian government’s ham-fisted attempt to deal with fuel subsidies last week, suddenly raising prices by 50 percent, has sparked the widespread protests.

At its core, the hard-liners’ approach to the economy is less about growth than it is about preserving the ideological character of the state. Khamenei and his disciples’ principal mission is to sustain the Islamic Republic’s Islamist values. They fear that integration into the global economy would force Iran to be dependent on the West’s financial system. The revolution can best be nurtured in isolation. And a regime devoted to the export of that revolution throughout the region needs an economy that is invulnerable to Western financial pressures. As Khamenei himself has said, Iran “should do something to make the country immune to sanctions.” The lesson the hard-liners have learned from the years of nuclear truculence is not that they should accommodate the international community’s concerns but that they should craft a system that can resist its pressures.

For now, Khamenei has won the day. But he is facing a serious backlash. The middle classes in Iran have long given up on the theocracy and its contrived political processes. The hard-liners’ last pillar of support was thought to be the working class that they relentlessly venerate from their podiums. But the working poor care little about the government’s divine professions and are more interested in the welfare state that is now shrinking. As with the last days of the shah in the late 1970s, the Islamist ruling elite today seem oblivious to all that is crumbling around them. They will persist with involvement in Arab civil wars that the Persians disdain and revamp a nuclear program whose costs are more apparent than its benefits.

While Iran’s most consequential leaders don’t believe sanctions relief is the answer to their economic difficulties, they are wrong. Iran will always remain dependent on the export of oil, and the vagaries of the global economy will inevitably affect its financial vitality. Khamenei’s crackpot theory will lead only to poverty and dislocation. And with economic distress comes an explosive political problem, as the Iranian masses correctly blame their government’s missteps for all their suffering. The challenge for America is to deepen the theocracy’s self-inflicted wounds. The sanctions regime must be sustained. If Khamenei and his cohort are determined to walk the plank, they should be subtly pushed along that path by the United States.