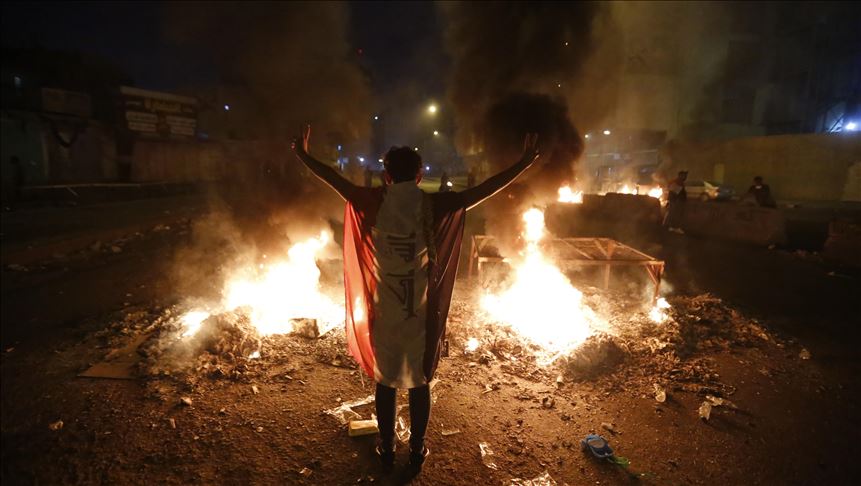 U.S. Secretary of State Mike Pompeo on Monday said the United States was prepared to impose sanctions on any Iraqi officials found to be corrupt as well as those responsible for the deaths and wounding of peaceful protesters.

“We will not stand idle while the corrupt officials make the Iraqi people suffer,” Pompeo told reporters at the State Department. “The United States will use our legal authority to sanction corrupt individuals that are stealing Iraqis’ wealth and those killing and wounding peaceful protesters.”

At least 315 people have been killed since the start of mass unrest in Baghdad and southern Iraq in early October, the largest demonstrations since the fall of Saddam Hussein in 2003.

The protests are an eruption of public anger against a ruling elite seen as enriching itself off the state and serving foreign powers, especially Iran, as many Iraqis languish in poverty without jobs, healthcare or education.

Hundreds on Monday blocked the entrance to the Umm Qasr commodities port near Basra, preventing employees and tankers from entering and bringing operations down by 50%, two port sources said.

If the blockage goes on, operations will come to a complete halt, the sources said. The port was previously blocked from Oct. 29 to Nov. 9 with a brief resumption of operations between Nov. 7-9.

“Our protests in Umm Qasr are in solidarity with our brothers in Tahrir Square and other provinces,” said protester Karim Jawad, referring to the main protest site in Baghdad.

The blockage cost the country more than $6 billion during just the first week of the closure, a government spokesman said at the time.

In Kerbala, most shops and markets were closed in response to a call from the local trade chamber. In Hilla and Diwaniya, the striking workers joined the main protest camps in the city centres.

In the southern city of Nassiriya, all schools and goverment offices were closed but hospitals remained open. One protester died from wounds sustained there on Friday

In Baghdad, labour unions marched to central Tahrir Square to join thousands of protesters who have been camped out there since Oct. 24.

Protesters regained control of a third bridge leading into the capital’s Green Zone on Sunday, part of a weeks-long attempt to disrupt traffic and reach the fortified complex which houses government buildings and foreign missions.

The unrest has shattered the relative calm that followed the defeat of Islamic State in 2017.