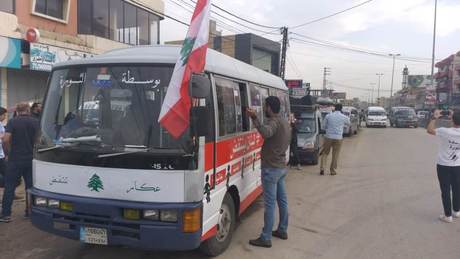 The “Bus of revolution” that kicked off on Saturday from the northern city of al-Abdeh reached Jbeil.

The activists named the bus as the “Bus of Revolution”, symbolising the unity of Lebanese. It is planned to tour Lebanon from north to south.

The coordinators of the campaign said the bus will pass through all the squares and points of protests, starting in Tripoli’s al-Nour Square to Batroun, Jbeil, Jal el-Dib, Ashrafieh, Ring Bridge, Martyrs Square in Beirut, all the way to Khaldeh to place the “crown of revolution” where Alaa Abu Fakhr was killed.

The bus will complete the tour heading south to Naameh, Barja, the city of Sidon, Kafr Rumman and Nabatiyeh. The tour will conclude in Tyre where a dialogue session will be held.

The buss is accompanied by a convoy of vehicles to “paint a bridge of love and eradicate sectarianism.”

The activists said their march will continue to achieve their demands in “building a state of law, justice, freedom, dignity and equality away from quotas.”

“We are in a strong position because our demands are not personal,” they said “our request is to restore our legitimate rights as citizens in this country, lift deprivation and injustice, live freely in dignity and confine the use of weapons to the state’s military and security institutions.”

Nationwide protests demanding the removal of a ruling elite seen as corrupt and incompetent erupted in Lebanon on October 17.