In their mother’s country, Lebanon protesters clamour for citizenship 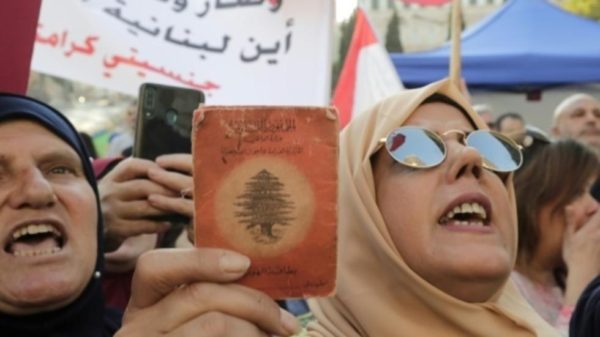 Draped in the Lebanese flag, 22-year-old Dana is bursting with pride at taking part in Lebanon’s “revolution” — even if her home country refuses to give her nationality.

Standing amongst other demonstrators in the capital, she explains she was born in Beirut to a Lebanese mother and has spent all her life in the country.

But like thousands of others in Lebanon, her father is a foreigner and, with Lebanese women unable to pass down their nationality, she has been deprived of citizenship.

“My parents divorced before I was even born. I grew up with my mother,” Dana told AFP.

“I see myself as Lebanese, but they don’t want to recognise my identity,” she added.

The politicians who do not want to change the century-old law, she says, are “patriarchal” and “racist”.

The right to citizenship is one of many long-standing demands to have found new life in the mass protests sweeping Lebanon since October 17.

The unprecedented show of cross-sectarian anger in the street brought down the government last month — but many other of the demonstrators’ demands remain unmet.

Outside the seat of government, 17-year-old Omar said he’d only ever been to Syria once, but was consistently suffering the consequences of his father’s nationality.

Each year, he has to make his way to General Security headquarters to renew his residency permit — like all other non-Lebanese.