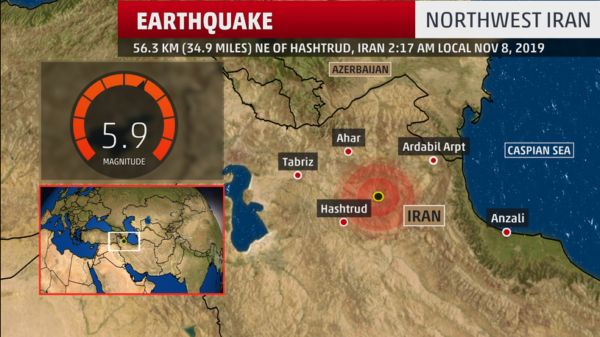 The area is some 400 kilometers (250 miles) northwest of Iran’s capital, Tehran, the Associated Press (AP) reported.

Over 40 aftershocks rattled the rural region nestled in the Alborz Mountains, and residents rushed out of their homes in fear.

The quake injured at least 312 people, state television reported, though only 13 needed to be hospitalized. It described many of the injuries happening when people fled in panic.

There were no immediate video or images broadcast from the area.
Rescuers have been dispatched to the region, officials said.

According to AP, state TV reported the earthquake destroyed 30 homes at its epicenter.

Iran is on major seismic faults and experiences one earthquake a day on average.

The tremor hit the northwestern Iranian province at a shallow depth of about 10km early on Friday morning, local time, according to the US Geological Survey (USGS).

There have been conflicting reports as to how deep the quake actually was, however. The Iranian Seismological Center (IRSC) said that the seismic event occurred at a depth of only 2km.

The USGS predicted that the quake is likely to result in “significant casualties,” and that the disaster is “potentially widespread.”

East Azerbaijan Province, which borders Armenia and the Republic of Azerbaijan, is home to around four million people.

Back in August 2012, over 300 were killed and more than 3,000 injured after twin earthquakes with magnitudes of 6.4 and 6.2 rocked the province, leaving behind a trail of destruction.