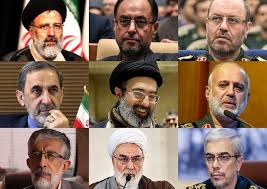 The United States on Monday slapped sanctions on nine aides to Iran’s supreme leader Ayatollah Ali Khamenei on the 40th anniversary of revolutionary zealots seizing the US embassy in Tehran.

The United States said it was also offering a $20 million reward for information to find Robert Levinson, a former FBI agent and CIA contractor who went missing in Iran in 2007 in mysterious circumstances.

The Treasury Department said it was imposing sanctions on nine members of Khamenei’s inner circle, accusing them of “repression” at home and exporting “terrorism” overseas.

“This action further constricts the supreme leader’s ability to execute his agenda of terror and oppression,” Treasury Secretary Steven Mnuchin said in a statement.

The targeted individuals include a number of prominent Iranians, among them judiciary chief Ebrahim Raisi and Ali Akbar Velayati, a senior foreign policy adviser to Khamenei.

Velayati, who served as Iran’s foreign minister from 1981-1997, is wanted in Argentina in connection with the 1994 bombing of a Jewish center blamed on Hezbollah, the Lebanese Shiite militant group with close ties to Tehran.

Also targeted by the sanctions was Iran’s Armed Forces General Staff, which is under Khamenei’s command.

The sanctions mean that any US assets held by the individuals will be blocked and make financial dealings with them a crime for anyone under US jurisdiction.

The move was timed to occur on the anniversary of the 1979 takeover of the US embassy in Iran, which had been a close ally of Washington under the deposed Western-oriented shah.

Zealots held the diplomats for 444 days, leading the United States to break off ties and souring relations to this day.

“Forty years later, the revolutionary regime in Tehran has proven, time and again, that its first acts after gaining power were a clear indication of its evil character,” Secretary of State Mike Pompeo said in a statement.

“The regime continues to unjustly detain Americans and to support terrorist proxy groups like Hezbollah that engage in hostage taking,” he said.

But he said that the United States sought “friendship” and a “truly representative government” with Iran’s people.

The top US diplomat described Levinson as the “longest-held hostage in US history.”

Levinson traveled to Iran’s Kish island in 2007, with his family saying he was a private investigator looking into cigarette smuggling.

He disappeared the day after he arrived and Iranian officials say they know nothing about him.

In 2011, the State Department cited reports that he may be held in the lawless border region with Pakistan.