Tens of thousands march in Lebanon’s Sunday of Unity

Tens of thousands of people gathered in squares across Lebanon on Sunday as they answered a call for a million-person march of unity to mark day 17 of the nationwide uprising against the government.

By early afternoon, thousands had gathered in Beirut, Tripoli and Tyre with more flooding into the central squares as the evening drew in. Even in small villages, such as Kafa Roummane outside Nabatieh in the south witnessed a rally of several hundred despite reports of threats and intimidation.

The area is dominated politically by Hezbollah and their allied Amal Movement but it has strong communist party history, it was once colloquially referred to as Kafa Moscow.
Even as the size of the protests have ebbed and flowed across Lebanon, Tripoli in the north has stayed consistent. On a quiet Saturday with relatively smaller protests elsewhere, images and videos from the northern city’s Al Nour square showed tens of thousands dancing to loud music and chanting slogans against the government.

“We are the popular revolution, you are the civil war,” people chanted in unison on Saturday night.

But Sunday also saw the largest counter-protest so far in support of the president took near Baabda Palace on Saturday afternoon. Thousands of supporters from the Free Patriotic Movement gathering to show their backing of Michel Aoun and his son-in-law, caretaker foreign minister and party head Gebran Bassil.

“We’re here to say to Aoun that we love you and renew our trust in you,” said Hiyam Khairat at the rally.

Wearing a shirt emblazoned with Mr Aoun’s face, George Barbar said he had driven from northern Lebanon to show his support: “If people don’t join hands with the president, there will be no Lebanon,” said Mr Barbar. 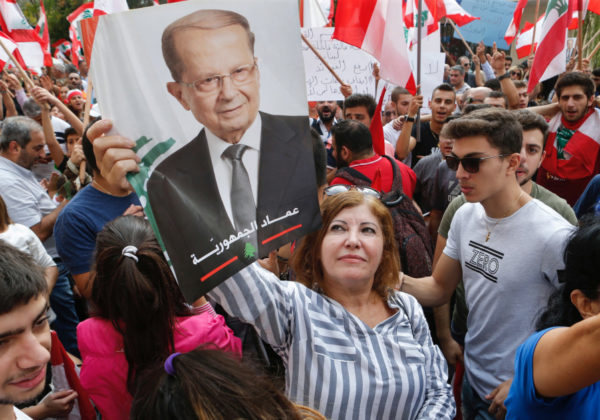 Mr Bassil, who has not been seen in public since the start of the protests, attended and the president made a surprise speech. Appearing on screens at the rally, Mr Aoun appeared on screen, arms raised flashing the victory hand gesture – a common stance for the president in years past.

Mr Aoun said he has a three-step plan to fix the country – end corruption, improve the economy and build a civil, not sectarian state. He gave no detail on how he would reverse decades of decline and intransigence on these issues.

“We have warned our partners that we will get to this stage … and we are here to tell [the people who protested] that we are with them and let’s continue together,” Mr Bassil told the crowd in his address.

The FPM head has been singled out by the protesters across the country and is accused of being one of the main stumbling blocks to passing needed economic reforms.

There is no word yet on the formation of a new government after Prime Minister Saad Hariri collapsed his administration and resigned last Tuesday. But a major hold-up, according to political sources, is whether Mr Bassil will have a position in the administration.

“We were here on the street for over two weeks. We were like, Michel Aoun where are you? He says he is the father of all of us but he’s not showing us that he is,” 17-year old Tina Hujeiry, who lives in Baabda, told The National.

Since protests started on October 17, the president had spoken publicly only twice, in brief pre-recorded televised speeches.

Lebanon’s near-daily protests have brought people from across the country demanding an end to decades of corruption, poor service provision and inefficient governance. While there is no leadership to the movement, and therefore no set list of demands, a common call is for the resignation of political leaders and the formation of a non-political technocratic government to pass needed economic reforms to stave off the looming financial collapse and pass a new non-sectarian electoral to hold an early vote.

While the government of Mr Hariri has resigned, neither Speaker of Parliament Nabih Berri or Mr Aoun appear likely to follow suit. Mr Hariri is also favourite to be asked to head the new administration that may be – to some extent – a technical administration.

Mr Aoun’s office said on Saturday that that he would set the date for formal consultations with political parties on the next prime minister-designate “soon”, but first had to resolve several complications.

“The challenges in front of the future government require a rapid but not hasty approach to the designation process because rushing in such cases can have harmful consequences,” the presidency media office said in a statement.

Protesters in Beirut said that they hoped that the Lebanese would remain united in their rejection of their leaders.

“Tripoli, Beirut, one hand!” chanted Rami Geiadeh, 17, one of a group of young men from Tripoli who joined the Beirut rally. He said he hoped that “the Sunni, Christians and Shia will rise up together and the government will fall”.

Some participants said they were unsure of what will come next.

“We are like a bus that has filled up with people that suddenly realise that there is no driver,” said Walid Qassem, a retired marketing manager. “We need more organisation.”

Speaking about supporters of President Aoun, Mr Qassem observed: “They are much more organised than us. We are alone, and they are backed by Hezbollah”, the influential Shiite Iran-backed party which is allied with the FPM.

Mr Qassem was torn between the desire to see all politicians resign and the fear of chaos. “We need to a government of technocrats followed by elections to renew Parliament and then politicians can really work towards the most important goal, which is fighting corruption.”

As he spoke, a group of excited young men walked by, chanting a popular insult against Mr Bassil. “You see, I am against these kinds of insults,” said Mr Qassem. “We need to unite to start building something new.”