Barriers back 30 years after Berlin Wall. 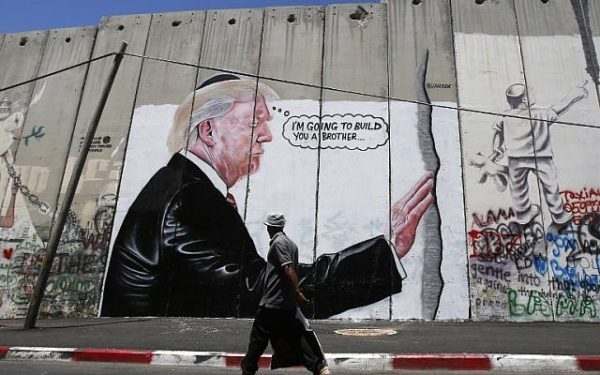 When the Berlin Wall came tumbling down 30 years ago, many hoped its demise portended an end to barriers between borders and isolationism.

But with US President Donald Trump’s planned wall on the border with Mexico, the West Bank “separation barrier” and Hungary’s anti-migrant fence facing Serbia and Croatia, manmade partitions are going up again.

“Edifices of fear, both real and imaginary, are being constructed everywhere,” the Transnational Institute, an Amsterdam-based think-tank, wrote in its “Building Walls” report last year.

The fall of the Berlin Wall, a Cold War structure erected in 1961 to separate Soviet-allied East Berlin from the democratic West, was met with jubilation by Germans and millions of others dreaming of cooperation and openness in a more globalist and liberal world.

But the optimism and idealism of 1989 was “short-lived,” said Alexandra Novosseloff, a senior researcher at the International Peace Institute in New York.

“Walls are still there and have multiplied. There are more today than 30 years ago,” she told AFP.

Not only physical walls but also political and legislative ones are rising.

The United States and some European countries have been taking an ever-harder stance against migrants, and Brexit is the result of citizens choosing to leave a barrier-free European Union created exactly to put an end to the continent’s recurrent, bloody conflicts — often over border disputes.

Bruno Tertrais, deputy director of the Foundation for Strategic Research in Paris, argues that globalisation has, somewhat ironically, fuelled a resurgence of nationalism.

After the initial rush of freedom, many people started worrying that too much openness was putting their national identity and values at risk.

It was really after the terror attacks on the United States, Tertrais said, that “barriers started to multiply.”

Raphael Bossong of the German Institute for International and Security Affairs in Berlin said the post-9/11 war on terrorism “fuelled a sense of paranoia and erosion of political freedoms”.

“By the late 2000s, economic shocks, rising inequality and a growing political backlash against globalisation led to a resurgence of nationalism in the West,” he wrote in a blog entitled “New Walls I: Militarizing Borders in Europe” for the Bertelsmann Stiftung research foundation.

“The resurrection of physical borders has taken on an outsized symbolic importance.”

Elisabeth Vallet, a political analyst at Canada’s Universite du Quebec a Montreal (UQAM), said she had counted “70 to 75” border walls built or being built around the world, compared to 15 in 1989.

Placed end to end, the world’s existing walls would stretch over 40,000 kilometres (25,000 miles), Vallet said — enough to cover the circumference of the Earth and divide our planet into two parts.

Former French diplomat Michel Foucher, author of “The Return of Borders,” argues that the vulnerability many people feel in the face of globalisation has caused them to welcome more state protectionism, and by extension, more walls.

The wall serves as “a metaphor, it is supposed to calm our fears,” Foucher said.

For Vallet, author of “Borders, Fences and Walls — State of Insecurity, “at a time when populism is growing fast, a wall is a quick solution that a populist government can quickly exploit.”

As the migration flows from south to north continue, more and more walls are seeking to keep foreigners out.

“Member states of the European Union and Schengen Area have constructed almost 1,000 km of walls, the equivalent of more than six times the total length of the Berlin Wall, since the nineties to prevent displaced people migrating into Europe”, according to the Transnational Institute.

In spite of their growing popularity, however, there is little evidence of their efficiency, Vallet said.

“They do not, for example, halt the trafficking of drugs, most of which enter the United States through border crossings,” he told AFP by email.

“What is clear is that the ever-changing role of borders serves as an indicator for the health of liberal democracy,” Bossong said.