Why is Iran so afraid of Iraqi and Lebanese anti-government protests? 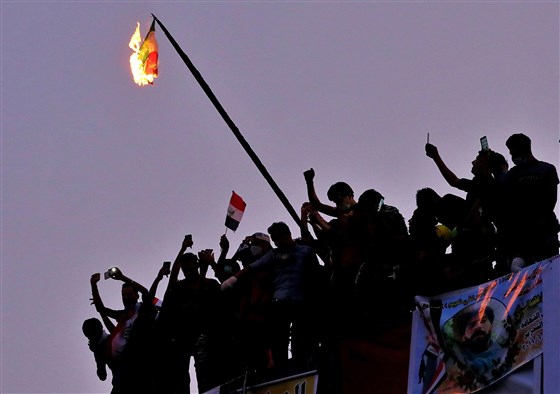 They came dressed in black and wielding sticks.

Images emerged on social media of men widely believed to be supporters of powerful Lebanese militant group Hezbollah tearing through a camp of anti-government protesters in Beirut on Oct. 29, smashing chairs and setting fire to tents.

The tensions between Hezbollah and the largely leaderless anti-corruption protests sweeping Lebanon are a sign of the great unease that Iran and its proxies across the region are feeling at the upsurge of anti-government demonstrations.

After all, Tehran has worked for years to deepen its influence in these countries — and it’s precisely this domestic order that the demonstrators are looking to shake up, according to Neil Quilliam, an associate fellow at Chatham House, an international affairs think tank in London.

“The protests pose a threat to Iranian interests in Lebanon and Iraq because they are national in character and therefore challenge the current political order, which is shored up by groups supported and underpinned by Iran,” he said.

Iran has a lot to lose if its allies such as the politically powerful Hezbollah in Lebanon, as well as Iraqi Prime Minister Adil Abdul-Mahdi’s government and Iraq’s Shiite militias are shunted from power or see their influence diminish.

In Iraq, after U.S. forces overthrew Saddam Hussein in 2003, Shiite allies replaced the Baathist regime. And these are the people in power today and are currently the object of the protesters’ ire. Iran also supports Shiite armed groups in the oil-rich country, who are accused by protesters of building economic empires while many Iraqis struggle in poverty.

In Lebanon, the government is dominated by factions allied with Hezbollah which controls swathes of southern Lebanon where it has channeled the thoughts and desires of many poor Shiites, while fighting neighboring Israel.

And neither Hezbollah nor its ally Amal have escaped the protesters’ wrath.

Even in the groups’ heartland in the south, people have begun to call them out , setting their sights on Parliament Speaker Nabih Berri, the group’s leader.

For its part, Iran is blaming the West for fomenting unrest.

Supreme Leader Ayatollah Ali Khamenei has accused foreign government of meddling in Iraq and Lebanon, and on Wednesday accused “U.S. and western intelligence services, with the financial backing of evil countries” of “fanning the flames of chaos.”

Khamenei’s Iran is up against Sunni Muslim power Saudi Arabia — a U.S. ally. Under President Donald Trump, America withdrew from a landmark nuclear agreement with Iran and reimposed punishing sanctions on Tehran.

All this makes the protests especially tricky for Tehran to handle.

“Iran is trying to keep its distance from the spiraling tensions and turmoil in both countries but its ability to do so is limited because its local allies, the armed groups, are targeted by the protesters,” said Fawaz Gerges, a professor of Middle Eastern politics at the London School of Economics.

Iran’s perceived meddling has fed the anti-government and anti-corruption anger among protesters. In Iraq, in particular, “they don’t like the fact that Iran can potentially interfere in their international affairs,” said Clément Therme a research fellow at Sciences Po, a political science institute in Paris.

In Iraq, deadly protests have often been accompanied by anti-Iran chants, such as “Iran out, out! Iraq will remain free.”

Some protesters have accused Iran or its proxies of being behind a violent crackdown on peaceful demonstrators in the Shiite holy city of Karbala this week, where at least 18 protesters were reported killed and more than 100 injured, according to Amnesty International. The government maintains that one person was killed, and denies involvement in the violence.

Suspicion of meddling by Iran, as well as the U.S., was prevalent among protesters, including Mohammaed Radhi, who owns an electronics shop in Baghdad.

“They’re working to make Iraq part of Iran,” he said. “They partially succeeded in achieving this through forming all those militias who are in fact controlling the country.”