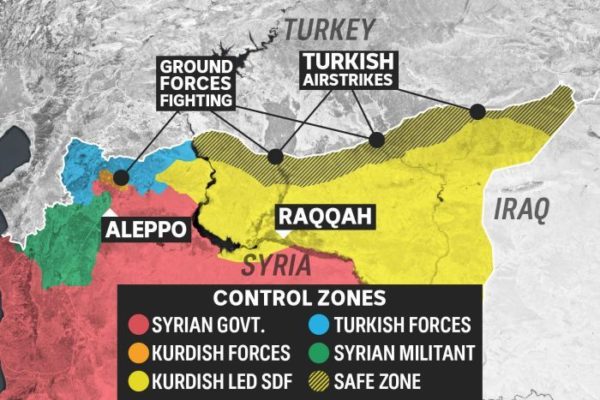 ANTAKYA, Turkey — Heavy fighting has persisted in northeast Syria despite Turkey and Russia agreeing to jointly patrol areas along the Syrian border, according to Kurdish officials.

“Villages of [Darbasiyah and Tal Tamr] are still being heavily attacked, even the ones in which we handed over positions to” the Syrian army, Mustafa Bali, spokesman for the Kurdish Syrian Democratic Forces (SDF) said on Twitter late Wednesday, blaming Russia and the United States for the bloodshed.

Northeast “Syrian airspace is owned by the U.S. It has been open to Turkish aircraft since Oct. 9 for Turkish army and its jihadists to attack the region,” he added.

The comments represent a recent reversal for the SDF, which with the Kurdish People’s Protection Units — widely known as the YPG — fought alongside U.S. forces against the Islamic State militant group in northeast Syria and Iraq.

President Donald Trump’s abrupt withdrawal of U.S. forces earlier this month that opened the way for Turkish-backed forces to cross into Syria has been widely condemned, being seen as an abandonment of Kurdish allies and risking the resurgence of ISIS.

The SDF, the Kurdish Red Crescent, and the pro-Kurdish Rojava Information Center say thousands of civilians have been displaced in the fighting since Ankara and Moscow reached an agreement last week to keep Kurdish fighters out of a strip of a 19-mile deep zone along the Turkish-Syrian border — including a 75-mile-wide strip of land where Turkish President Recep Tayyip Erdogan wants to resettle Syria refugees.

Patrols of the zone to the east and the west of the portion under Turkish control — carved out in a cease-fire deal struck with the United States — were to begin Tuesday, but Reuters reported that Erdogan later said the start would be held off until Friday.

The Turkish government and the military have not responded to the claims and did not answer NBC News’ request for comment.

While Russia had assured Turkey the YPG had left the area with the agreement, Erdogan told lawmakers Wednesday there was still evidence that the militia had not completed its pullout. Turkey considers the YPG an extension of the Kurdistan Workers’ Party or the PKK, deemed a terrorist organization by both Turkey and the U.S., and Erdogan said his forces reserved the right to launch another cross-border offensive against the militia.

On Thursday, the Rojava Information Center, a network of activists collecting information from aid workers and witnesses in the region, said Turkish military and affiliated armed groups were continuing their campaign by bombing at least one village and attacking others with heavy weapons.

While there is a risk of escalation, Russia’s influence over both Turkey and Syrian governments will help ensure the region remains relatively stable, Ahmet Kasim Han, professor of international relations at the Altinbas University in Istanbul, told NBC News.

“Skirmishes are likely, but it is not likely they will turn into large-scale conflicts,” he said. “What Turkey is trying to establish through the (6-mile) patrols with the Russians is an area which Turkey would use to secure its border and ensure there will be no infiltration by the YPG/PKK into Turkey.”

However, Rodger Shanahan, research fellow at the Lowy Institute for International Policy in Sydney, warned Turkey will find it difficult to gain full control over the area with the Syrian government still vying to regain control of its borders and other militias taking advantage of the instability.

“The fighting that we’re seeing at the moment is probably people opportunistically taking land in the hopes of bolstering their negotiating power,” Shanahan said.