‘Baby Shark,’ drinks and dancing: Lebanon’s protests are unlike any other

By DANIEL ESTRIN and LAMA AL-ARIAN

Lebanon’s mass street protests resemble other outpourings of anger in places like Chile and Ecuador. But the Lebanese never miss an excuse to party.

Faced with years of war, Lebanese have coped with strife by using satire, humor and lots of dancing. This thawra or revolution, as anti-government protesters in Lebanon call it, is no different. It’s accompanied by clever handwritten signs, profanity-laced chants and even “Baby Shark” singalongs.

For almost a week now, protesters have been demanding better public services, economic reforms and a new government. And many of them have done so while holding a Lebanese flag in one hand and a beer in the other.

Here are the most popular memes and moments of the protests, including a few of our personal favorites: 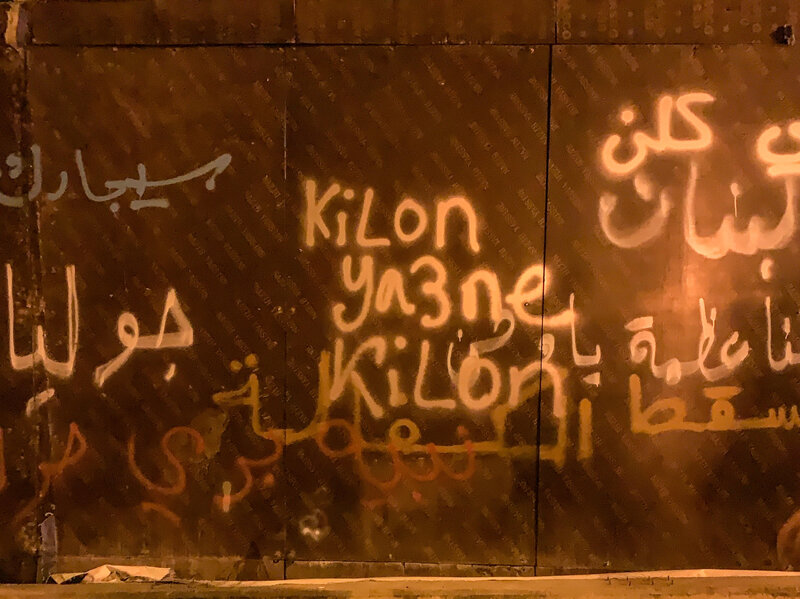 Graffiti showing the words “Kilon Ya3ne Kilon,” one of the loudest chants being heard in recent days in Lebanon. It means “All of them means all of them!”Daniel Estrin/NPR

One of the loudest chants of the protests has been, “All of them means all of them!” Protesters aren’t singling out any one leader. They’re sick of the same political elite Lebanon has had for years, from the 81-year-old speaker of Parliament — in office for almost three decades — to Prime Minister Saad Hariri, whose billionaire father previously held the post.

Leaders scrambled to offer economic reforms, but protesters say they’re too late, even changing some politicians’ names on Wikipedia to the “All of them” slogan.

A variation of this chant is “All of them means all of them, and Nasrallah is one of them.” Hassan Nasrallah, leader of the Lebanese militant group Hezbollah, is a long-revered figure for fighting Israel, but he has stirred resentment among some, as his group has gained political power in the same government the protesters want to topple.

Protesters are also frustrated with the way Lebanon’s politics are tied up in sectarianism. In a power-sharing system set up in the 1940s, the position of the president must go to a Christian Maronite, while the prime minister post can go only to someone who is Sunni Muslim. The system only exacerbates deep divisions in Lebanon, protesters say, with politicians often pitting religious communities against each other.

Warning: Some viewers may find this video offensive.

This chant is crude. And catchy. Literally, it’s a popular Arabic curse referencing one’s mother’s private parts. Idiomatically, it’s an “F-you” to the foreign minister, Gebran Bassil. Old women, young children and feisty teenagers have been singing it, pumping their fists in the air to the tune, which is a mashup of what Arabs chant at soccer games.

Protesters single out Bassil for many reasons. They say he rose to power thanks to his father-in-law, the president. He is also seen as the main figure responsible for one of Lebanon’s biggest woes, its crippled electricity sector. Most cities experience daily power cuts, and many Lebanese pay regular bills for generators in addition to their monthly electric bills.

“He’s been making so many promises about delivering electricity 24/7 … and he blames others for his failures,” said Mohanad Hage Ali, a political analyst at Carnegie Middle East Center.

Instead of improving the power grid, Bassil was behind the commissioning of Turkish power stations on ships parked offshore to supply Lebanon with electricity, costing hundreds of millions of dollars each year.

It’s “the major black hole in the government’s budget in the past decade,” Hage Ali said.

Bassil has also riled some protesters for blaming the country’s problems on the Syrian and Palestinian refugees in Lebanon.

Cursing aside, there have been some kid-friendly moments. Driving through a crowd of protesters on a recent night, a woman named Eliane Jabbour asked them to quiet down while her toddler slept in the front seat, as Reuters reports.

Instead of shouting their usual slogans, protesters switched to a rendition of the YouTube earworm “Baby Shark.”

Jabbour’s cellphone video of the incident has swept the Internet — and now “Baby Shark” has become another anthem sung at the large demonstrations. 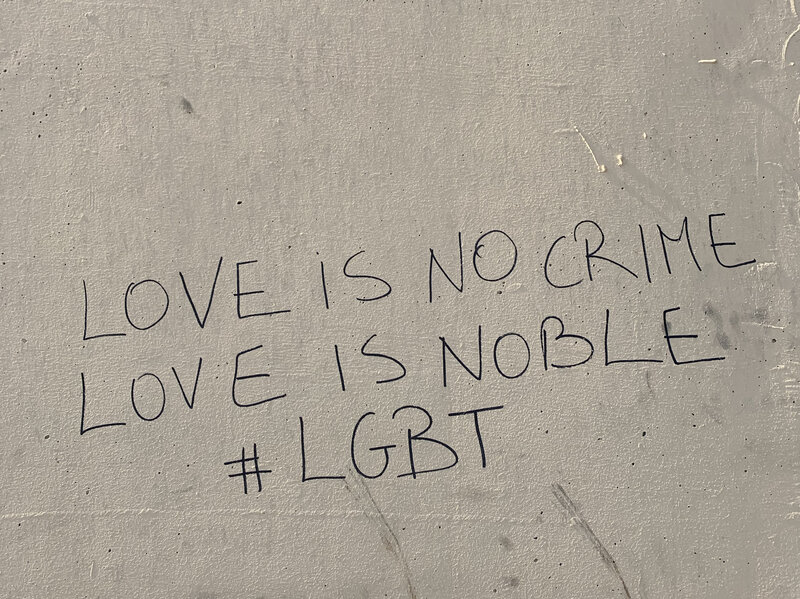 Graffiti on a wall in Beirut reads, “Love is no crime, love is noble #LGBT.” The city has been known as a gay-friendly haven — but this year’s pride parade was canceled over security concerns. Daniel Estrin/NPR

Young protesters are also calling for LGBT rights in Lebanon, with rainbow flags spotted in the crowds and graffiti on buildings from “Proud and Gay” to “Love is no crime, love is noble #LGBT.”

Beirut is considered an LGBT capital of the Arab world, with gay-friendly bars and drag shows. But Lebanese law still considers gay sex a crime with a prison sentence of up to a year, and authorities have prosecuted Lebanese LGBT people in the past. This year, organizers canceled the opening event of Beirut’s LGBT pride festival amid reported threats from religious groups.

Then there’s the derogatory anti-gay term loute, as the Arabic word is pronounced in Lebanese dialect. Other protesters have chanted against politicians, calling them “Louti,” meaning “sodomite.” It references the Quranic and biblical character Lot from sinful Sodom.

One of our favorite signs from the protests is a play on “Baby Got Back,” the 1992 rap song by Sir Mix-a-Lot that was an ode to the large derriere.

The sign reads: “You ain’t got none unless you got funds hun,” replacing the original “buns” with “funds.” 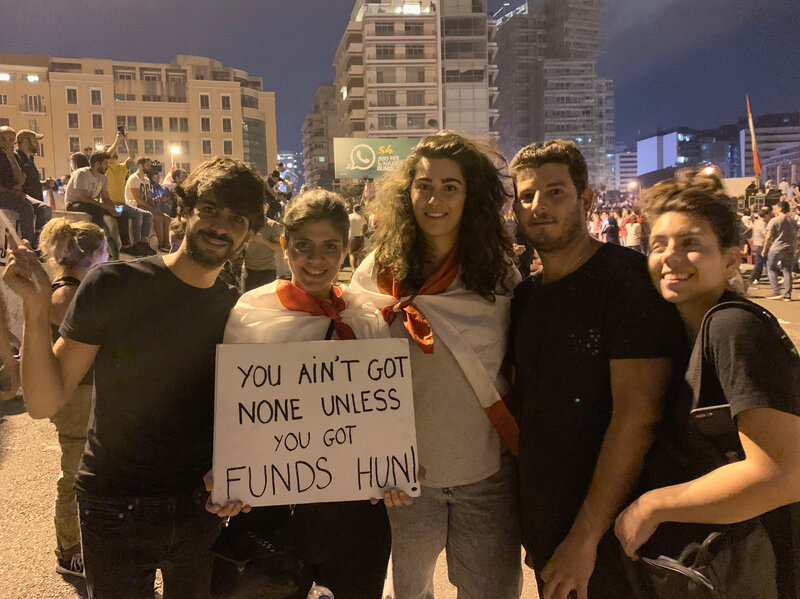 “You ain’t got none unless you got funds hun,” reads a young protester’s sign in Beirut. Graphic designer Stephanie Shlelah, who made the sign, says Lebanon’s money is “disappearing into bank accounts somewhere in the world that we don’t know about.”

The sign, created by graphic designer Stephanie Shlelah, is about the failing state of the Lebanese economy. The country is strapped for cash and has one of the world’s highest debt burdens. Banks have reached out to Lebanese moguls abroad to ask for U.S. dollars, hoping to lure them with high interest rates the country cannot afford in the long run. Protesters also say politicians have pocketed kickbacks for years.

“We have fundings but they are disappearing into bank accounts somewhere in the world that we don’t know about,” Shlelah said. “So the funds need to stay in the country, go into health care, into education, into retirement plans for the people and not into bank accounts into specific people in power.”

Other signs we spotted in the streets reference American TV shows, from a cartoon of Homer Simpson taunting Lebanese politicians to a one-word sign with the name of a Game of Thrones villain. And a message to the prime minister draws on RuPaul’s Drag Race to give a direct order: “Sashay Away.” 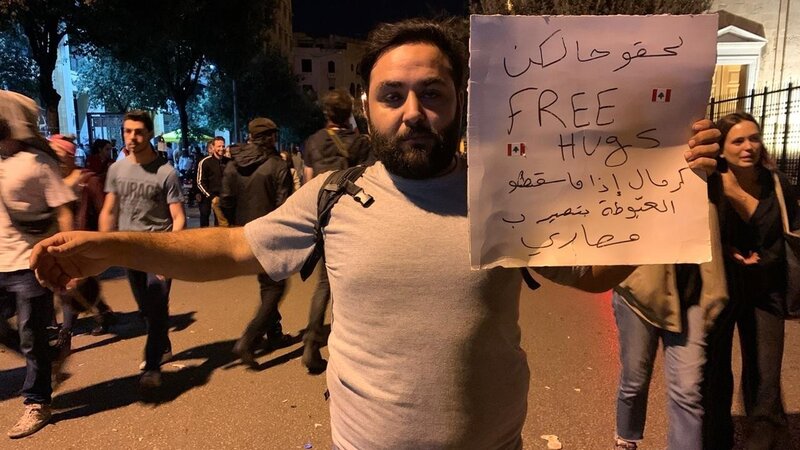 Mahmoud Aswany holds a sign in Beirut that reads, “Hurry up free hugs” — a dig at the government’s attempts to raise revenue from taxes. Lama Al-Arian /NPR

And we’d like to end with a man we’re deeming the winner for the week. We spotted him in the street, holding a sign that reads, “Hurry up free hugs.”

Mahmoud Aswany jokes that the government will even place a tax on hugs if the Lebanese people don’t keep protesting. The protests first started when the government tried to tax calls on the free service WhatsApp.

So, how many hugs has Aswany given away on Beirut’s main protest street? “Countless,” he said.