Analysis: Iran is losing the Middle East, protests in Lebanon and Iraq show 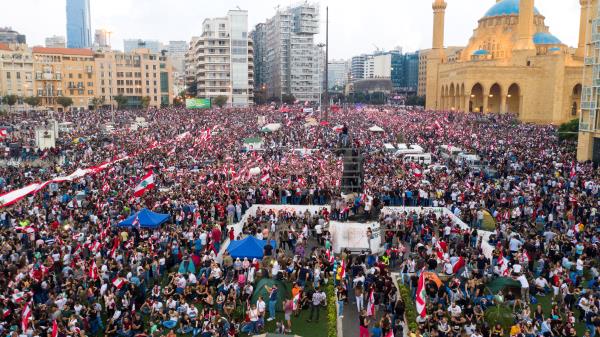 In less than a month, demonstrations against corruption and a lack of economic reform erupted in both Iraq and Lebanon. In both countries, the unprecedented protests, which rocked Shiite towns and cities, have revealed that Iran’s system for exerting influence in the region failed. For the Shiite communities in Iraq and Lebanon, Tehran and its proxies have failed to translate military and political victories into a socioeconomic vision; simply put, Iran’s resistance narrative did not put food on the table.

Since the very beginning of the Islamic Revolution, the Iranian government and the Islamic Revolutionary Guard Corps have had a clear, long-term, and detailed policy on how to export its revolution to the region, mainly in countries with a substantial Shiite majority. Iran had been very patient and resilient in implementing its policy, accepting small defeats with eyes on the main goal: hegemony over Iraq, Lebanon, Syria, and Yemen.

Today, Iran seems to be winning the long game. Its proxy in Lebanon prevailed in last year’s parliamentary elections. In Syria, Iran managed to save its ally, President Bashar al-Assad. In the past several years, Iran has also gained a lot more power in Baghdad through its proxies, including the Popular Mobilization Forces (PMF), the Shiite militias created to fight the Islamic State.

However, in its four-decade plan, Iran overlooked an important point: a socioeconomic vision to maintain its support base. While exhausting every opportunity to weave itself into the region’s state institutions, the Iranian regime failed to notice that power requires a vision for the day after. As events unfold in the region, Iran is failing to rule. Iraq and Lebanon are good examples.

Iran created proxies in both countries, gave them power through funding and arms, and helped them infiltrate state institutions. Today, state institutions in Iraq and Lebanon have one main job: Instead of protecting and serving the people, they have to protect and serve Iranian interests.

Observers have called the current protests in Lebanon “unprecedented” for a number of reasons. For the first time in a long time, Lebanese have realized that the enemy is within—it is their own government and political leaders—not an outside occupier or regional influencer. In addition, political leaders have been unable to control the course of the protests, which are taking place across all sects and across all regions, from Tripoli in the north to Tyre and Nabatieh in the south and through Beirut and Saida. The scale shows that the protesters are capable of uniting beyond their sectarian and political affiliations. What brought them together is an ongoing economic crisis that has hurt people from all sects and regions. As one protester said: Hunger has no religion.

For the first time since Hezbollah was formed in the 1980s, Lebanese Shiites are turning against it.

But most significantly, the protests are unprecedented since Hezbollah also took an unusual stance. Having prided itself for decades for protecting the impoverished and fighting injustice, Hezbollah leader Hassan Nasrallah decided to side with the authorities against the people in the streets. That’s a major setback for Hezbollah as it deals with the current protests, its most difficult domestic challenge so far.

Hezbollah’s leader did not choose to support Prime Minister Saad Hariri’s government carelessly. Scenes of Shiite protesters joining other Lebanese in the streets terrified the party’s leadership. Lebanon’s Shiites have always been the backbone of Hezbollah’s domestic and regional power. They vote for Hezbollah and its Shiite ally Amal during elections, and they fight with them in Lebanon, Syria, and Yemen. In return, many of them receive salaries and services offered abundantly by Iran and Hezbollah.

But for the first time since Hezbollah was formed in the 1908s, Lebanese Shiites are turning against it. In Nabatieh, the group’s heartland in the south of Lebanon, Shiite protesters even burned the offices of Hezbollah’s leaders.

Here, three main factors are at play. First, Hezbollah’s costly involvement in the Syrian war and pressure from U.S. sanctions on Iran have forced the party to cut salaries and services, widening the gap between the rich and the poor within its own community. Meanwhile, the party also drafted mostly Shiites from poor neighborhoods to go fight in Syria, while its officials benefited from the war riches, causing much resentment.

Second, Hezbollah’s constituency was forced to accept Hezbollah ally Nabih Berri as speaker of the parliament as a necessary evil to keep the Shiite coalition intact. Although Berri’s known corruption was at odds with Hezbollah’s narrative of transparency and integrity, the community turned the blind eye for decades. But when Lebanon’s economy started to deteriorate around the same time that Hezbollah’s finances were hit, many Shiites could no longer pay their bills. Berri’s corruption and outrageous wealth could no longer be tolerated.

Third, Hezbollah focused too heavily on military might. It promoted that narrative after Israel’s withdrawal from Lebanon in 2000 and then again after Lebanon’s July war with Israel in 2006. It also claimed success in Syria against its new enemy—Sunni extremism. However, all these victories failed to translate into public well-being. Iran might have benefited, but Shiites in Lebanon got more isolated than ever. That is why it is so meaningful that the Shiite community, by joining the protests, is now attempting to claim its Lebanese identity rather than the religious one that has, so far, failed it.

The story is similar in Iraq. This month, tens of thousands of Iraqis in Baghdad and other Shiite-majority parts of southern Iraq came out in protest over the failures of the Iraqi political class to provide basic services and reduce unemployment and corruption. The crackdown was swift and aggressive, resulting in the deaths of more than 100 protesters. Reuters published a story more than a week into the protests confirming that Iran-backed militias had deployed snipers on Baghdad rooftops to deliberately kill protesters.

Iran’s role in responding to the demonstrations in Iraq and the failure of the government to protect its citizens is a significant indication of Tehran’s influence in the country.

Many former Iran-backed militia commanders are now members of parliament and the government, advancing Tehran’s agenda and creating an alternative economy for Iran under U.S. sanctions.

Like in Lebanon, Iran’s narrative against the Islamic State helped it get its militia leaders inside the Iraqi parliament and slowly infiltrate state institutions. Like Lebanon’s Hezbollah model, if left unchecked, Iran’s Iraqi proxies will slowly but surely become stronger than the Iraqi Army, and the decision of war and peace will be an Iranian one.

It is no coincidence that only Shiites took to the streets in Iraq. Sunnis have long been oppressed by sectarian and Shiite leaders, and Shiites have not yet broadened their identity to a national one instead of a sectarian one. But there’s a sense that if protests continue, they’ll become more nationwide. Some Sunnis and Kurds in Iraq have expressed support for the Shiite protesters but have hesitated to get involved in order to avoid having the protesters labeled as members of the Islamic State, an excuse that Iran has used in both Iraq and Syria to attack uprisings.

Whatever the protests bring, in both Iraq and Lebanon, Iran will not allow its power structures to crumble without a fight.

In both cases, Iran will do what it does best. In Lebanon, instead of stepping back and allowing reforms to be implemented by new governments with qualified ministers, Hezbollah and the Iran-backed militias will likely resort to force. As Nasrallah made very clear, his government will not fall.

Hezbollah will try not repeat the Iraqi PMF’s mistake of responding with violence. That’s why its military units have been training a number of non-Hezbollah members to join what it calls the Lebanese Resistance Brigades. The role of these brigades is precisely to deal with domestic challenges and allow Hezbollah to deny responsibility. Already, in an attempt to create a counter-revolution, hundreds of young men carrying the flags of Amal and Hezbollah attacked the protesters in a number of cities. So far, the Lebanese Army has stopped them from getting too close to the protests, but they have managed to physically hurt and terrorize people outside Beirut, mainly in Shiite towns and cities.

In Iraq, it is likely that Iran-backed militias will resort to violence again to suppress a new round of protests scheduled for Oct. 25. Without international pressure to dissolve the parliament and force Prime Minister Adil Abdul-Mahdi to resign, many people could die. But in any case, Iran’s image will have suffered gravely.

Across the region, the same story is unfolding. Wherever Iran wins, mayhem prevails. From Iraq to Lebanon, it has become clear that Iranian power can no longer be tolerated. And when the country’s own support base can no longer accept Iran as its ruler, the international community needs to take note.

The recent protests show that Iran’s power is more fragile than the world perceives. And more importantly, they should remind that Shiism does not belong to Iran and that maybe it is time to start working directly with Shiite communities.

Hanin Ghaddar is the Friedmann visiting fellow at the Washington Institute for Near East Policy’s Geduld Program on Arab Politics.