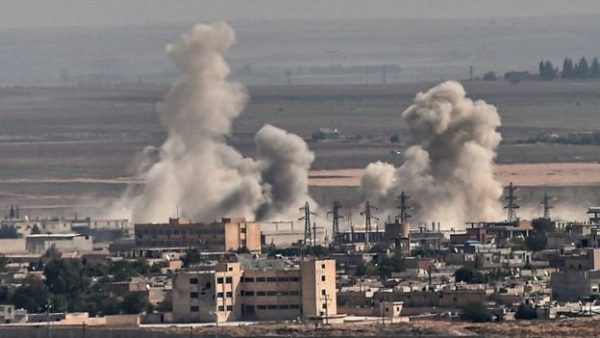 The key border town of Ras al-Ain has been hit by heavy Turkish bombardment
Share:

Fierce fighting is taking place around the Syrian border town of Ras al-Ain as Turkish forces continue their offensive in the north-east against the Kurds.

Turkey says it has taken the key town, but the Kurdish-led Syrian Democratic Forces (SDF) dispute this.

The SDF on Saturday called on their Western allies to close off air space to Turkish warplanes.

Nearly 50 civilians have reportedly been killed on both sides of the border and more than 100,000 displaced.

President Donald Trump’s decision to withdraw US troops from the area effectively triggered the Turkish incursion against the SDF – the main Western allies in the fight against the Islamic State (IS) group.

Turkey accuses the Kurds of being terrorists and says it wants to drive them away from a “safe zone” reaching some 30km into Syria where it plans to resettle more than three million Syrian refugees currently in Turkey.

One major concern for the international community is the fate of thousands of suspected IS prisoners, including many foreign nationals, being guarded by Kurdish-led forces in the region.

Turkey claims its forces and allied Syrian rebels captured Ras al-Ain’s town centre from the SDF on Saturday, but the Kurdish-led alliance denies it has fallen.

It has been under intense bombardment for days, with Turkish warplanes circling overhead.

Elsewhere, Turkey’s Syrian allies say they have seized strategically important roads 30km away from the border, and captured more than a dozen villages.

The SDF are facing numerous Turkish ground and air assaults along a stretch of the Turkey-Syria border about 75 miles (120km) long.

In a televised statement on Saturday, senior SDF official Redur Xelil demanded the US help protect them, describing it as a “moral obligation”.

“We don’t want them to send their troops to the frontlines… all we want is that they close the air space to Turkish planes and they can do this easily,” Mr Xelil said.

More than 20 SDF fighters were killed in clashes overnight, bringing the death toll to 74, the UK-based Syrian Observatory for Human Rights (SOHR) said. The SDF gave a lower figure of 45.

Separately, Kurdish media reports said Kurdish female politician Hevrin Khalaf had been killed, although it was unclear how she had died.

Turkey’s military said one of its soldiers had died and three others had been wounded.

Some 49 fighters with the pro-Turkish rebels (known as the Syrian National Army) have also been killed.

Twenty-eight civilians have died in Kurdish-held territory since Wednesday, many of them in the Tal Abyad area, according to SOHR.

Dozens have also been seriously injured. One hundred thousand people have already been forced from their homes, according to the UN, but aid groups warn the number could rise to 450,000.

The Kurdish-led administration in north-eastern Syria said more than 191,000 people had already been displaced.

The fighting has also forced Tal Abyad’s only public hospital to close.

Turkish sources say 17 civilians have been killed in Kurdish shelling on Turkey’s side of the border since the operation began – among them a Syrian baby.

What’s the reaction to the operation?

Kurdish leaders, whose militia fought with the US to defeat IS, accuse the US of stabbing them in the back after Mr Trump effectively gave Turkey the go-ahead to move into north-eastern Syria.

Mr Trump now says he wants the US to negotiate a truce between Nato ally Turkey and the Kurds. Turkish President Recep Tayyip Erdogan, however, says the military operation will continue.

Germany said on Saturday it was reducing its arms sales to Turkey over the operation.

President Trump has suggested he would be prepared to use sanctions against Turkey if necessary.

The SDF’s Redur Xelil warned on Saturday that the Turkish operation was “no longer threatening the revival” of IS but “rather it has revived it and activated its cells”.

It comes after five IS members escaped from prison in the Kurdish-majority city of Qamishli amid Turkish shelling on Friday. The same day the group said it was behind a deadly car bombing there.

On Saturday IS declared a new campaign in Syria, which it said was to avenge its members’ detention in Kurdish-run prisons.

The SDF say they are holding more than 12,000 suspected IS members in seven prisons, and at least 4,000 of them are foreign nationals. The exact locations have not been revealed, but some are reportedly close to the Turkish border.

Two camps – Roj and Ain Issa – holding families of suspected IS members are inside the “safe zone”.

On Friday the Kurdish-led authorities said discussions were under way on how to move the Ain Issa camp, which had been hit by shelling.

Turkey says it will take responsibility for the IS prisoners it found during its offensive.