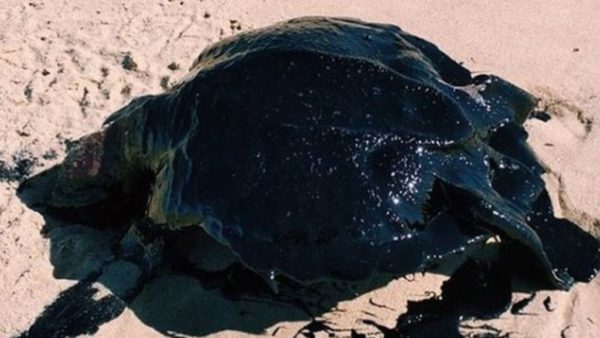 The source of large blots of oil staining more than 130 beaches in northeastern Brazil remained a mystery Tuesday despite President Jair Bolsonaro’s assertions they came from outside the country and were possibly the work of criminals.

Tamar, a group dedicated to the protection of sea turtles, said the oil spill was “the worst environmental tragedy” it has encountered since its formation in 1980.

The patches of oil began appearing in early September and have now turned up along a 2,000 kilometer (1,200 mile) stretch of Atlantic coastline.

“We are not in the presence of a constant leak. If it is the result of a shipwrecked oil tanker, the leaks will continue for the moment,” Bolsonaro told a news conference in Brasilia.

“It appears to be criminal. This oil could have been dumped at sea.”

Environment Minister Ricardo Salles, appearing alongside Bolsonaro, said the government’s priority is “to act quickly to remove what is on land and to deepen the investigation to find the origin.”

On Monday, Salles said after visiting the affected areas that more than 100 tonnes of oil have been removed from the beaches in the northeast.

State oil company Petrobras, which is taking part in the cleanup, said its analysis determined that the oil was neither produced nor marketed by the company.

The patches of oil have been detected in all nine states of northeastern Brazil, a poor region known for the beauty of its beaches and whose economy depends on tourism.

On Saturday, Bolsonaro ordered a swift investigation to “establish the causes and determine the responsibilities” for the spilled oil. The federal police announced last week that they were investigating the spills as an “environmental crime.”

Monday evening, Bolsonaro said Brazilian authorities had identified a country that the oil could have come from, but he did not name it.

Citing a confidential report, the daily Folha de Sao Paulo revealed that analysis by Petrobras showed the oil could have come from Venezuela.

But Bolsonaro refrained from singling out Brazil’s South American neighbor.

Bolsonaro has been a vocal critic of Venezuelan President Nicolas Maduro, and relations between the two countries are strained.

Bolsonaro has also lashed out at international critics who blamed him for massive forest fires in the Amazon basin in August and a broader failure to protect the world’s largest tropical forest.

Regardless of the source of the oil pollution, the government did not respond to the situation until last week.

“The government took too much time in reacting,” said biologist Mario Moscatelli, who said coastal ecosystems — the beaches, mangroves and coral reefs — are particularly vulnerable to oil spills.

“It’s fundamental that those responsible be identified and that they pay for the damage, environmental as well as economic,” he said.

“Without a firm reaction, this kind of episode could happen again,” he said.