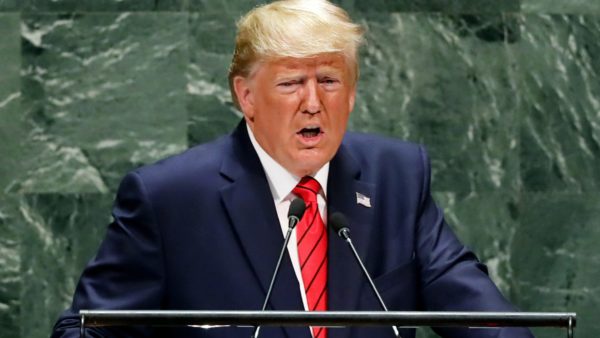 “All nations have a duty to act,” Trump said regarding his call to counter Iranian behavior. “No responsible government should subsidize Iran’s blood lust. As long as Iran’s menacing behavior continues, sanctions will not be lifted, they will be tightened.”

The Sept. 14 strikes on the world’s largest crude-processing plant and oil field forced Saudi Arabia to shut down half of its production operations. The drone attacks triggered the largest spike in crude prices in decades and renewed concerns of a budding conflict in the Middle East. While Tehran has been widely blamed for the attacks, it maintains that it was not involved.

On Friday, the Trump administration sanctioned Iran’s central bank in retaliation for the attacks. The Pentagon then announced a deployment of U.S. forces to the Middle East.

“The president has approved the deployment of U.S. forces which will be defensive in nature and primarily focused on air and missile defense,” Secretary of Defense Mark Esper said, adding that Saudi Arabia requested the support. “We will also work to accelerate the delivery of military equipment to the Kingdom of Saudi Arabia and the UAE to enhance their ability to defend themselves.”

Esper reiterated that the United States does not seek a conflict with Iran, and he called on Tehran to return to diplomatic channels. He also said there could be additional U.S. deployments if the situation were to escalate.

The Pentagon called the attacks on the Saudi oil facilities “sophisticated” and represented a “dramatic escalation” in tensions within the region.

Trump and Iranian President Hassan Rouhani have said they will not meet on the sidelines of the U.N. despite being in close proximity this week. Rouhani is slated to address the U.N. General Assembly on Wednesday.