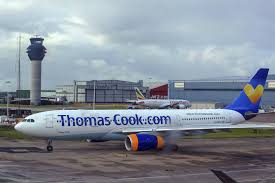 Newlyweds Kyle Walker and Francesca Angell had planned two weeks of sightseeing for their Los Angeles honeymoon: touring around Universal Studios Hollywood and Venice Beach. Shopping in Santee Alley. A side trip to Las Vegas.

But the couple instead spent much of Sunday on the phone, trying to figure out if and how they would be able to get back home to Nottingham, England, later this week, as the low-cost airline on which they had flown to the United States teetered into collapse — and their ticket home vanished.

“We’ve been frantically trying to figure out what to do,” Walker, 32, told The Washington Post. “It’s annoying, and it adds an extra stress on what should have been a nice, quiet, relaxing time.”

The swift collapse on Sunday evening of the Britain-based Thomas Cook, the world’s oldest tour operator, has jeopardized tens of thousands of jobs and stranded 600,000 travelers, prompting the British government to launch the largest peacetime repatriation effort in its history.

In an effort dubbed Operation Matterhorn, officials have begun dispensing dozens of charter planes across the world to return stranded passengers to the United Kingdom, through Oct. 6. After that, officials warn, passengers may need to book their own flights home.

Peter Fankhauser, Thomas Cook’s chief executive, said the company’s collapse was a “matter of profound regret.” He offered an apology to the company’s “millions of customers, and thousands of employees.”

Inevitably, perhaps, Britain’s political crisis has already cast a shadow on the company’s demise: Thomas Cook executives have blamed Brexit for the company’s troubles, while frustrated travelers and company employees have pointed to the government’s failure to bail out the firm. Others have said that it’s thanks to a European Union law that some travelers have the insurance to protect their vacation packages.

“In the UK, the political uncertainty related to Brexit over recent months has led to softer demand for summer holidays across the industry,” the company said in a May statement announcing $1.865 billion in losses.

British Prime Minister Boris Johnson called it a “difficult situation” and said his thoughts were with customers, according to CNN.

“One way or the other,” Johnson said, “the state will have to step in quite rightly to help stranded holidaymakers.”

But as Thomas Cook planes arriving at U.K. airports are already being seized on behalf of creditors and lenders, some are asking if that effort — at an estimated $750 million cost to taxpayers — could not have come earlier.

Johnson said the government had rejected the company’s bailout request of about $187 million, according to Reuters. Company executives, not the government, must be responsible for dealing with its finances, he said.

Len McCluskey, the general secretary for a union that represents some Thomas Cook employees, slammed Johnson for inaction and said the union will be seeking legal action over a “failure to consult on the redundancies that have resulted from the firm’s collapse.”

“Instead of stepping in and giving Thomas Cook the breathing space it needed to restructure its finances,” McCluskey said, “the government’s ‘do nothing’ attitude has left workers and customers high and dry.”

The 178-year-old company was started by a cabinetmaker, Thomas Cook, who organized rail trips for temperance supporters and Sunday schools starting in the 1840s. The voyages he planned were some of the first package vacation deals, and Cook went on to organize trips that drew thousands to London and then corners of Europe and the Middle East. With a catchy tagline — “Don’t just book it. Thomas Cook it.” — the company became a household name as a budget-friendly getaway option for the British middle class, expanding into hotels, resorts and retail stores.

But several poorly timed deals a decade ago left the company with more than $2 billion in debt, Reuters reported, as the company struggled to compete online and pitch itself to a new generation of travelers.

A 2016 coup attempt in Turkey, one of its top destinations, slashed business. So did a heat wave across Europe last summer that made many Brits stay home. To cover its interest payments alone, the company had to sell 3 million vacation packages a year.

The Guardian reported that Thomas Cook made a number of last-minute proposals to save the company, including asking lenders to reduce a nearly $250 million demand for additional funding and appealing to the British government for a bailout.

In a statement posted to its website at approximately 10 p.m. Sunday, the debt-ridden company said it had “no choice but to take steps to enter into compulsory liquidation with immediate effect.”

The company told CNN that it has 600,000 customers on vacation, including an estimated 160,000 from the United Kingdom.

The move is also expected to leave 21,000 employees without a job. On social media, many indicated that they had received no communication from Thomas Cook at all.

According to the New York Times, the British government is putting together a task force to help all the unemployed.

The chaos has also cascaded to hotels, like one in Tunisia that appeared not to let guests leave the premises if they didn’t pay additional fees.

“We’re being held hostage,” Ryan Farmer, a guest at the Les Orangers resort, told BBC. “We’ve been up to the gates, they had four security guards on the gates, holding the gates closed, and were not allowing anybody to leave.”

Hamed Hfaiedh, a night receptionist at the hotel, told The Washington Post that the incident was a misunderstanding. The hotel was due to be paid in part by Thomas Cook, and hotel officials were worried that they would not end up getting paid with the company’s impending collapse.

The gates to the hotel were later opened, BBC reported, though after one elderly woman paid over $2,400 in additional fees.

In Turkey, meanwhile, tourism authorities said that hotels cannot seek additional payments from customers, according to the state news agency.

Incidents like these have made for a messy and inauspicious end for the storied travel company. What started as a rail tour operated by Cook so many years ago ended in a final flight, leaving from Orlando, that landed in Manchester, England, around 3 a.m. Monday.