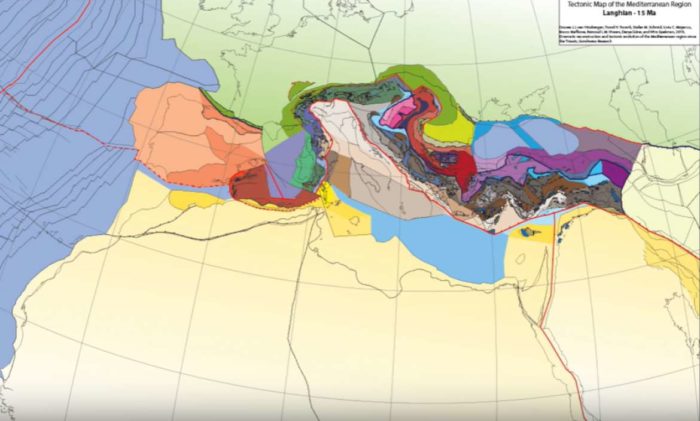 Atlantis may have scraped a reputation as “the lost continent,” but a newly-discovered land mass may be more deserving of the title. Describing their discovery in the journal Gondwana Research, researchers at the Universities of Utrecht, Oslo and Zürich have named this ancient continent—now buried under the Mediterranean—Greater Adria.

The announcement follows years of research and the most comprehensive reconstruction of the Mediterranean’s geological history, a process that involved extensive mapping of the region’s seas and mountain ranges over the last 240 million years. It was particularly challenging because geologically-speaking the area is incredibly complex—or, as lead investigator Douwe van Hinsbergen explained, it’s “a mess”.

“It is quite simply a geological mess: everything is curved, broken, and stacked,” van Hinsbergen, a professor in global tectonics and paleogeography at Utrecht University, said in a statement.

“Compared to this, the Himalayas, for example, represent a rather simple system. There you can follow several large fault lines across a distance of more than [1,200 miles].”

To unpick the evolution of the region, an international team of researchers collected and analyzed data from 2,300 paleomagnetic sites across more than 30 countries.

Advanced plate tectonic reconstruction software containing information on fault lines and magnetism enabled the team to peel the layers of the region one-by-one as far back as the Triassic period, approximately 240 million years ago. It was around then that a newly-discovered continent the size of Greenland, now called Greater Adria, began its journey as a distinct entity, split from supercontinent Gondwana.

“Most mountain chains that we investigated originated from a single continent that separated from North Africa more than 200 million years ago,” said van Hinsbergen.

“The only remaining part of this continent is a strip that runs from Turin via the Adriatic Sea to the heel of the boot that forms Italy.”

Most of Greater Adria was covered in water, with shallow, tropical seas containing deposited sediment like coral reefs. Indeed, some of this sediment is still visible to this day—in the form of mountain belts in the Apennines, the Balkans and parts of the Alps as well as parts of Greece and Turkey.

As the rest of the continent plunged into the Earth’s mantle—a process of destruction that began 100 million years ago—these sedimentary rocks were scraped off, leaving mountain ranges across the region as “deformed” remnants (or souvenirs) of the now-lost continent.

“Subduction, the plunging of one plate under the other, is the basic way in which mountain chains are formed,” said van Hinsbergen. “Our research provided a large number of insights, also about volcanism and earthquakes, that we are already applying elsewhere. You can even predict, to a certain extent, what a given area will look like in the far future.”

The beginning of the end for Greater Adria started some 100 million years ago, when it came into contact with what is now southern Europe. The collision with another tectonic plate forced it to submerge into the Earth’s mantle with only scrapings remaining above ground level. But while the continent is consigned to geological history, the findings do have present-day uses, the researchers say.