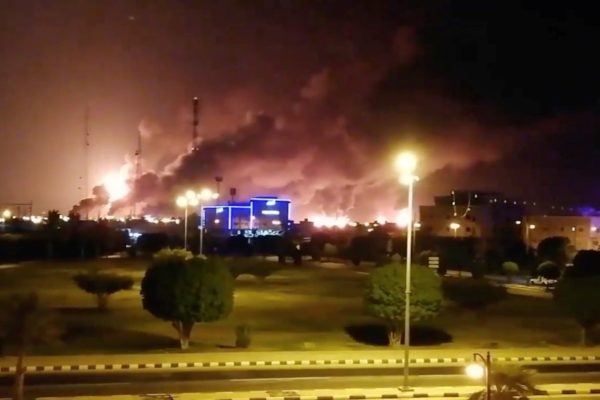 Smoke billowing after a fire at a Saudi Aramco factory in Abqaiq, Saudi Arabia, on Saturday. PHOTO: VIDEOS OBTAINED BY REUTERS/REUTERS
Share:
By
Summer Said and
Jared Malsin

Coordinated drone strikes on the heart of the Saudi oil industry forced the kingdom to shut down half its crude production on Saturday, people familiar with the matter said, potentially roiling petroleum prices and demonstrating the power of Iran’s proxies.

Yemen’s Iranian-aligned Houthi rebels claimed credit for the attack, saying they sent 10 drones to strike at important facilities in Saudi Arabia’s oil-rich Eastern Province. The production shutdown amounts to a loss of about five million barrels a day, the people said, roughly 5% of the world’s daily production of crude oil.

Officials said they hoped to restore production to its regular level of 9.8 million barrels a day by Monday.

The strikes mark the latest in a series of attackson the country’s petroleum assets in recent months, as tensions rise among Iran and its proxies like the Houthis, and the U.S. and partners like Saudi Arabia. The attacks could drive up oil prices if the Saudis can’t turn production back on quickly and potentially rattle investor confidence in an initial public offering of the kingdom’s national oil company.

President Trump called Saudi Arabia’s day-to-day ruler, Crown Prince Mohammed bin Salman, on Saturday and said the U.S. was ready to “cooperate with the kingdom in supporting its security and stability,” according to the Saudi Press Agency, the official news service.

Prince Mohammed told Mr. Trump that Saudi Arabia “is willing and able to confront and deal with this terrorist aggression,” according to the agency.

The attacks happened a few days before world leaders are set to gather in New York for the United Nations General Assembly, where President Trump has said he is interested in meeting Iranian President Hassan Rouhani to defuse tensions. Iran didn’t react to the attacks on Saturday, and officials have said Mr. Rouhani won’t meet with Mr. Trump until the U.S. lifts sanctions imposed after the president pulled out of the 2015 international nuclear deal.

Saturday’s attack was the largest yet claimed by the Houthis in terms of its overall impact on the Saudi economy, thrusting the petroleum industry into crisis in the world’s largest exporter of oil. The attack hit hundreds of miles away from their Yemen stronghold.

“The attack has been quite surprising for the mere amount of damage it caused,” said Fabian Hinz, an arms researcher at the Middlebury Institute of International Studies in Monterey, Calif.

“We have seen quite a few drone and missile attacks against Saudi infrastructure, but in most cases the actual damage caused has been quite minimal,” said Mr. Hinz.

The Saudi government called the strikes a terrorist attack and said it was investigating.

Analysts cautioned against accepting the Houthi claim of responsibility at face value. An attack in May on a Saudi oil-pumping station, which Saudi officials initially blamed on the Houthis and Iran, later turned out to have been launched by an Iranian-backed militia in Iraq, according to U.S. officials.

Saudi officials aren’t sure the attack emanated from Yemen and were discussing on Saturday the possibility that the attack came from the north, according to people familiar with the matter.

Saudi oil officials said they were rushing to contain the damage as fires raged in two major oil facilities. Saudi Aramco, the national oil company, held an emergency board meeting on Saturday to manage the unfolding crisis, the people familiar with the matter said.

Disruptions in Saudi oil production could have ripple effects through the global economy, as the kingdom exports more crude petroleum than any other country.

Saudi officials are discussing drawing down their oil stocks to sell to foreign customers to ensure that world oil supplies aren’t disrupted, the people familiar with the matter said. The people said Saudi officials were trying to restore the production soon but gave no firm timetable.

The attacks hit Hijra Khurais, one of Saudi Arabia’s largest oil fields, which produces about 1.5 million barrels a day. They also hit Abqaiq, the world’s biggest crude stabilization facility, processing seven million barrels of Saudi oil a day, about 8% of the world’s total.

The damage at Abqaiq has knock-on effects throughout the kingdom’s oil fields because it is a collection point for much of its industry, turning crude oil into specific grades requested by customers. The Ghawar field, the world’s largest, and Shaybah, which produces one million barrels a day, also reported disruptions because of Abqaiq’s problems, said the people familiar with the matter.

The Houthis took control of Yemen’s capital, San’a, in 2014 during a civil war. Since then, a Saudi-led coalition has fought a war to unseat the Houthis and reinstate a government supported by Saudi Arabia, the United Arab Emirates and other regional powers.

In recent months the Houthis, along with Iranian-backed armed groups in Iraq, have intensified a campaign of missile and drone attacks on Saudi Arabia, launching more than a dozen attacks at Saudi airports, a desalination plant and oil infrastructure. Suspected Houthi ordnance originating from the Yemeni border is launched at Saudi Arabia several times a week, a U.S. official said.

The strikes have put pressure on Saudi Arabia’s air defenses, as the Saudi government says it has shot down multiple drones and missiles.

The increasing sophistication of the drone and missile attacks this year have shown deepening cooperation between the Houthis and Iran as Tehran has sought ways to apply pressure on their Saudi and American adversaries, according to U.S. officials and analysts. The Iranian government denies controlling the Houthi movement.

A U.N. panel last year said there were “strong indications” that Iran was the source of Houthi missile and drone technology but didn’t directly accuse the Tehran government of providing the weaponry itself. It said Iran has failed to take the necessary measures to prevent such transfers.

Saturday’s attack also came amid a sharp escalation of hostilities in neighboring Yemen after a Saudi airstrike killed more than 100 people at a detention center on Sept. 1.

“We promise the Saudi regime that our future operations will expand and be more painful as long as its aggression and siege continue,” a Houthi spokesman said Saturday.

The strikes complicate U.N. and U.S. efforts to negotiate an end to the conflict, which has killed more than 10,000 people over the last four years. U.S. officials had quietly attempted to launch a back channel to the Houthis.

The Yemen war is a central front in a new and more aggressive foreign policy overseen by Prince Mohammed, who launched the intervention with a coalition of allied states in 2015. Under the prince’s watch, the kingdom also applied a blockade on neighboring Qatar, detained Lebanon’s prime minister, and sent a team of men to kill exiled journalist Jamal Khashoggi in Istanbul in 2018.

A conservative kingdom with a Sunni Muslim majority, Saudi Arabia has been an opponent of Iran in a struggle for power across the broader Middle East since the 1979 revolution that toppled Iran’s monarchy.

The drone attacks on Aramco’s facilities are poorly timed for Aramco’s coming IPO and pose a challenge to oil officials after a changing of the guard in their leadership. The country’s rulers recently replaced Aramco’s chairman and the kingdom’s oil minister.

Aramco last week picked seven international banks to help it list on Saudi Arabia’s domestic exchange, an IPO that could value the company at about $2 trillion dollars and come before the end of the year.

The damage to Aramco facilities could affect investor appetite to buy into the company and its ultimate valuation, said John Sfakianakis, chief economist at the Gulf Research Center in Riyadh, a privately funded think tank.

But Aramco, the world’s most profitable firm, could also use this crisis to demonstrate its growing push for transparency and keep potential investors abreast of developments, said Mr. Sfakianakis, a former adviser to the kingdom’s finance ministry.

“There will be short term concern…The latest IPO announcement is being watched by all,” he said.