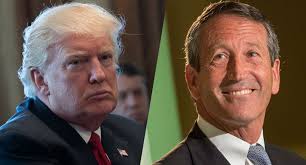 He announced his decision to run during an appearance on “Fox News Sunday,” telling host Chris Wallace that Hurricane Dorian disrupted his original plan to announce in South Carolina.

“I am here to tell you now that I am going to get in,” Sanford said of the GOP presidential primary. “I think that as the Republican Party we have lost our way.”

He said the “epicenter” of his campaign is focused on the national deficit.

“The president has called himself the ‘king of debt,’ has a familiarity and comfort level with debt that I think is ultimately leading us in the wrong direction,” Sanford said. “The numbers are astounding.”

Trump’s steadfast support from Republicans coupled with his massive campaign war chest has created a daunting path for those seeking to unseat him from within the GOP.

“You’ve got to know you basically have no chance of winning the Republican nomination,” Wallace told Sanford on Sunday. “So why run for president?”

Sanford responded that “you never know.”

“Once every four years, we have a chance to have a national debate on where we’re going next as Republicans and Democrats and as Americans,” he said. “And the thing that has been lacking in this debate has been an earnest and real conversation on debt and deficits and government spending.”

Sanford, 59, was first elected to the House in 1994 before serving as South Carolina governor from 2003 to 2011. His second gubernatorial term was plagued by scandal after he told his staff that he was going to hike the Appalachian Trail for a week but actually traveled to Argentina to engage in an extramarital affair.

Though he faced bipartisan backlash over the incident, he was elected to the House again in 2013. He was an outspoken critic of Trump during his most recent congressional tenure, drawing the president’s ire and likely causing him to lose reelection in 2018.

Asked for a response to Sanford’s decision to run, a Trump campaign spokesman provided ABC News with a one-word statement: “Irrelevant.”