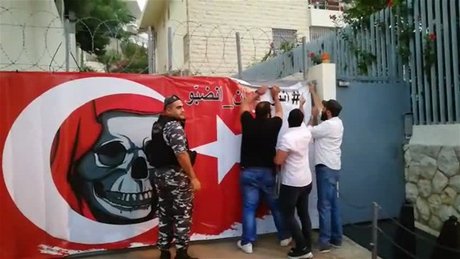 The Turkish Foreign Ministry has summoned Lebanese ambassador to Ankara  after several activists placed an anti-Turkey banner Thursday morning on the gate of the Turkish embassy in Rabieh, a suburb of Beirut  amid a row between Lebanon and Turkey over the 1516-1918 Ottoman administration of Lebanon.

The Foreign Ministry conveyed its concern to Lebanese envoy Gassan Muallim, saying a group of people being able to approach to the entrance gate of the consular service is worrisome in terms of the security of the Turkish mission.

Turkey also called on Lebanese authorities to take necessary security measures “without any delay” for the protection of all Turkish interests in Lebanon, especially Turkey’s Embassy in Beirut, the source said.

It is said that the provocateurs are members of the Omega Group affiliated to the Free Patriotic Movement political party of Lebanese President Michel Aoun.

On Saturday, Aoun had delivered a speech during the centenary of the founding of Lebanon, in which he accused the Ottoman Empire of “practicing state terrorism in Lebanon”.

“You too bug off”, said the banner, which shows a Turkish flag defiled with what appears to be the angel of death. The slogan emulates an anti-Israel term that Hizbullah chief Sayyed Hassan Nasrallah used in a speech in recent days.

The Lebanese Foreign Ministry on Tuesday summoned the Turkish ambassador to protest a Turkish statement that criticized President Michel Aoun over his latest remarks about the Ottoman era.

In its statement, the Turkish foreign ministry had strongly condemned Aoun’s remarks, describing them as “deeply regrettable and irresponsible.”

“President Aoun’s disregard for what happened during the (Western) colonialism period, through distorting history with hallucination and his attempt to put the blame on the Ottoman administration, is a tragic manifestation of his passion for surrendering to colonialism,” the Turkish statement said.

In a speech Saturday marking 100 years since the declaration of the State of Greater Lebanon, Aoun said “all attempts for liberation from the Ottoman yoke were met with violence, killings and the sowing of sectarian discord.”

“The state terrorism that the Ottomans practiced against the Lebanese, especially during World War I, led to hundreds of thousands of victims, who were killed by famine, conscription and forced labor,” the president added.

The Ottoman Empire ruled Lebanon from its conquest in 1516 until the end of World War I in 1918.