What life is like on the Syria-Turkey border, one of the most dangerous in the world 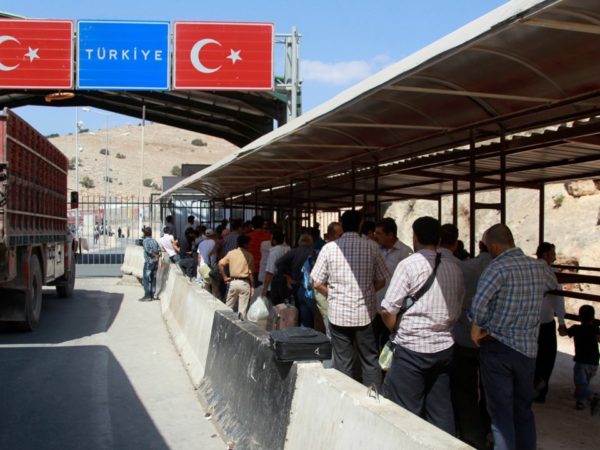 Syrians stand at a checkpoint at the border crossing of Bab al-Hawa at the Syrian-Turkish border on Sept. 23, 2014, fleeing from conflict and US air strikes. Ammar Abdullah/Reuters
Share:

Turkey’s involvement in the ongoing Syrian civil war is just one reason the border between the two countries is one of the most dangerous in the world. Millions of refugees fleeing the brutal regime of Syrian President Bashar Al-Assad and extremist groups like the Islamic State have fled the conflict, which has turned into a proxy war between Turkey, Russia, Iran, Israel, and the US.

Even before the Syrian civil war, Turkey and its southern neighbor, Syria, had a tense relationship, due in part to the presence in Syria of Kurdish groups affiliated with Kurdistan Workers’ Party (KPP) — which Turkey and the US consider a terrorist organization. The Kurdish militia are a crucial part of the US-led coaliation that defeated ISIS in Syria.

The Kurdish Institute of Paris estimates that about 12.2 million Kurds live in Turkey. Turkish authorities banned the Kurdish language, dress, and customs, leading to uprisings by the Kurdish people living in Turkey, and the formation of the PKK. The leader of the PKK, Abdullah Öcalan, has been imprisoned in Turkey since 1999, according to CNN.

The US says it has reached a deal with Turkey and will create a “safe zone” in northern Syria, The New York Times reported last week. Turkey will get its buffer against Kurdish forces in Syria, the US will try to prevent direct conflict, and Syrian refugees living in Turkey will be more easily pushed back into Syria, where destruction and danger awaits them.

As a potential new conflict looms, with Turkey threatening to invade northern Syria, life on the border is more unruly and dangerous than ever. Read on for more insight about what life is like on the border.

The border between Turkey and Syria has been an especially contentious area during the Syrian civil war, for two main reasons: the flow of Syrian refugees into Turkey, and the prevalence of PKK and Kurdish defense forces (YPG) in the northeastern part of Syria.

Kurds, an ethnic minority living mostly in Iran, Iraq, Syria, and Turkey, have long demanded their own independent state — sometimes using violence to make their point. Turkey considers the Kurdistan Worker’s Party (PKK) a terrorist group because of violent uprisings against Turkish authority.

The YPG, or the Kurdish People’s Protection Unit, have worked with US-led coalition forces and the Syrian Democratic Forces (SDF) to combat the Islamic State in Syria. While President Donald Trump declared victory over the Islamic State this year, the Department of Defense released a report saying IS was regrouping in Syria and Iraq. ISIS in Afghanistan is also a growing threat.

Gaziantep, Turkey, is a city about 40 miles from the Syrian border. Hundreds of thousands of Syrians have sought refuge there since the start of the Syrian civil war, and while Syrians and Turks mostly coexist there, there is some animosity for refugees as the city has grown more crowded and that housing prices have gone up. Some violence by ISIS also contributed to the animosity.

Diplomatic ties between Syria and Turkey have deteriorated steadily since the start of the civil war. Turkey’s embassy in Damascus, Syria, closed in 2012, citing security concerns.

The rise of the Islamic State in Syria led to Turkey’s formal involvement in the Syrian civil war, starting in August 2016. Previously, Turkey had allowed Syrian rebels to train and regroup within its borders, but the increasing prevalence of ISIS and the YPG forces near Turkey’s southern border prompted Turkey’s military involvement. Turkey formally ended its Operation Euphrates Shield in 2017; however, the Turkish government and military continue to be enmeshed in the conflict.

At present, the US and Turkey are setting up a base of operations to establish a future “safe zone” and to ostensibly prevent a threatened Turkish incursion into northern Syria. No details about the “safe zone,” such as where it will be and when it will be established, have been revealed by either side. 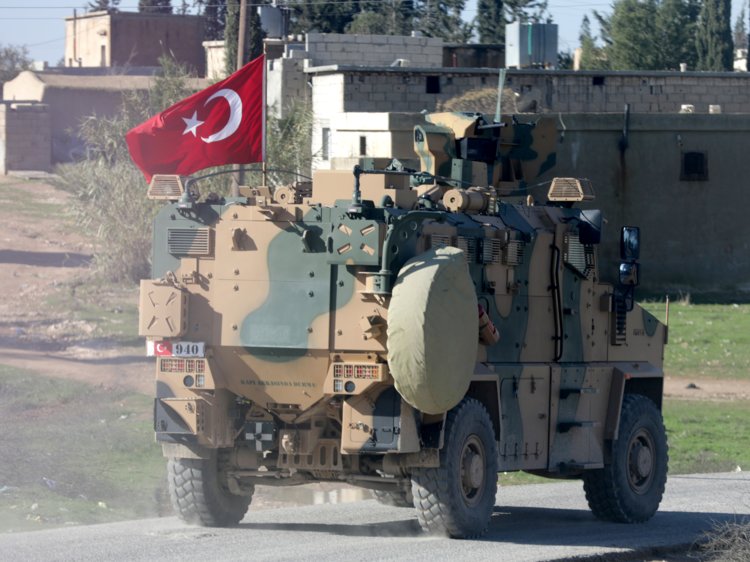 The Syrian refugee crisis has sent millions of refugees to surrounding countries like Lebanon and Turkey, as well as to countries in the European Union, like Germany.

As Turkey’s economy continues to struggle, both opposition politicians, and the ruling party have blamed refugees and promised to repatriate them hastily to a failed state where many face arrest, torture, and death, either by the regime or from extremist groups like Hayyat Tahrir al-Shams or al-Nusra. Deportations of Syrian men from Istanbul have been on the rise.

The refugee camp at Kilis, Turkey, was hailed as a model for refugee camps — organized, well-run, clean, and humane. It was built by the Turkish government — not the United Nations, as many refugee camps are. But Turkey also got around many international requirements for accepting refugees, like guaranteeing them the right to work and travel freely, and guaranteeing that the government will not deport them back into unsafe conditions, by referring to Syrians who fled to Turkey because of the Syrian civil war as guests with temporary protected status rather than refugees.

Nusaybin, Turkey is a flashpoint city in the conflict between Turks and Kurds. Fighting there began in 2015. Nusaybin is a predominantly Kurdish city with a population of about 120,000, with political significance for Kurds. It is also an important location for Turkey, due to its proximity to the Syrian city of Qamishli. About 6,000 buildings were destroyed there in 2016, residents believe, by Turkish security forces.

A wall between Syria and Turkey extends across 764 km of the 911km border to keep the Islamic State and the PKK at bay. It was completed in 2018.

Afrin, another Kurdish enclave, has been the target of Turkey’s Operation Olive Branch, which started in January 2018 and displaced 137,000 people, Human Rights Watch reports. Citizens of Afrin also had their homes looted and occupied by Turkey-backed Free Syrian Army groups.

Kobane, or Ain al-Arab, Syria, is situated near Syria’s northern border and was the site of one of the Islamic State’s major offensives, in 2014. ISIS combatants killed around 200 civilians, and the fighting displaced around 100,000.

Sanliurfa is an ancient city that’s now home to a number of Syrian refugees. Among the ruins of the world’s oldest known temple and ancient city walls, Syrian refugees attempting to build a life there, and extremist groups target vulnerable Syrian youth. 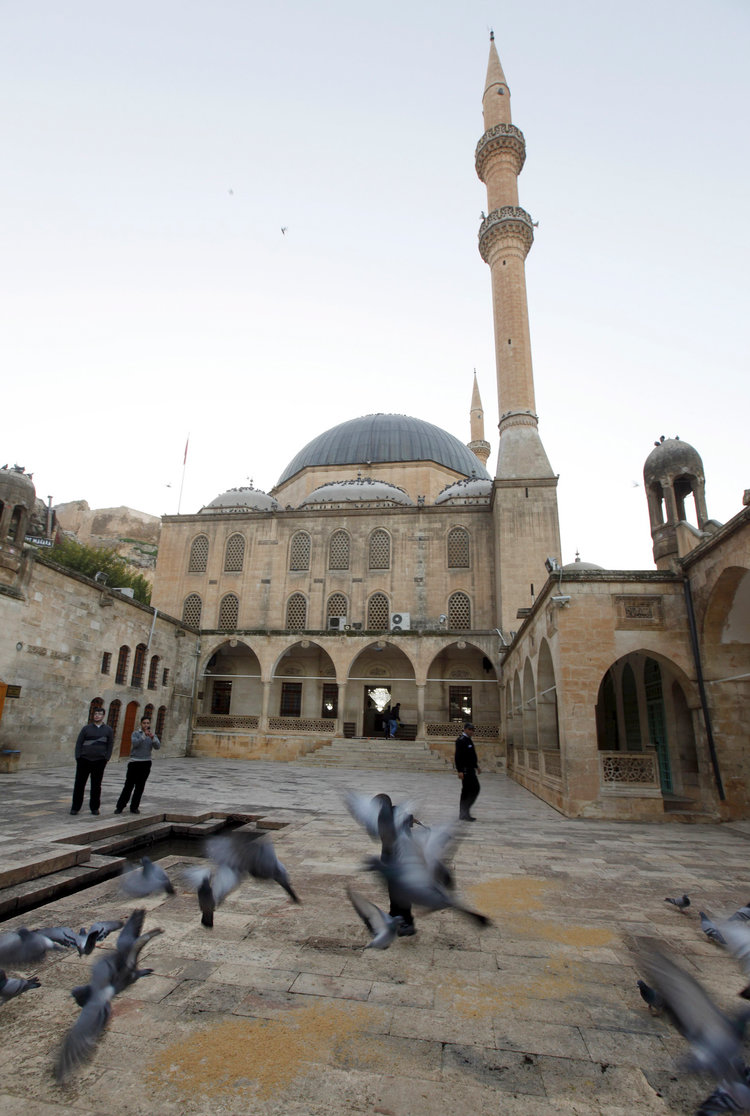 People walk near pigeons in front of Halil-ur-Rahman mosque, built by the Ayyubids in 1211, in the southeastern city of Sanliurfa November 27, 2012. Sanliurfa is believed to be the birthplace of Prophet Ibrahim, who was born in a cave near the mosque. According to legend, Prophet Ibrahim was thrown by catapult into a fire which turned into water, with the burning embers turning into fish. The site is known as the Pool of Sacred Fish and is located near the mosque.

Ras al-Ayn, Syria, has been a site of struggle throughout the Syrian civil war. In 2012, Syrian rebels fought government forces there. Then, in 2013, the fighting was between Syrian rebels and Kurdish militia. Then came an Islamic State attack in 2015. Skirmishes between the Syrian Democratic Forces and Turkey continued into this summer. 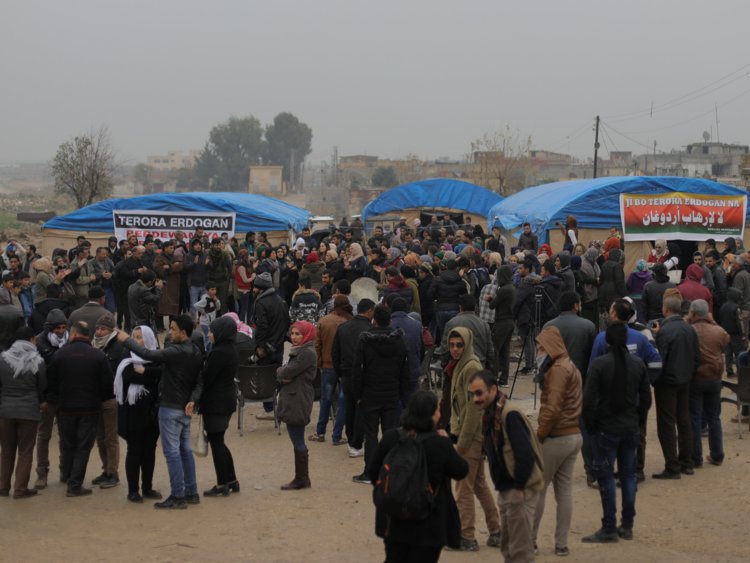 The Syria-Turkey Friendship Dam was meant to solidify ties between the two countries before the Syrian civil war stretched them to a breaking point. Construction on the dam, located on the Orontes river, in 2011. It has not yet been finished.

Syrians who once streamed through the Bab al-Hawa border crossing to safety in Turkey are now being forced back through, according to reports of forced deportations of Syrians from Turkey. Bab al-Hawa is located in Idlib, the site of attacks by regime forces. Idlib is also overrun with militants from groups like Hayat Tahrir al-Shams, a coalition of militant groups that was once affiliated with al-Qaeda. In 2018, some US and British aid groups stopped using the Bab al-Hawa border crossing because of reports that the taxes being levied on trucks carrying aid supplies were funding HTS.

The Berlin-Baghdad railway was meant to go from Berlin, Germany to Baghdad, Iraq, traveling through Turkey and Syria along the way. Construction took from 1903 to 1940; the train ran though Gaziantep Turkey and Aleppo, Syria on its way to Baghdad. Parts of the rail were still in use as of 2010. 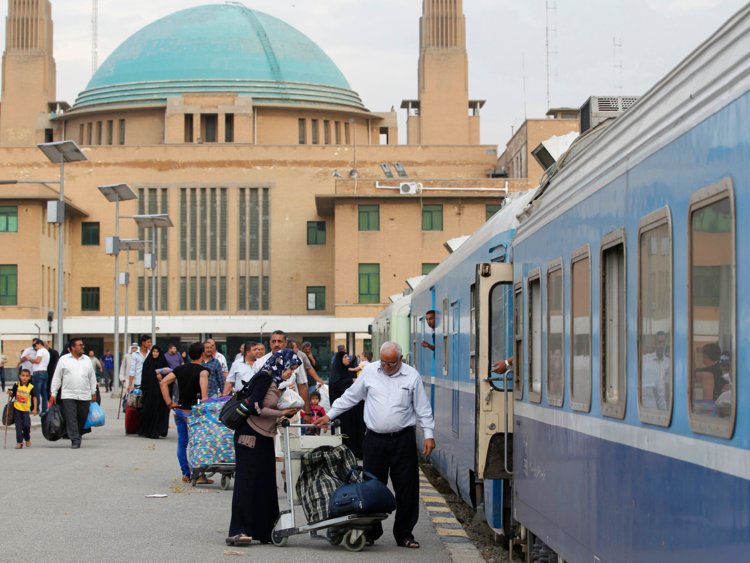 Passengers get on a train heading to Basra, at a train station in Baghdad May 6, 2013.