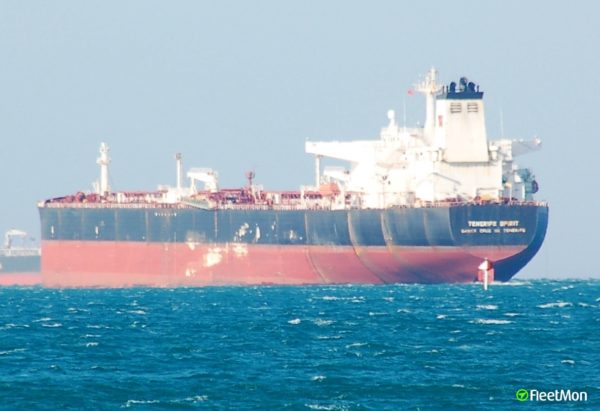 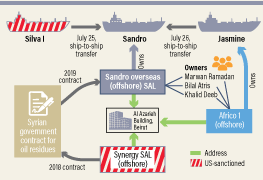 Tracking data and business records indicate a pair of shadowy Lebanon-based companies own and operate tankers illicitly transporting Iranian oil in the eastern Mediterranean. While there is no direct indication on the accounts, an analysis of one of companies involved suggests the man running the operation may be a prominent Syrian businessman sanctioned by the United States.

Data from TankerTrackers.com, a US company closely tracking Iranian oil shipments, shows that the tankers Sandro and Jasmine have taken Iranian oil on board from other vessels off Syria’s coast after turning off their location transponders.

Iran regularly uses “ghost ships” – tankers that have turned off their location transponders to obscure their movements – to carry out ship-to-ship transfers of oil in a bid to evade US sanctions on both Iran and Syria.

On July 25, the Iranian-flagged Suezmax tanker Silvia I, which is sanctioned by the US, conducted a ship-to-ship transfer of oil to the Sandra tanker a little under 20 kilometres off Syria’s coast, according to TankerTrackers.com.

Approximately 500,000 barrels of crude oil were delivered to the Sandro, TankerTrackers.com co-founder Samir Madani told The National. Since this ship-to-ship transfer, the Sandro has remained near Syria’s coast, Mr Madani added.

The Sandro’s suspicious activities in the Mediterranean began after Lebanese firm Sandro Overseas (Off Shore) SAL became the registered owner and commercial manager of the vessel on May 30.

Five days later, the Sandro turned off its transponder south of Limassol, Cyprus, and since then has not reported its position, effectively disappearing from public sight.

However, TankerTrackers.com has used satellite imagery to track the vessel’s activities.

On June 26, the Sandro received approximately 350,000 barrels of refined oil from the Iran-flagged tanker Jasmine, TankerTrackers.com said, adding that the firm “could not see where the Sandro then took that oil cargo.”

The Jasmine is already on the radar of the US government for its illicit activities. On March 25, the US Treasury included the vessel on a list of tankers that have carried out ship-to-ship transfers of petroleum destined for Syria. It stopped short of sanctioning the vessel.

Similar to the Sandro, the Jasmine has gone dark in the Mediterranean. It too is owned by a Lebanese firm. Africo 1 (Off-Shore) SAL became the registered owner and ship manager of the vessel on February 26. Further commercial links exist between the tankers.

The two Lebanese firms that acquired the Sandro and Jandro share the same owners, according to corporate records reviewed by The National. These records reveal that Sandro Overseas (Off Shore) and Africo 1 (Off-Shore) came under new ownership in December 2018 and January 2019.

The firms’ former legal representative told The National that the two companies, founded in 2011, were long dormant when they changed hands.

Neither firm engaged in maritime shipping under their previous owners, he added.

The three new listed owners of these companies – Marwan Ramadan, Bilal Atris and Khalid Deeb – are Lebanese nationals in their 30s who reside in central Beirut, according to copies of their IDs obtained by The National. They could not be reached for comment.

Little information is publicly available on Sandro Overseas (Off Shore) and Africo 1 (Off-Shore).

In its analysis of the controversy, the Syria Report business newsletter said that there is a “high probability” that Sandro Overseas (Off Shore) is affiliated to Samer Foz, one of the most prominent businessmen in Syria.

By winning the contract, Sandro Overseas (Off Shore) is set to replace another Lebanese company, Synergy SAL Offshore, which processed eastern Syria oil residues in 2018.

Like it successor for the contract, Synergy SAL Offshore has been involved in Iranian oil shipments.

In June, the US sanctioned Synergy SAL Offshore for facilitating the shipment of Iranian oil to Syria.

“Synergy SAL (Offshore) has shipped tens of thousands of metric tons of Iranian oil into Syria in the past year by sea,” the US Treasury said in a press release.

There is also another tie between Synergy SAL (Offshore) and Sandro Overseas (Off Shore).

Both firms share the same address in downtown Beirut’s Al-Azarieh Building office complex, according to their corporate records. The National visited the address, a company providing virtual offices and co-working spaces.

Neither Synergy SAL Offshore nor Sandro Overseas (Off Shore) were present at the location.

Africo 1 (Off-Shore) also uses the Al-Azarieh Building as an address and was also not present at the office complex.

In another indication of Mr Foz’s involvement, when The National phoned the number listed on a Synergy SAL Offshore letterhead, the recipient denied the number was for the company. Instead, the receptionist said the number belonged to a different Beirut-based firm that corporate records lists Mr Foz as a part-owner.

Lebanese corporate records reviewed by The National showed that the other firm is minority-owned by Bashar Assi, a top Syrian businessman sanctioned by the EU in January 2019 for his role in Mr Foz’s business ventures.

The US sanctioned Mr Foz in June, accusing the businessman of “profiting heavily from reconstruction efforts in Syria, including through luxury developments on land seized by the Syrian regime from its own people.”

“Samer Foz, his relatives, and his business empire have leveraged the atrocities of the Syrian conflict into a profit-generating enterprise,” the US Treasury Department statement said.