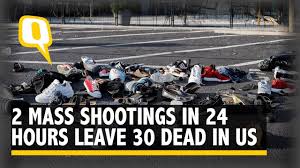 AT least 30 people have died in two US mass shootings in just 12 hours.

Twisted gunman Patrick Crusius used an AK47-type weapon to gun down parents and kids in a packed Walmart in El Paso, Texas, yesterday in what cops are now treating as an act of domestic terrorism.

The 21-year-old, who posted a horrifying anti-Mexican manifesto just 20 minutes before storming the store, killed 20 people after mowing down those inside aisle-by-aisle.

A further 26 people were injured in what has become the deadliest mass shooting of 2019.

The Ohio shooter was formally named as Connor Betts, 24 years old, from Bellbrook.

Police named all nine victims – including his own 22-year-old sister Megan Betts.

Six of the nine victims were African-American and police have said they don’t think it was targeted discrimination because of the short timeline of the massacre – but added they aren’t ruling it out.

Betts was killed by police less than a minute after he opened fire with a .223-caliber rifle on innocent revellers enjoying a Saturday night out at 1am.

Police have no confirmed a motive.

Betts’ former high school principal Chris Baker told Dayton Daily News how the Ohio shooter was suspended from school for writing a “hit-list” on a bathroom wall, sparking a lockdown.

In a press conference, Mayor Nan Whaley said: “The gunman was wearing body armour and a had a .223-calibre high capacity magazines and extra magazines.”

WHAT WE KNOW SO FAR

In Texas, Crusius, a “white supremacist” from Allen, was detained at the scene and is suspected of posting a sick race-hate manifesto online which railed against “race mixing”.

In the manifesto, titled The Inconvenient Truth, he also called on the deportation of immigrants and urged authorities to “send them back”.

He also wrote how he was “inspired” by the Christchurch massacre in New Zealand that left 51 dead in March.

Just before 11am local time (6pm BST) he stormed through the front entrance of the capacity-filled supermarket and opened fire on families.

His bloody 20-minute shooting spree left at least 20 people dead while 26 people were hospitalised – including a four-month-old baby.

Crusius, wearing ear defenders and cargo trousers, later went on to tell investigators he wanted to shoot as many Mexicans as possible, according to ABC News.

Copies of his race-hate document were shared on social media before the massacre.

He is said to have written that he “can’t wait any longer” before adding “f*** this is going to be so s***” and that “he’ll probably die today”.

It is the eighth-deadliest mass shooting in US history – and the deadliest of the 21 attacks in the United States this year.

Governor Greg Abbott called the killing spree in the Texas border city “one of the most deadly days in the history of Texas.”

Details of the victims have slowly begun to emerge – including a hero mum who was gunned down as she protected her baby.

Jordan Anchondo, 25, was fatally shot while holding her two-month-old son, her sister said.

Heartbroken Leta Jamrowski, 19, added that her baby nephew suffered broken bones as the mum-of-three fell to the ground.

She said: “From the baby’s injuries, they said that more than likely my sister was trying to shield him.

“So when she got shot she was holding him and she fell on him, so that’s why he broke some of his bones.

“So he pretty much lived because she gave her life.”

Distraught Ms Jamrowski added that she fears her brother-in-law Andre Anchondo was also among the dead as he has not been in contact.

Family of Arturo Benavides, 67, tragically confirmed to KTSM he is one the victims of the El Paso shooting.

Mexican authorities confirmed three of its citizens were killed – although they have not been named.

A further nine have been injured as three have identified as Mario de Alba Montes, 45, Olivia Mariscal Rodriguez, 44, and Erika de Alba Mariscal, 10, was injured in the leg.

It comes as his former schoolmate branded him a “weird nerdy boy” who “always stuck with his own race”.

Paige Ortiz went to school in Plano, Texas, with the mass shooter and said “people thought he was weird”.

She told The Sun Online: “People thought he was weird – people had caught him picking his nose and eating scabs and stuff like that.

“I just don’t know what he was thinking going into a Walmart and gunning down so many wives, fathers, children, mums and dads.

“I feel like he may have been bullied. Our school was diverse, however everyone usually fitted in somewhere.”

Six of the nine victims were African American

On LinkedIn, Crusius wrote he “wasn’t motivated” and said “working generally sucks” before adding that he is simply going to “go with the wind”.

He also revealed he spends “eight hours every day on the computer” which will help “count towards technology experience”.

Meanwhile, US rock band Blink-182 were “locked down” in an El Paso hotel following the mass shooting.

The group had been due to play a show at the UTEP Don Haskins Arena tonight but the gig has been postponed.

Vocalist Mark Hoppus wrote on Twitter: “We are locked down in our hotel in El Paso.”

The band later announced the gig was postponed in light of the events, writing on Twitter: “Following today’s terrible tragedy in El Paso we are postponing our Sunday show in solidarity with the community.”

The Ohio shooter is believed to have opened fire near Ned Peppers Bar in the city’s Oregon district just after 1am.

The Mayor confirmed that 27 people had been injured, including 16 who were taken to hospital. Some are believed to be undergoing surgery.

She later confirmed 15 of those had been released.

They said some people suffered multiple gunshot wounds, and others were injured as they fled.

Describing the Ohio shooting – 1,500 miles away – Lieutenant Colonel Carper said the shooter opened fire at the Ned Peppers Bar in the Oregon district.

He tweeted via the Dayton Police Dept: “The shooter is deceased. There are 9 others also deceased.

“At least 16 others went to area hospitals with injuries.”