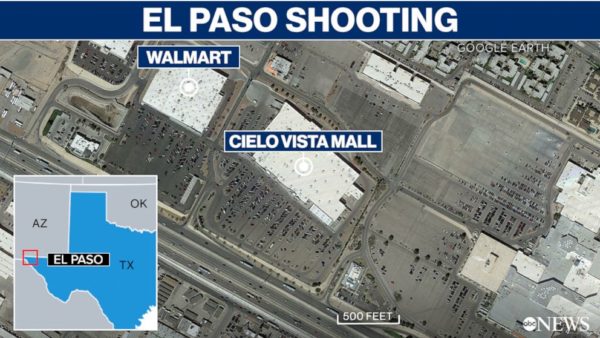 A Texas mother likely died trying to protect her baby boy from gunfire as Patrick Crusius unleashed one of America’s worst gun massacres on back-to-school shoppers.

The 19-year-old Jamrowski said Anchondo, a mother of three, was possibly trying to shield her 2-month-old son and fell on him as she was shot.

She said the boy suffered broken bones and is being treated at an El Paso hospital. Jamrowski said the child “pretty much lived because she gave her life.”

Jamrowski paced inside a waiting room at the hospital awaiting word of both her nephew’s condition and whether her brother-in-law, Andre Anchondo, survived the attack at a busy El Paso shopping area.

Wearing earmuffs for sound protection, Crusius, who lived a nine hour drive or more than 1000km away in Dallas, spent 20 minutes shooting on a sunny Saturday before calmly handing himself over to police “without incident”.

He was then captured on the store’s CCTV cameras, which showed him in cargo pants and black T-shirt as he raised his gun and fired at the Cielo Vista Mall, injuring at least 26 and killing 20.

The victims ranged in age from 82 years to just a four months old. Also injured were a two-year-old child and a nine-year-old. Mexican President Andrés Manuel López Obrador said three Mexican nationals were among those killed. At least nine of the injured were in critical condition.

The assault began about 11am local time, the store packed with about 1000 shoppers.

“On a day that would have been a normal day for someone to leisurely go shopping turned into one of the most deadly days in the history of Texas,” said Governor Greg Abbott.

BLINK182 CAUGHT UP IN SHOOTING

Rock band Blink-182 was put on lock down at an El Paso hotel during the shooting.

Blink frontman Mark Hoppus kept his 2.8 million Twitter followers apprised of the situation, writing, “over the intercom system they just announced that there are reports of another active shooter directly across the street at a location different from the first shootings.” Police later assessed there was no second incident, but Hoppus, the band and crew saw the panic firsthand.

As Hoppus described: “We were leaving breakfast when our security texted that there was an active shooter at the mall we were headed to. Saw dozens of police cars on the freeway and surface streets. Helicopters. We got back to the hotel and turned on the news to see what was happening.” Blink’s show at UTEP Dan Haskins Arena, scheduled for Sunday, has been postponed “in solidarity with the community,” the band stated on its social media channels.

Police are probing whether a racist screed posted online before the shooting was written by the suspect.

El Paso Mayor Dee Margo has confirmed police are investigating the suspected ‘manifesto’. In it, the writer expresses concern that an influx of Hispanics into the United States will replace ageing white voters, potentially turning Texas blue in upcoming elections and swinging the White House to the Democrats. The writer is also critical of Republicans for what he described as close ties to corporations and degradation of the environment.

Though the writer denied he was a white supremacist, the document says “race mixing” is destroying the nation and recommends dividing the United States into territorial enclaves determined by race.

After the shooting victims were filmed being wheeled out of the supermarket on shopping trolleys.

Witnesses who described the horror said Cruscius “started shooting everyone, aisle by aisle, with rage”.

Panic was unleashed in the crowded store, with a Walmart worker named Leslie describing the scene to local TV station KTSM.

“I thought it was just like loud boxes being dropped or something, until they got closer and closer,” she said.

“That’s when I looked at my co-worker, and we looked at each other, like shocked and scared.

“I got all the people that I could, I even found a little girl that was missing from her parents, and I got her, too. I tried to get as many people as I could out.”

A woman named Vanessa told Fox News she was walking into Walmart when she heard what she describes as “fireworks, really loud fireworks.”

“You could hear the pops, one right after another and at that point as I was turning, I saw a lady, seemed she was coming out of Walmart, headed to her car,” she said.

“She had her groceries in her cart and I saw her just fall.”

The alleged gunman is taken away after his arrest. Picture: TwitterSource:News Corp Australia

US President Donald Trump responded to the incident on Twitter.

“Terrible shootings in El Paso, Texas. Reports are very bad, many killed … God be with you all!”

It was the 249th gun massacre this year in the US and the most deadly since the 2017 Las Vegas massacre that killed 59. It was one of many recent attacks on public spaces in the US and came amid heightening tensions ahead of next year’s election.

Last Monday, two people were killed by a dissatisfied worker at another Walmart in Mississippi. Less than a week ago, three were killed and 15 injured at a garlic-themed food festival in California.

And 12 were killed at a government building in Virginia Beach in May, while a month earlier there was a synagogue attack by an anti-Semite in California that killed one person.

Former Australian deputy prime minister Tim Fischer said Americans must stand up to the gun lobby after the latest atrocity.

“Still nobody directly calls out the real problem and the National Rifle Association policies and priorities and its controversial CEO Wayne LaPierre,” Mr Fischer told AAP.

“Until the state and federal congresses stand up to the NRA no real progress will be made.

“In the meantime Australia’s DFAT should upgrade the smart traveller site to reflect the dangerous situation in the USA re guns.” Mr Fischer has called on journalists to bail up US Secretary of State Mike Pompeo who is in Sydney on Sunday and ask directly why tourists should risk their lives in travelling to the USA.

He said Mr Pompeo should also be asked why the US doesn’t at the very least adopt background checks for gun purchases and limitations on assault weapons. Mr Fischer was instrumental in helping the Howard government introduce sweeping gun reforms and an amnesty in Australia after the Port Arthur massacre in 1996 when 35 people were killed by a single gunman with a semiautomatic weapon.

People gather in Juarez, Mexico, in a vigil for the 3 Mexican nationals who were killed in an El Paso shopping-complex shooting. Picture: APSource:AP

A hero of the Walmart shooting has told how he tried to pick up and carry as many terrified children as he could and run to safety.

Military man Glen Oakley saw terrified people cowering in a Foot Locker store and children running without their parents, scared and alone as the shots rang out.

He told MSNBC that he pulled his own gun out as he heard the first gunshots but quickly his attention turned to the children and as he ran he picked up as many as he could and carried them to safety.

Glen Oakley, a hero of the El Paso shooting, helped save children caught up in the terror.Source:Supplied

Mr Oakley told MSNBC: “I see a whole bunch of kids running around without their parents, I got my bag in my hand I’m trying to pick up as many as I can and run out

“They’re so anxious, they’re dropping out of my hand.

“I made my way out and when I got out, I guess one of the cops thought I was the shooter so I had to show them I have a licence to carry.

Mr Oakley said he feared the police thought he was the shooter and he had to explain that he had a licence to carry a firearm.

A manifesto reportedly written by Crusius included anti-immigrant rhetoric with the writer going in-depth about why they’re “against race mixing.”

El Paso shooter clearly outlined his motives, political views, biography, and outlined his gear for the day of the attack on his computer.

Below is some of the manifesto he has written out prior to the attack today: #ElPaso #walmartshooting. His name is patrick crusius pic.twitter.com/fhV0hUi9tP

The suspect was quickly linked to a document titled “The Inconvenient Truth,” the document is an anti-immigrant screed that takes particular aim at the Hispanic community and expresses support for the Christchurch, New Zealand, shooter who opened fire at two mosques in March and killed 51 people. “In general, I support the Christchurch shooter and his manifesto. This attack is a response to the Hispanic invasion of Texas. They are the instigators, not me. I am simply defending my country from cultural and ethnic replacement brought on by an invasion,” begins the screed. The manifesto includes lots of white supremacist language, such as claiming that the writer was “against race mixing.” It hardly seems a coincidence, then, that the shooting took place in El Paso, a city that is just across the border from Mexico.

Crusius’ social media accounts were all taken down relatively quickly but not before some were able to detect that he liked a lot of alt-right content. He liked tweets that had the #BuildtheWall hashtag as well as “a photo using guns to spell out ‘Trump,’ and posts from Paul Joseph Watson, a far-right Youtuber who works with Alex Jones at InfoWars,” notes the Southern Poverty Law Center.