Bernie Sanders campaigned for $15 / hr min. wage, now his workers are demanding it 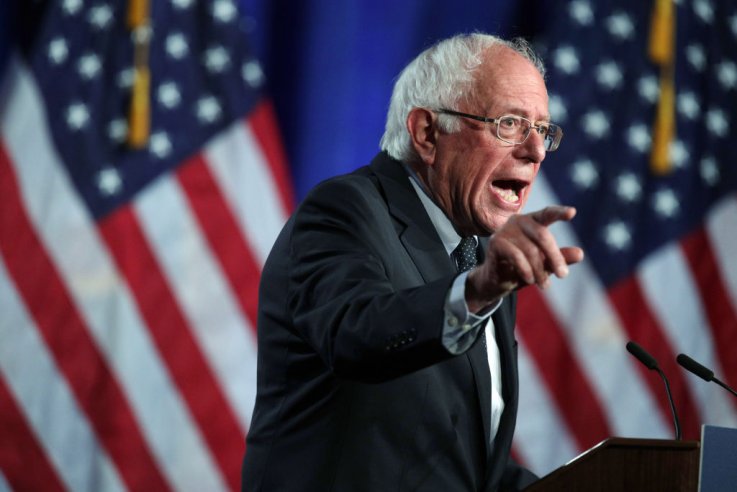 Campaign workers for Bernie Sanders have taken aim at one of the senator’s key policies in his 2020 presidential run — raising the federal minimum wage.

According to The Washington Post, some members of Sanders’ campaign team have been lobbying to raise their wages so that they make the $15 hourly rate that the Vermont senator has frequently called for both on the campaign trail and in Washington D.C.

The Post obtained a draft of a letter that the campaign’s union planned to send to Sanders’ campaign manager Faiz Shakir which read in part that workers “cannot be expected to build the largest grassroots organizing program in American history while making poverty wages. Given our campaign’s commitment to fighting for a living wage of at least $15.00 an hour, we believe it is only fair that the campaign would carry through this commitment to its own field team.”

The letter states that field organizers are working at least 60 hours a week, which lowers the average per hour pay to $13 an hour.

“Many field staffers are barely managing to survive financially, which is severely impacting our team’s productivity and morale. Some field organizers have already left the campaign as a result,” the letter said,

According to documents reviewed by the newspaper, the issues regarding wages extend back to May 2019, though talks between the campaign union and Shakir appear to be ongoing. It is unknown if Sanders is aware of the requests from campaign workers

Sanders’ campaign became the first to unionize, a move which was publicized in Mach 2019, just weeks after the senator announced his 2020 presidential run. Since then, Massachusetts Sen. Elizabeth Warren and former Housing and Urban Development Secretary Julian Castro have both unionized their campaign workers.

According to the agreement made between Sanders campaign and the union, which began on May 2, field workers were to be paid $36,000 annually rather than by hours worked. However, on May 17, the Post states that Shakir recommended that field organizer pay be raised to $42,000 during a staff meeting. In the same meeting, he also suggested that the work-week be extended to six days a week the union’s letter said.

According to the Post, the union rejected Shakir’s plan, in part because of the healthcare costs that would fall to the campaign workers to pay.

This month, workers used Slack — an instant messaging service utilized by many companies and organizations, including the Sanders’ campaign — to express distress at not being paid a “living wage.”

“I am struggling financially to do my job, and in my state, we’ve already had 4 people quit in the past 4 weeks because of financial struggles,” one worker told Shakir via the service, according to the Post.

Another said he needed a raise, “because I need to be able to feed myself.”

Shakir later responded to the messages, the Post said, telling workers they were owed an explanation about where things stood between the campaign and the union. He also expressed disappointment in the union voting against raising wages, saying, “I have no idea what debates and conversations were had, but candidly, it was a disappointing vote from my perspective. But the campaign leadership respected the union process and the will of the membership.”

According to the Post, the union plans to send a new proposal to the Sanders campaign that includes a $46,800 salary for field organizers and $62,400 for regional field directors. Regional directors currently make $48,000 a year.

The proposal also asks for the campaign to pay 100 percent of healthcare costs for workers who make less than $36,000 a year, and to pay 85 percent for those who make over $36,000.

The news over the negotiations come after the House of Representatives passed a bill to raise the federal minimum wage to $15 an hour. Following the vote, Sanders posted on Twitter to praise the House for passing the bill.