Hariri :We are committed to develop Lebanon’s maritime capabilities 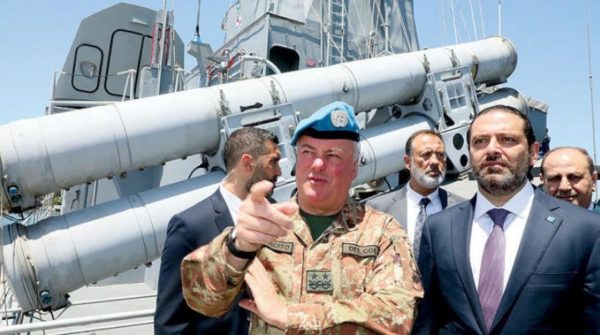 Lebanese Prime Minister Saad Hariri renewed his commitment to UN Security Council Resolutions 1701 and 2433, which stipulate that Lebanon should develop a plan for the enhancement and development of its maritime capabilities.

Hariri visited on Monday the UNIFIL Maritime Task Force (MTF) at the Beirut Port. He was welcomed by UNIFIL Head of Mission and Force Commander Major General Stefano Del Col.

The premier was briefed on a series of trainings and joint exercises conducted with the Lebanese Navy in close coordination with UNIFIL.

Hariri thanked UNIFIL and its Maritime Task Force for the work done in maintaining stability along Lebanese territorial waters and for the job they are doing in assisting the LAF Navy to enhance their capacities and capabilities.

He said: “My presence here today is to reaffirm the Lebanese Government’s commitment to UN Security Council Resolutions 1701 and 2433,” which call on Lebanon to develop a plan to increase the Lebanese naval capabilities.

“I am fully dedicated to further developing the capacities of the Lebanese Navy,” he underlined, adding: “Last week I was briefed on the final stages of this plan. I will do my utmost best to have it endorsed by the Council of Ministers before the 31st of August, the date of the renewal of the UNIFIL mandate.”

The UN Security Council adopted Resolution 2433 in August last year, calling on the Lebanese government to develop a plan to increase its naval capabilities, with the goal of ultimately decreasing the UNIFIL MTF towards a transitioning to LAF-Navy.

Del Col, for his part, emphasized the importance of the role of the MTF in coordinating activities with the LAF-Navy, saying: “UNIFIL’s support to the LAF-Navy is of paramount importance in monitoring territorial waters, securing Lebanese coastline and preventing the unauthorized entry of arms or related materials by sea into Lebanon as well as ensuring stability in the country.”