The rift in the U.S. – Turkey relationship may be permanent, analysis 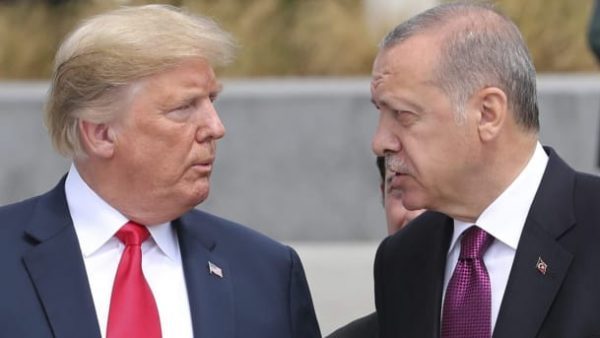 Analysis: U.S. officials say Turkey is no longer a reliable NATO ally. The Erdogan government’s receipt of a Russian air defense system is a turning point.

Turkey’s decision to ignore U.S. warnings and take delivery of a Russian-made air defense missile system could signal a permanent rupture in its alliance with Washington and will test President Donald Trump’s willingness to punish Ankara with sanctions, former officials and experts said.

“We are heading into a major crisis in U.S.-Turkish relations. I don’t think it’s going to get better any time soon,” said Eric Edelman, a former senior official who served as U.S. ambassador to Turkey from 2003 to 2005 and is now at the Center for Strategic and Budgetary Assessments think tank.

Cargo planes carrying parts for the S-400 system began arriving on Friday, Turkey announced, even though U.S. officials had told the government if it went ahead it could lose access to America’s F-35 stealth fighter jet, which Ankara has ordered, and face potentially harsh economic sanctions.

Turkish President Recep Tayyip Erdogan, who has been at odds with Washington over Syria and a range of issues, has insisted it was his country’s sovereign right to buy the Russian air defense system, despite vehement objections from the U.S. and fellow members of the NATO alliance.

Western officials fear Russian engineers setting up the S-400 system could spy on American-made fighter jets that fly out of the U.S. Incirlik Air Base in Turkey, but they also see the project as a bid by Moscow to undermine the transatlantic alliance. The Russian radar and surface-to-air missiles also are not compatible with NATO military hardware, and if Turkey deploys the new system, it will no longer have an integrated air defense network with NATO alliance members, U.S. defense officials said.

“This is emblematic of the greater shift in Turkey’s orientation away from the transatlantic alliance and its values, to the East and an authoritarian bloc of countries,” said Aykan Erdemir, a former member of the Turkish parliament and now senior fellow at the Foundation for Defense of Democracies think tank.

Ergodan has clashed repeatedly with the U.S. in recent years over his sweeping crackdown on dissent, Washington’s sanctions on Iran and Venezuela, and, above all, over American support for Kurdish forces fighting Islamic State militants in neighboring Syria — Kurdish forces Ankara views as part of a terrorist group. In January, the Turkish president refused to meet Trump’s national security adviser, John Bolton, after he said Erdogan’s government needed to provide assurances about protecting the safety of Kurds in Syria.

Asked for comment about the missiles, a senior administration official said, “We are aware of reports that Turkey has taken delivery of the S-400. As the president said at the [June] G-20 [summit in Osaka] ahead of meeting with Erdogan, ‘It’s a problem, there’s no question about it.’”

Before Erdogan, the U.S. had long seen Turkey as a vital democratic ally in the Muslim world and the Middle East that could be counted on as a steadfast partner. But current and former U.S. officials say Turkey is no longer a reliable NATO ally, and the Erdogan government’s insistence on pressing ahead with the Russian air defense system is a turning point that will leave permanent scars.

From now on, Turkey will likely be treated as “just another country that we have to deal with,” in which there are still common interests on discrete issues and disagreements on others, said Ilan Goldenberg, who worked as a senior official in the Obama administration.

The rift with Turkey could also shape the current crisis between the U.S. and Iran. In the event of a possible conflict with Iran, Turkey would likely reject a U.S. request to use air bases on its territory for bombing raids over the border, current and former officials said. “I have a hard time seeing the U.S. getting access to Incirlik for offensive operations inside of Iran,” Goldenberg said. In 2003, as the U.S. planned an invasion of Iraq, Turkey turned down a request from Washington to launch operations from its soil.

Erdogan shrugged off appeals not to buy the Russian weapons because he is gambling that Trump is not willing to crack down on Turkey due to its strategic position at the crossroads of Europe and Asia, Erdemir said. And the Turkish leader seemed to come away from a June meeting with the U.S. president at the G-20 summit in Osaka confident that was the case, he said.

However, though Trump has mostly shied away from penalizing Turkey over previous disputes, delivery of the S-400s has sparked outrage in Congress across the political spectrum that could bring damaging consequences for Turkey, according to Edremir.

“Erdogan might have left Osaka with the wrong impression about this whole issue,” he said. “Ultimately, when different parts of the U.S. policy machine get moving, Erdogan might be in for a surprise.”

Last year, the Trump administration imposed sanctions on two top Turkish government officials when Ankara failed to release a detained American pastor. Although the sanctions were mainly symbolic, it spooked Turkish traders and led to a damaging sell-off of the Turkish currency.

Turkey’s economy remains fragile, with unemployment rising to more than 14 percent — its highest level in a decade — persistent inflation and staggering levels of debt. If fresh U.S. sanctions are imposed, it could be devastating for an economy already under strain.

The Republican chairmen and ranking Democrats from the Senate Armed Services and Foreign Relations committees issued a stern statement on Friday, demanding to cut off Turkey from the F-35 program and calling for the imposition of sanctions.