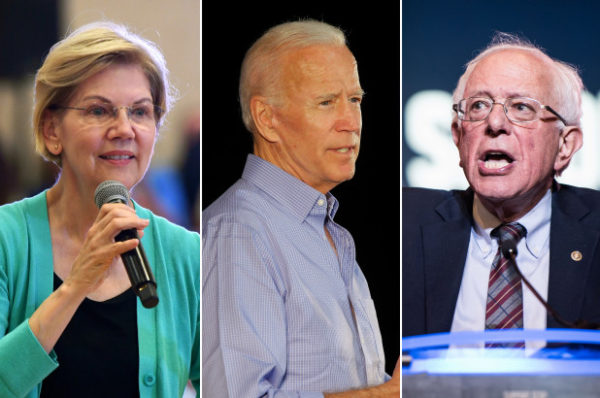 Former Vice President Joe Biden leads the president by 9 points among registered voters, 51 percent to 42 percent — outside of the poll’s margin of error of plus-minus 3.5 percentage points.

With more than 200 days until Iowa caucuses and more than 470 days until Election Day 2020, the poll is a very early snapshot of the general election, and much can change.

But Trump is faring worse than Barack Obama at this same stage of his re-election race.

Obama ended up winning the general election by 4 points, 51 percent to 47 percent.

Breaking down a Trump-versus-Biden race

Biden’s larger lead over Trump is largely due to the former vice president’s stronger performance among independent voters, whites and suburban residents than the rest of the Democratic field. In a Trump-versus-Biden contest, the president has the advantage with men (51 percent to 42 percent), white voters (50 percent to 43 percent) and whites without college degrees (56 percent to 37 percent).

Against the other three Democratic contenders, however, Trump runs even or slightly leads among independent and suburban voters, and his advantage with white voters is in the double digits.

President Trump’s job rating in the poll essentially matches his percentages in those hypothetical 2020 matchups.

Forty-five percent of registered voters approve of the president’s job, while 52 percent disapprove — which is broadly unchanged from the last several NBC/WSJ surveys.

The NBC/WSJ poll was conducted July 7-9 of 800 registered voters – more than half reached by cell phone – and it has an overall margin of error of plus-minus 3.5 percentage points.