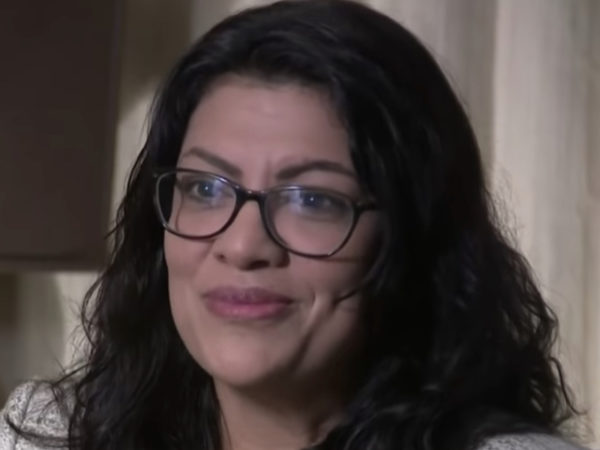 FILE PHOTO: A day after vowing to “impeach the motherf**cker,” Rep. Rashida Tlaib (D-MI) on Friday evening said President Donald Trump “has met his match” and “he’s just going to have to deal” with it.JAN 15, 2019
Share:

Rep. Rashida Tlaib stood firm in her conviction that President Trump will be impeached while speaking to an audience of liberals Saturday.

“We’re going to impeach the MF’er, don’t worry!” she said to huge applause at Netroots Nation, echoing a line from January that drew criticism for its profanity.

“I will not back down impeaching this lawless president. He will not be above the law and get away with it on my watch,” the Michigan Democrat said. “Stay strong. Stay strong on this. If we don’t call him out, if we don’t push for this … who is going to be the next crooked CEO that runs for president? You know they’re coming.”

Tlaib made waves in January when just hours after being sworn in she told a liberal gathering, “We’re gonna go in and impeach the motherf—er.”

Rep. Ilhan Omar, who appeared with Tlaib on stage, called Trump “the king of distraction.”

“It’s a constant pile of garbage that comes out of his mouth,” the Minnesota Democrat said. “He has pushed us down to a level of elementary — I think it’s not even elementary. It’s preschool playground.”

House Speaker Nancy Pelosi has so far resisted an impeachment inquiry into Trump, believing it could be risky for Democrats in the upcoming election.

Oregon Sen. Jeff Merkley said Friday he’s worried time is running out to impeach Trump but acknowledged that the Republican-controlled Senate is unlikely to hold a trial or convict Trump even if he is impeached by the House, which is majority Democrat.