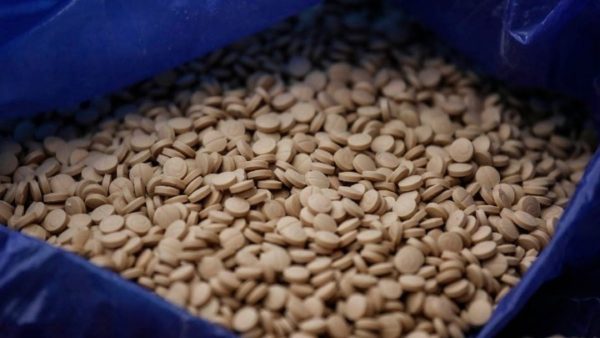 Greek authorities have seized what they described as the world’s largest single haul of super-charged amphetamine Captagon pills from Syria worth more than half a billion euros.

Coastguard and drug enforcement officers seized three containers full of the amphetamines, the financial crimes unit (SDOE) said on Friday. The operation involved 20 officers and landed 5.25 tonnes of the drug – 33 million Captagon pills – found in the containers shipped from Syria.

“It is the largest quantity that has ever been seized globally, depriving organized crime of proceeds that would have exceeded $660 million (587.45 million euros),” the financial crimes unit said in a statement.

Captagon is one of several brand names for fenethylline hydrochloride, a drug compound belonging to the family of amphetamines, stimulants of the central nervous system.

In the 1960s the drug was prescribed to treat narcolepsy and depression but by the 1980s the medical community determined that Captagon’s addictive properties outweighed clinical benefits and it was banned.

However, Captagon is a popular narcotic in the Arabian Peninsula and in war-torn Syria.

Syria became a major amphetamines exporter and consumer as the trauma of its civil war fueled demand and the breakdown in law and order created opportunities for producers.

Greek authorities were trying to determine if the shipment’s final destination was China, SDOE said, without providing further details.