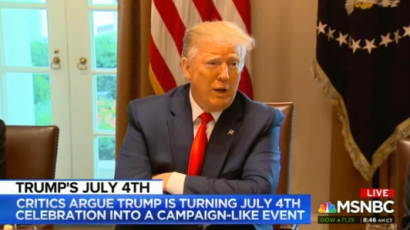 MSNBC will not air the entirety of President Trump‘s planned “Salute to America” on July Fourth, instead opting to carry on with regularly scheduled news programming that may include clips of the event.

A spokesperson for the network told Politico it potentially will air parts of the event during Thursday’s newscasts, which will continue normally with “The Beat with Ari Melber” airing live at 6 p.m. ET and “Hardball with Chris Matthews” at 7 p.m.

The network did not immediately return The Hill’s request for more information on its Thursday schedule.

Fox News, meanwhile, will air the entirety of Trump’s special July Fourth celebration during a live two-hour “Special Report” with Mike Emanuel as guest  host that is set to broadcast at 6 p.m. CNN, meanwhile, did not immediately respond to a request for comment but is currently set to air a documentary on white nationalism at 7 p.m., according to Politico.

Streaming channels such as CBSN and ABC News Live both reportedly plan to air the entirety of Trump’s remarks, while CBSN will cover the rest of the event as well.

Trump has promised to speak at the event and told reporters during a bill signing in the Oval Office that the event, which is set to include military tanks and a flyover from the new Marine One aircraft, “will be like no other.”

“We’re gonna have a great Fourth of July in Washington, D.C.,” the president said Monday.

Critics of the president’s plans for the holiday say Trump is inappropriately politicizing July Fourth and have warned about the high price tag for the event.