Trump: Public will ‘find out’ about U.S. response to Iran downing American drone 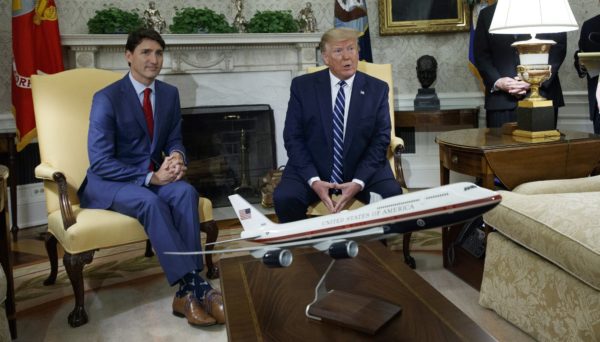 President Donald Trump on Thursday said the public will “find out” about a U.S. response to Iran shooting down an American military drone in the Persian Gulf that the president insisted was in international territory.

Asked at the White House about a U.S. response, Trump said, “Obviously, you know were not going to be talking too much about it,” before adding, “You’re going to find out.”

“Iran made a very bad mistake,” the president continued. “The drone was in international waters clearly. We have it documented.”

Trump’s comments, made at the White House during an appearance with Canadian Prime Minister Justin Trudeau, came hours after Iran said it downed drone and claimed it was in Iranian air space.

While Trump said the Iranian action was “a new fly in the ointment” and a “very foolish move,” he also said it might have been a “mistake.”

“I have a feeling that someone under the command of that country made a big mistake,” he said. “I find it hard to believe it was intentional. It could have been someone who was loose and stupid who did it.”

Trump added that it would have made a “big difference” if there had been a person in the drone.

The president’s earlier statement on Twitter that Iran had made a “big mistake” was the first official White House response to the downing of the drone, which occurred around 4 a.m. Thursday morning in Iran (just after 7:30 pm ET Wednesday evening).

A meeting was set at the White House for Thursday morning to discuss the U.S. response, according to two administration officials. Outgoing acting Defense Secretary Patrick Shanahan and his replacement, Mark Esper, were among those expected to attend.

At roughly the same time, House and Senate leaders and key committee chairs were scheduled to attend an Iran briefing to discuss their concerns and hear about the situation from officials, Pelosi told reporters Thursday.

Later in the day, Pelosi planned to hold a briefing for the House Democratic caucus with Wendy Sherman, who helped negotiate the Iran nuclear agreement that Trump withdrew from, and former CIA Director John Brennan.

Pelosi said Thursday that “high-tension wires are up in the region” and cautioned against any “reckless” moves by the U.S.

“We have to be strong and strategic about how we protect our interests. We also cannot be reckless in what we do. I don’t think the president wants to go to war. There’s no appetite for going to war in our country,” she said at her weekly news conference on Capitol Hill. “This is a dangerous neighborhood. A miscalculation on either side could provoke something that could be very bad in terms of security and our interests.”

Although both nations have acknowledged that the U.S. military drone was downed, they disagreed on whether it had violated Iranian airspace: Iranian’s Revolutionary Guard said it did, but U.S. officials disputed that, saying it was in international airspace.