Trump exaggerates growth as he launches his 2020 campaign 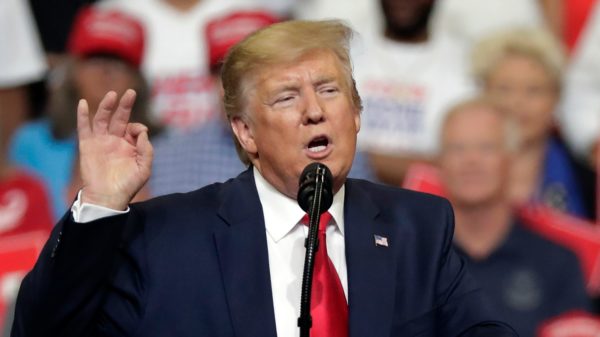 President Donald Trump officially opened his 2020 campaign Tuesday with a speech exaggerating what he’s done for the economy and against illegal immigration.

Some claims from his rally in Orlando, Florida:

TRUMP: “It’s soaring to incredible new heights. Perhaps the greatest economy we’ve had in the history of our country.”

THE FACTS: The economy is not one of the best in the country’s history.

In the late 1990s, growth topped 4 percent for four straight years, a level it has not yet reached on an annual basis under Trump. Growth even reached 7.2 percent in 1984.

While the economy has shown strength, it grew 2.9% in 2018 — the same pace it reached in 2015 under President Barack Obama — and simply hasn’t hit historically high growth rates. Trump has legitimate claim to a good economy but it’s not a record-breaker and it flows from an expansion that began in mid-2009.

TRUMP: “We’re going to have over 400 miles of wall built by the end of next year. It’s moving very rapidly.”

THE FACTS: That’s highly unlikely, and even if so, the great majority of the wall he’s talking about would be replacement barrier, not new miles of construction. Trump has added strikingly little length to barriers along the Mexico border despite his pre-eminent 2016 campaign promise to get a wall done.

Even to reach 400 miles or 640 kilometers, he would have to prevail in legal challenges to his declaration of a national emergency or get Congress to find more money to get anywhere close.

So far, the administration has awarded contracts for 247 miles (395 km) of wall construction, but that initiative has been constrained by court cases that are still playing out.

In any event, all but 17 miles (27 km) of his awarded contracts so far would replace existing barriers.

TRUMP: “We’ve done so much … with the biggest tax cut in history.”

THE FACTS: His tax cuts are nowhere close to the biggest in U.S. history.

It’s a $1.5 trillion tax cut over 10 years. As a share of the total economy, a tax cut of that size ranks 12th, according to the Committee for a Responsible Federal Budget. President Ronald Reagan’s 1981 cut is the biggest, followed by the 1945 rollback of taxes that financed World War II.

TRUMP: “Our air and water are the cleanest they’ve ever been by far.”

THE FACTS: Not true about air quality, which hasn’t gotten better under the Trump administration.

U.S. drinking water is among the best by one leading measure.

After decades of improvement, progress in air quality has stagnated. Over the last two years the U.S. had more polluted air days than just a few years earlier, federal data show.

There were 15% more days with unhealthy air in America both last year and the year before than there were on average from 2013 through 2016, the four years when America had its fewest number of those days since at least 1980.

The Obama administration, in fact, set records for the fewest air polluted days, in 2016.

On water, Yale University’s global Environmental Performance Index finds 10 countries tied for the cleanest drinking water, the U.S. among them. On environmental quality overall, the U.S. was 27th, behind a variety of European countries, Canada, Japan, Australia and more. Switzerland was No. 1.

TRUMP: “Almost 160 million people are working. That’s more than ever before.”

THE FACTS: Yes, but that’s not a feather in a president’s cap. More people are working primarily because there are more people. Population growth drives this phenomenon.

A more relevant measure is the proportion of Americans with jobs, and that is still below record highs.

According to Labor Department data, 60.6 percent of people in the United States 16 years and older were working in May. That’s below the all-time high of 64.7 percent in April 2000 during Bill Clinton’s administration, though higher than the 59.9 percent when Trump was inaugurated in January 2017.

TRUMP on his tariffs: “We are taking in billions and billions of dollars into our treasury. … We had never taken 10 cents from China.”

THE FACTS: Tariff money coming into the treasury is mainly from U.S. businesses and consumers, not from China. Tariffs are primarily if not entirely a tax paid domestically.

A study in March by economists from the Federal Reserve Bank of New York, Columbia University and Princeton University, before Trump raised tariffs even more, found that the public and U.S. companies were paying $3 billion a month in higher taxes from the trade dispute with China, suffering $1.4 billion a month in lost efficiency and absorbing the entire impact.

It’s also false that the U.S. never collected a dime in tariffs before he took action. Tariffs on goods from China are not remotely new. They are simply higher in some cases than they were before.

TRUMP: “We will always protect patients with pre-existing conditions. Always.”

THE FACTS: He’s not protecting current legal safeguards for patients with pre-existing medical conditions, which are part of “Obamacare.”

His administration instead is pressing in court for full repeal of Obama’s health care law, including other popular provisions such as coverage for young adults on their parents’ insurance, Medicaid expansion, health insurance subsidies and preventive care at no additional charge to the patient.

Trump and other Republicans say they’ll have a plan to preserve protections for people with pre-existing conditions, but the White House has provided no details.

Obama’s law requires insurers to take all applicants, regardless of medical history, and patients with health problems pay the same standard premiums as healthy ones. Bills supported in 2017 by Trump and congressional Republicans to repeal the law would have undermined those protections by pushing up costs for people with pre-existing conditions.

TRUMP: “Leading Democrats have even opposed measures to prevent the execution of children after birth.”

THE FACTS: Executing children is already a crime.

Trump is offering here a somewhat toned down version of a distorted story he’s been telling for months that falsely suggests Democrats are OK with murder.

His account arises from extremely rare instances when babies are born alive as a result of an attempted abortion. When these cases occur, “execution” is not an option.

When a baby is born with anomalies so severe that he or she would die soon after birth, a family may choose what’s known as palliative care or comfort care. This might involve allowing the baby to die naturally without medical intervention. Providing comfort without life-extending treatment is not specific to newborns. It may happen with fatally ill patients of any age.

TRUMP: “We passed VA Choice. …They’ve been trying to get that passed also for about 44 years.”

THE FACTS: No, Congress approved the private-sector Veterans Choice health program in 2014 and Obama signed it into law. Trump signed an expansion of it.