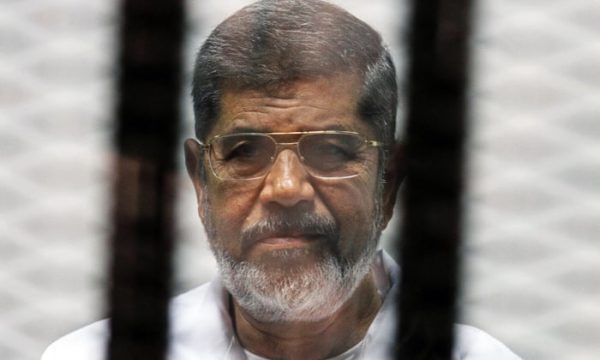 Ousted Egyptian President Mohamed Morsy, who was the country’s first democratically elected leader, has died, according to Egyptian state media.

Morsy, 67, had been on trial for an espionage case when he suffered a heart attack, Egypt’s state-run Al Ahram online reported.
He had been granted a request to make a statement before he fainted and passed away, state media said. The former president has been taken to an unnamed hospital, it added.

A strict Islamist who was educated in southern California, Morsy was voted into power in June 2012 following the 2011 Arab Spring uprising the year prior, which toppled Hosni Mubarak’s longstanding rule.
A former member of the Muslim Brotherhood, Morsy had campaigned on appealing to the broadest possible audience.
But, during his year in power, critics say he became an authoritarian leader who forced through a conservative agenda.
In 2013, Morsy and the political wing of the Muslim Brotherhood movement were ousted in a coup, with the Muslim Brotherhood banned by the government after the military seized power and declared it a terrorist organization.
Roughly 1,000 Egyptians — many of them Morsy supporters — were killed during protests against the military government.
Following his ouster, Morsy was tried en masse with Mohamed Badie — the spiritual leader of the Muslim Brotherhood — as well as more than 100 alleged members of the outlawed group, according to state media.
In 2015, he was sentenced to death over a jailbreak during the 2011 uprising and to life on espionage charges after being convicted of conspiring with Palestinian group Hamas, the Iranian Revolutionary Guard and other foreign organizations.
Both of those sentences were widely criticized as political grandstanding.
Morsy was also handed a 25-year prison sentence for leaking state secrets to Qatar, and had received an additional 15-year sentence for other, lesser, charges.
In 2016, Morsy’s death sentence and life sentence were overturned.
Last year, in a report from a panel commissioned by Morsy’s family and made up of British Parliamentarians said that the conditions of his detention “would constitute cruel, inhuman and degrading treatment,” and “could meet the threshold for torture in accordance (with) Egyptian and International law.” The panel wrote that Morsy is receiving inadequate medical care “which is likely to lead to premature death.”