After monkeying around in Israel  ‘Tachtouch’ returns to Lebanon via UN 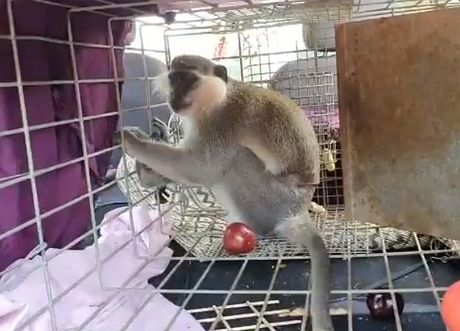 A Lebanese monkey that breached the border with Israel was returned to its owner Friday by United Nations peacekeepers after cavorting for more than a week in enemy territory.

Its owner, a French nun who describes herself as a “virgin hermit”, was quick to see the primate’s escapade across one of the world’s most tense borders as a message of peace.

“Please Tachtouch come back to Ark of Peace!” she wrote on June 1, with a promise that the village children would hand out bananas as a reward.

But Tachtouch was far away, having slipped across the militarized frontier into Israel.The return voyage across the fortified border had to be undertaken with help from the U.N.’s peacekeeping force UNIFIL.

The head of  Rafic Hariri International Airport Fadi Hassan, denied that  the US military that landed today at the airport, has taken off from Airport “Tel Aviv”. He told the”national news agency” the plane  got a landing permission on the bases that it took off   from Kuwait City passing above Saudi Arabia and a Cypriot, then landed at the airport in Hamat and after at the airport of Rafic Hariri”.