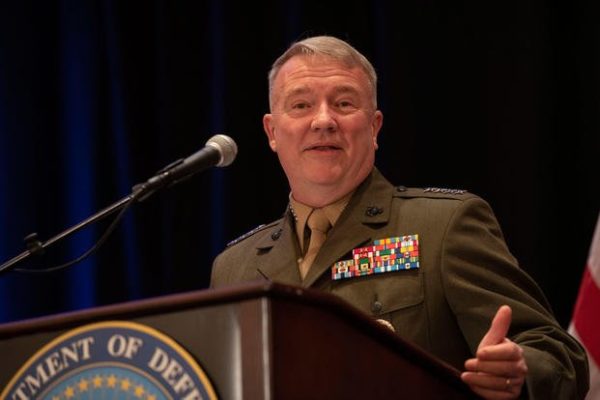 The top commander of U.S. forces in the Middle East says he believes the Iranians or their proxies may orchestrate an attack at any moment.

“I think the threat is imminent,” Marine Gen. Frank McKenzie said in an exclusive broadcast interview with NBC News in the Iraqi capital. “We continually evaluate our force posture in the region.”

The U.S. has beefed up its military presence in the region in an effort to deter Iran and protect American forces and allies.

Over the last month, the Trump administration announced that it was sending an aircraft carrier strike group and Air Force bombersto the Middle East, as well as Patriot missiles and additional troops, amid heightened concerns of an Iranian attack.

McKenzie said he was “heartened” by the efforts of the Iraqi government to protect American forces and its allies in the region. Roadside bombs have posed the major danger to American forces in Iraq, McKenzie added, but he said the threat from the Iranians is evolving.

“They probe for weakness all the times,” McKenzie said. “I would say the threat has probably evolved in certain ways even as our defensive posture has changed and become more aggressive, and we certainly thank our Iraqi partners for many of the things they’ve done.”

“I think we’re still in the period of what I would call tactical warning,” he said. “The threat is very real. “

McKenzie declined to go into specifics on the nature of the threats.

A day after the U.S. announced it was sending additional military assets to the region to “send a clear and unmistakable message” to Iran, four oil tankers were attacked in the Persian Gulf. The U.S. suspects Iran was responsible for the attacks; the Iranian government has denied having any role in the incident.

Last month, U.S. officials said that the decision to beef up military forces in the region was based in part on intelligence that the Iranian regime has told some of its proxy forces that they can now target American military personnel and assets.

The intelligence shows that an Iranian official discussed activating Iranian-backed groups to target Americans, but did not mention targeting the militaries of other nations, the officials said.

Among the specific threats the U.S. military is now tracking, officials say, are possible missile attacks by Iranian dhows, or small ships, in the Persian Gulf and region; attacks in Iraq by Iranian-trained Shiite militia groups; and attacks against U.S. ships and against Saudi Arabia by the Houthi rebels in Yemen.

The U.S. has accused Iran of moving missiles and missile components through the region’s waterways for years, shipping missiles to the Houthis in Yemen and others. And Shiite militia groups like Baghdad Katib Hezbollah (BKH) have been in Iraq for years, acting essentially as sleeper cells.

But the call to awaken and activate the existing threats represented a new and alarming escalation, the U.S. officials said.

Some U.S. allies and members of Congress have expressed skepticism over the Trump administration’s claims that Iran is responsible for the escalating tensions. The Iranians have also criticized the U.S. posture.