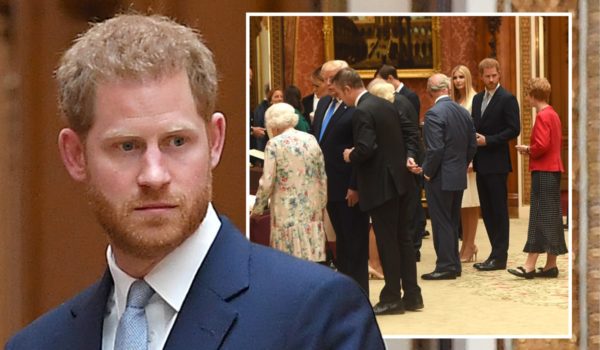 Several outlets have implied Prince Harry avoided President Donald Trump during Monday’s royal events. Some reporters took note of the fact the Duke of Sussex did not attend Trump’s state banquet Monday evening, while others honed in on a handful of photos from an earlier event.

Royal watchers have been scrutinizing Harry’s every move since news emerged that Trump had called Harry’s wife, Meghan, Duchess of Sussex, “nasty” in an interview with British tabloid, The Sun. Trump then denied he used the word, even though it was recorded.

Much has been made of a handful of photos that show Harry standing several feet from Trump during a tour of the Royal Collection. The tour took place after a private lunch attended by Donald Trump, Prince Harry and other members of their families.

Images shared by The Sun and other outlets show Prince Harry standing several feet away from the president, chatting with Ivanka Trump and an unnamed woman.

A separate photo shows Harry speaking with the Earl Peel, Lord Chamberlain of the Royal Household.

Royal writer Emily Andrews shared more photos of the interactions on Twitter, with the comment: “Prince Harry, who was also at the private lunch, noticeably hung back. He walked in with Ivanka (was he supposed to show her round the exhibition?? or maybe they sat next to each other at lunch) and then drifted off to talk to the Lord Chamberlain (the Earl Peel).”

Commentator Ingrid Seward blasted the prince’s allegedly poor manners, per The Sun. “He appears to be behaving in a rather immature way and letting his personal animosity take over from his natural good manners,” she said.

“Whatever his personal feelings, it’s his duty to support the Queen regardless and take a tip from his grandmother who has never allowed her personal feelings to interfere with her duty,” she continued. “It’s bad manners and rude.”

But, from the photo evidence at least, it’s impossible to tell if Harry was deliberately avoiding the president Monday. Reporters were not allowed in the private lunch held before the tour, so it’s not known if the pair interacted.

As for Harry’s failure to attend the state banquet, a spokesperson for Buckingham Palace maintained that royal family members covered the day’s events as a team. “[Prince Harry] attended the lunch during the day and the Duke of Cambridge and the Duchess of Cambridge attended the evening event,” royal spokesperson Colette Saunders told Newsweek. “Members of the royal family cover all the events and Prince Harry attended the lunch and other members of the family attended in the evening.”