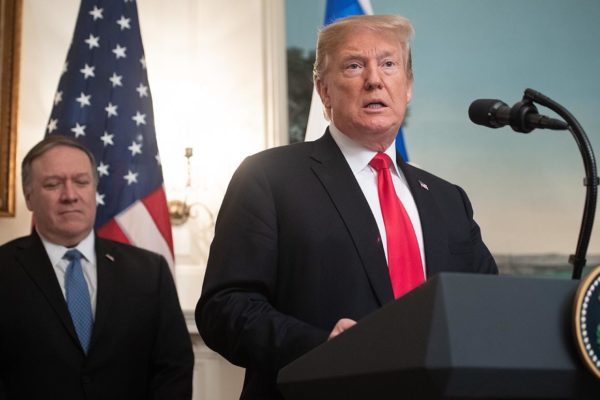 President Donald Trump said Secretary of State Mike Pompeo “may be right” in his raw assessment of the administration’s Middle East peace plan.

Speaking to reporters Sunday, Trump responded to a Washington Post report that Pompeo had described the administration’s plan for lasting peace between Israel and the Palestinians arguably “unexecutable.” Pompeo also said that the plan — which is being devised by Trump’s son-in-law, Jared Kushner, and former Trump lawyer Jason Greenblatt — “may be rejected” and that critics would call it “not particularly original,” the Post reported based on a recording of Pompeo’s comments.

Trump, who previously called the plan the “deal of the century,” conceded that “he may be right.”

“We’ll see what happens,” Trump told reporters before leaving for a state visit to the United Kingdom. “We’re doing our best to help the Middle East.”

Pompeo made his remarks during an off-the-record Tuesday meeting of the Conference of Presidents of Major American Jewish Organizations. According to the Post, Pompeo demonstrated a drastic change in tone when talking about the deal, admitting that it “has taken us longer to roll out our plan than I had originally thought it might — to put it lightly,” and that there are “no guarantees that we’re the ones that unlock it.”

Still, Trump did not completely dismiss his son-in-law’s work Sunday.

“If we can get a Mideast peace plan that would be good,” Trump said. “And when Mike says that, I understand when he says that, because most people think it can’t be done. I think it probably can. But as I say often, we’ll see what happens.”

Kushner and Greenblatt have been working on a peace deal in the Middle East for two years, keeping the details under cover as they try to broker an end to one of the most contentious conflicts in contemporary history. Throughout their efforts, the Trump administration has repeatedly acted in ways antagonistic toward Palestinians, including moving the U.S. Embassy from Tel Aviv to Jerusalem, recognizing Israeli sovereignty over the Golan Heights (which had been Syrian territory until 1967) and constantly backing Prime Minister Benjamin Netanyahu.

Netanyahu has additional problems of his own: Last week, it became clear he would not be able to form a coalition government. In the absence of a ruling coalition, new elections were called for September.

CNN reported that the economic portion of the plan will focus on bringing investment to the Palestinian territories and is likely to be revealed this summer. Kushner is visiting the Middle East to raise support for a peace conference in Bahrain later this month.