God sent Trump to unite us, bolstered the demand for right to return: Palestinian refugee 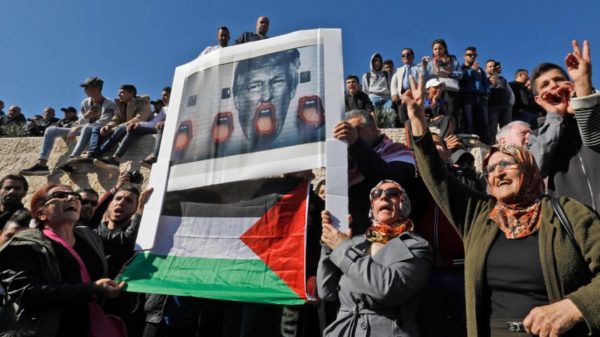 Palestinian protesters hold a poster bearing an image of Trump and the Palestinian flag during a demonstration at Damascus Gate in the Jerusalem’s Old City on December 8, 2017. To the Palestinians Trump is the enemy
Share:

In the short distance beyond Lebanon’s southern border, 76-year-old Fahida Hajj says she can just make out the village where she grew up—a patch of land in a place that, for Hajj, has no other name but “Palestine.”

“I see my village and I start crying,” Hajj told Newsweek, speaking in Arabic. “We had a lot of land with lots of vegetables, apples, peaches, grapes… everything. All I want is to go back.”

Just over 70 years ago, Hajj became one of the hundreds of thousands of Palestinian Arabs forced to flee their homes to escape the 1948 Arab-Israeli War.

Hajj was just six years old when her family fled to Lebanon, where she eventually raised four children of her own in Beirut’s overcrowded Bourj el-Barajneh refugee camp. Yet, in the 71 years that have passed since Hajj fled her village, her determination to return to her homeland has never wavered.

In fact, over the past year-and-a-half, she and many other Palestinians living in Bourj el-Barajneh say their demand to return to the land they were forced to leave behind has only grown, fuelled by a fresh wave of fury.

And at the center of much of that fury? President Donald Trump.

‘He Has Oppressed Us’

“Trump is a tyrannical leader and an oppressive person and he has oppressed us,” she said. “If I had the capacity to kill him, I would.”

For Palestinian refugees everywhere, Trump has come to the fore as a primary foe. Since taking office, the U.S. leader has steered America’s role as the primary mediator between Palestinians and Israelis far off-course, unequivocally throwing his support behind Israel and Prime Minister Benjamin Netanyahu, who presides over the most right-wing government the country has ever seen.

For Palestinians, Trump’s presidency has brought one blow after another. His decision to move the U.S. embassy from Tel Aviv to Jerusalem — the holy city that both Israelis and Palestinians have laid claim to — sparked deadly protests in the Gaza Strip. Israel has long since named the city as the country’s capital, while Palestinians view it as the capital of a future independent state.

Despite more than 100 protesters being killed in the demonstrations that followed in the wake of Trump’s decision to relocate the embassy, Palestinians were left further outraged when U.S. representatives appeared to blame them and more specifically, Islamist militant group Hamas, which controlled the Gaza Strip, for the blood spilled.

Meanwhile, displaced Palestinian refugees living around the world were left reeling after the president’s decision to pull all U.S. funding for the United Nations Relief and Works Agency (UNRWA) — the U.N.’s main program supporting Palestinian refugees — throwing the future of millions of people into peril and bringing America’s role as the largest individual donor to UNRWA to an abrupt end.

At the time, the U.S. State Department said the country was no longer willing to “shoulder the very disproportionate share of the burden” for keeping UNRWA going and would not “commit further funding to this irredeemably flawed operation.”

In Lebanon, initial news of the Trump administration’s decision to cut the funding sparked widespread fears for the future, particularly given that many Palestinian refugees — as well as their descendents — have never been naturalized and without Lebanese identity cards, are barred from entering most occupations, forcing them to rely upon UNRWA’s services.

UNRWA Commissioner General Pierre Krähenbühl told Newsweek that while in Lebanon, the cuts resulted in a hiring freeze and “some targeted adjustments in terms of assistance provided in camps,” overall, “the vast majority of services were kept intact.”

However, he said that with UNRWA already struggling each year to provide the host of services it offers to Palestinian refugees — including education, healthcare and social services — the impact in Beirut has left refugees feeling more hopeless than ever.

“I think the strongest impact has been in adding further sense of despair to people’s lives who didn’t need anything to be added in those terms,” Krähenbühl said.

Following the Oslo Accords, which were meant to lay the groundwork to bring the Israeli-Palestinian conflict to an end, Palestinian refugees, he said, “were told that if they believed in these political processes, if they believed in mediation, a solution would be found that would bring an end to their plight.”

“Right now, all of that seems extremely remote at best,” said Krähenbühl. “And all the pressures that come with that, the indignities, the lack of hope… Of course, when you have something that adds to that like this, it is extremely painful.”

‘God Will Avenge Us’

For the Hajj family, the past year has been particularly painful. One of Fahida’s daughters passed away at the age of 42 after her family was unable to afford the follow-up treatment she needed to get better after undergoing heart surgery.
Wafaa said she believes her sister’s death might have been prevented if UNRWA was better-funded and if the Trump administration hadn’t pulled millions of dollars of funding from the agency.

“My sister needed follow-up treatment, but they could not afford it, so she had to die,” Wafaa said. “If we had that treatment, she could have lived.”

Wafaa wipes away tears, which see says are born of anger as they are of sadness.

“Trump is a tyrannical leader and an oppressive person and he has oppressed us,” she said.

However, Wafaa said she believes that the U.S. leader’s actions have only fuelled the flames of younger generations determined to fight for the land of their ancestors.

“Although I hate him,” Wafaa said, “I think maybe God has sent Trump to unite us and to motivate us.”

“Because Trump is stupid, God has let him be stupid and make these decisions,” she said. “Every time the Palestinian cause has calmed down, God has created something to start it again.”

“They think those who are older will die and that the new generation will forget about Palestine. But, the younger generation is remembering more and more. Much more than before,” she said. “The more they put pressure on us and say this is not our land, the more enthusiastic we become to get our land back.”

‘Trump Is Our Enemy’

Across the camp, that sentiment is shared by 21-year-old Wassim Atout, a Palestinian refugee born in Beirut who works at his uncle’s cafe in Bourj el-Barajneh.

“UNRWA is supposed to be in charge of the camps, but they are doing nothing anymore for Palestinians,” he said. “There are no jobs. If someone wants to get married, they cannot even afford to do that. People here are struggling just to find something to eat.”

“So, to me personally, I feel that Trump is a thief,” said Atout, who lives at the camp with his four siblings and parents.

“Trump is our enemy and as an enemy, he’s squeezing us financially, depriving us from the minimum,” he said. “They took our land, our land was taken now he cuts off financial aid.”

“He’s grabbing, step-by-step, the rights of Palestinian people and pushing us to the corner to destroy us, to eventually end us.” Atout said, adding that Trump “can harm us, but he cannot finish us.”

“The right of return is the most important thing. I am a Palestinian, though I was born in Lebanon. My identity is Palestinian and the right of return is my utmost right,” the 21-year-old said.
That belief in the right to return to the property Palestinians were forced to leave behind is one shared by both first-generation refugees, as well as their descendents. Israel does not recognize this as a right, however, under the argument that it would tilt the country’s demographic balance and make Israeli Jews a minority.
If given the chance to fight for that right, Atout said, “Of course I would go. It’s not just me, it’s many people. Everybody feels that way.”

However, Atout said he would prefer to return to his ancestors’ land in peace. If he could ask one thing of world leaders it would be to “have mercy” on Palestinians.

The same goes for Trump: “If I could, I would tell him one word—mercy. Have mercy.”

Few Palestinian have any hope that mercy might come in the form of the new peace plan that Trump has tasked his senior adviser and son-in-law Jared Kushner and White House Middle East envoy Jason Greenblatt.

The White House has remained tight-lipped on when exactly the new proposal might be released. However, Kushner has previously suggested that the government will “start unveiling” the plan after Ramadan, which ends June 4.

On Friday, Riyad al-Maliki, foreign minister of the Palestinian National Authority, said he expected the Trump administration’s peace plan to provide little more than a “stamp of approval to Israel’s colonial policies.”

Israel’s control of Palestinian territories, al-Maliki said, is already working to “ensure confinement and expansion of Israeli settlers with the objective of maximum land with minimum Palestinians.”

Now, he said he believes that the region is in “the final stages of this masterplan that Israel is no longer even trying to hide, and which can only be described as colonialism under the disguise of occupation.”

And as that masterplan unfolds, al-Maliki said, the Trump administration “has shown nothing but disregard for Palestinian rights and Palestinian lives.”

‘Nothing Is Worse Than Where We Are’

At Shatila, another refugee camp set up for Palestinians in Beirut just a few miles north of Bourj el-Barajneh, Palestinian refugees share in that hopelessness.

Living at an overcrowded camp still scarred by the legacy of having been at the center of one of the region’s worst atrocities of the last century, which saw thousands of Palestinians and Shia Lebanese people living at the camp killed by Christian paramiltaries allied with Israel in 1982, some refugees at Shatila say they have lost any hope of seeing their “right of return” honored.

Amal Alakar, a 53-year-old mother of seven children—one of whom was lost to drugs while a second passed away from complications following an injury—said conditions at the camp, where dangerous electrical wires hang low in tangled webs and streets are strewn with litter, have only gotten worse over the past year.

“Nothing is worse than where we are,” said Alakar, who still struggles to afford care for injuries she sustained during fighting in the eighties, which saw her lose one of her eyes and suffer gunshot wounds to her legs. Gently removing the glass eye she has had to use since, Alakar said she cannot afford to replace it, which patients are told to do every five years.

At Shatila, many families struggle to access adequate medical care, she said, while issues like drug abuse and street violence are also widespread across the camp. Meanwhile, she and others living at both Shatila and Bourj el-Barajneh camps said dozens of people have died or seen their homes burnt down due to the wires that hang from above.

One of Alakar’s son’s homes was devastated by such a fire, which his wife and three young children were just barely able to escape.

While UNRWA has maintained that its services in Lebanon have been largely unaffected by the Trump administration’s funding cuts, Alakar said that at Shatila, “there was a big cut” felt by those living there. The U.S., she said, has “done everything to make people miserable at the camps.”

While for some, that misery has only further fanned the flames of a growing will to fight for what many Palestinians view as their most important right, Alakar said she has lost any hope of ever seeing a future “Palestine.”