Insurance risks up in the Gulf after Iran linked attacks 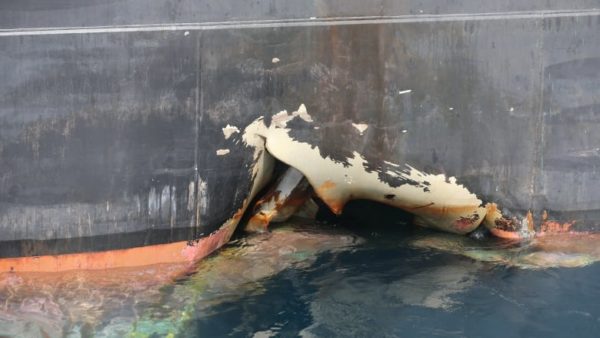 A damaged oil tanker, the Andrea Victory, is seen off the Port of Fujairah, United Arab Emirates on Monday. (Satish Kumar Subramani/Reuters)
Share:

The Joint War Committee, which includes representatives of Lloyd’s of London and the International Underwriters Association of London, said waters off Oman, UAE and the Persian Gulf had been added to a list of areas of “perceived enhanced risks” as they could not rule out further attacks.

The move may increase insurance premiums for oil tankers and other vessels operating near the Strait of Hormuz and the surrounding areas, a key oil choke point that has come under the spotlight as tensions between Saudi Arabia, the US and Iran have intensified.

A number of vessels off the UAE port of Fujairah were damaged last weekend in what the country said was “sabotage” attacks, while two Saudi Arabian pumping stations on a key pipeline were damaged in a drone attack this week.

“The effect is that underwriters will now be requiring assureds to notify them if they have vessels either trading in or entering the region,” said Neil Roberts, Head of Marine Underwriting at Lloyd’s Market Association.

“This will allow insurers to assess the circumstances of each vessel and adjust terms and conditions accordingly. That does not automatically mean that every ship will be charged an additional premium — that is a decision for the individual underwriter having assessed the specifics of the voyage in negotiation with the broker.”

Mr Roberts said the decision was “necessary” in the “absence of clarity over the likelihood of further attacks” and that the “situation will be kept under close review”.

The attack “proves that these militias are merely a tool that Iran’s regime uses to implement its expansionist agenda,” tweeted Prince Khalid bin Salman, a son of King Salman.