UN Secretary-General Antonio Guterres called on the Lebanese government to prevent Hezbollah and other groups from owning weapons in a report issued by the UN on Friday. Guterres strongly criticized Hezbollah for operating as the most heavily armed militia and a political party in Lebanon and urged the militant group to halt military activities inside and outside the country, including in Syria. 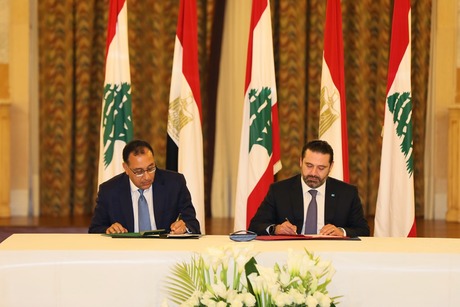 The Lebanese-Egyptian Joint Higher Committee held a meeting Friday evening at the Grand Serail, chaired by Prime Minister Saad Hariri and his visiting Egyptian counterpart Mostafa Madbouly. After the meeting,  Hariri and Madbouly signed three memoranda of understanding  that deal with the exchange of tax experiences, the export of Egyptian building materials (gravel and sand) to Lebanon, and the field of communication and information technology.

“We need to increase economic relations between the two countries by enabling the private sector to expand joint projects. There are areas of investment in both countries, and we encourage the establishment of joint companies that can invest in Egypt, Lebanon and other markets like Africa or elsewhere, especially that there are several advantages that characterize the private sector,” Egyptian PM Madbouly  was quoted as saying