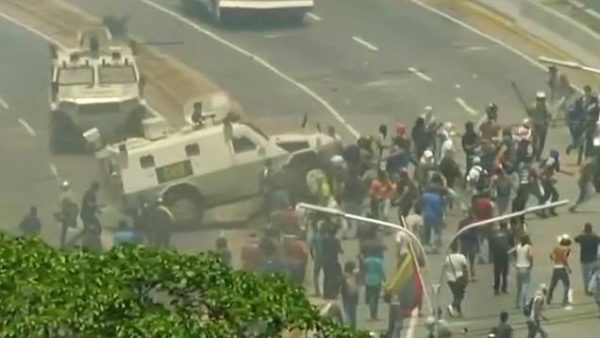 military vehicle crashing into a crowd of protesters in Caracas, Venezuela
Share:

In a video broadcast live on telecasts across the world, the armored vehicle can be seen driving over the center of a road, hitting a crowd of demonstrators purportedly throwing rocks at security forces. No injuries were immediately reported.

Sen. Marco Rubio, R-FL., denounced the actions by Venezuelan security forces, saying that “military and security leaders must realize they are and will be held responsible for this,” he said on Twitter.

“The armed forces have taken the right decision,” Guaido said earlier Tuesday. “With the support of the Venezuelan people and the backing of our constitution, they are on the right side of history.”

He added: “The moment is now.”

The 35-year-old leader of the opposition-led National Assembly and a small contingent of heavily armed soldiers appeared in an early morning video promoting the “final phase” of his putsch to oust Maduro.

The United States, which has supported Guaido’s claim as interim president of Venezuela, offered its support of the opposition and its supporters.

“To Juan Guaido, the National Assembly and all the freedom-loving people of Venezuela who are taking to the streets today in #operacionlibertad—Estamos con ustedes! We are with you! America will stand with you until freedom & democracy are restored. Vayan con dios!” Vice President Mike Pence wrote on Twitter.

White House press secretary Sarah Sanders said that President Trump had been briefed on the ongoing situation in Venezuela and they were monitoring.

Meanwhile, Secretary of State Mike Pompeo said that the U.S. fully supports the “Venezuelan people in their quest for freedom and democracy.”

“Democracy cannot be defeated,” he added.

Troops loyal to Maduro sporadically fired tear gas from inside the adjacent Carlota air base. A crowd that quickly swelled to a few thousand scurried for cover, with a smaller group of masked youths reassembling outside the air base’s gates where they lobbed rocks and other heavy objects.

“It’s now or never,” said one of the young rebellious soldiers, his face covered in the blue bandanna worn by the few dozen soldiers who stood alongside Guaidó and Lopez.

Maduro tried to project an image of strength, saying he had spoken to several regional military commanders who reaffirmed their loyalty to his socialist revolution.

“Nerves of steel!,” he said in a message posted on Twitter.

Defense Minister Vladimir Padrino rejected what he called an attempt by a “subversive movement” to generate “panic and terror.” He later said that the “acts of violence” by some members of the armed forces had been “partly defeated” and that the military’s top ranks remained “loyal to the constitution.”

He was flanked by other security forces as he described Tuesday’s rebellion as small and insignificant. He said that the armed forces reject “this new aggression” by the U.S.-backed opposition.

“A mediocre coup d’etat attempt has failed,” he said.

Anti-Maduro protests are planned for Wednesday, including what Guaido has said will be “the largest march in Venezuela’s history,” part of what he calls the “definitive phase” of his effort to take office in order to call fresh elections.

Meanwhile, socialist party chief Diosdado Cabello said most of Caracas was calm and called on government supporters to amass at the presidential palace to defend Maduro.

“We’re going to Miraflores palace to defend the revolution, to defend Nicolas and to defend the legacy of Hugo Chavez,” Cabello said in a phone call to state TV.

About a dozen government supporters, some of them brandishing firearms, gathered at the presidential palace, answering the call by Cabello to defend Maduro.

“It’s time to defend the revolution with arms,” Valentin Santana, head of a militant group, said in a video posted on social media as he brandished an automatic rifle.

Meanwhile, Guaidó said the troops who had taken to the streets were protecting Venezuela’s constitution. He said that in the coming hours he would release a list of top commanders supporting the uprising.

“The armed forces have taken the right decision,” said Guaidó. “With the support of the Venezuelan people and the backing of our constitution, they are on the right side of history.”

As the events unfolded in Caracas, governments from around the world expressed a mix of support for Guaido, while reiterating calls to voice violent confrontation.

“Venezuelans have made clear that the current path toward democracy is irreversible,” he said on Twitter.

However, the spokeswoman’s for Spain’s acting government said it did not support any military coup in Venezuela, even though it still considered Guaido the country’s legitimate leader.

“We hope with all of our strength that there is no bloodshed. We support a peaceful democratic process in Venezuela. We support the immediate holding of an election for a new president,” Isabel Celaá said on Tuesday during a weekly routine press briefing.

President Vladimir Putin is said to be paying “significant” attention to the reports about “a coup attempt in that country,” Kremlin spokesman Dmitry Peskov was quoted as saying by Russian news agencies.

Elsewhere, Bolivian President Evo Morales issued a call via Twitter Tuesday urging Latin American governments “to condemn the coup d’etat in Venezuela and keep the violence from claiming innocent lives.” He blamed the U.S. for “provoking violence and death in Venezuela.”

Cuban Foreign Minister Bruno Rodríguez also sent a tweet backing Maduro and calling on the U.S. to “halt aggressions against the peace.”

Guaido, the leader of Venezuela’s opposition-controlled National Assembly, invoked the constitution to assume an interim presidency in January, triggering a power struggle with Maduro. He has the support from about 50 countries, including the United States and several European nations, who have disavowed Maduro’s presidency.

Meanwhile, Maduro, who is backed by Russia and China, calls Guaido a U.S.-backed puppet who seeks to oust him in a coup. He has appeared to retain control of state institutions and the loyalty of senior military officers.

The Venezuelan government has arrested Guaido’s top aide, stripped the opposition leader of his parliamentary immunity and opened multiple probes against him. He has also barred him from leaving the country – a ban that Guaido openly violated earlier this year when he traveled to several Latin American countries seeking foreign support.

Home to the world’s largest oil reserves, Venezuela was for decades an economic leader in the western hemisphere and, despite a massive gap between rich and poor, was a major destination for neighboring Colombians and other Latin Americans fleeing their less prosperous and more troubled homelands.

But in 1999 with the rise to power of late leader Hugo Chávez – whose social and economic reforms initially endeared him to the poor but also set up an unsustainable system of state spending – Venezuela’s economy began to creep toward a crisis.