The 10 African strongmen who left power since 2011 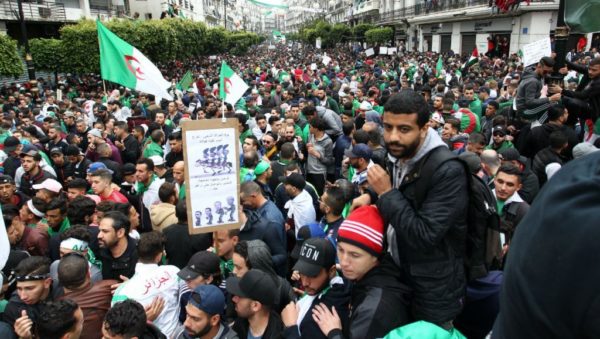 Algerians take to the streets in an anti-government protest in Algiers on April 19, 2019. AFP
Share:
Text by:Hermann BOKO

Africa has a long history of strongmen who have spent decades in power. But since the 2011 Arab Spring, no less than 10 of them have been toppled, with two – Algeria’s Abdelaziz Bouteflika and Sudan’s Omar al-Bashir – forced out in April.

Tunisia was the first country to topple its longtime autocratic leader,Zine el-Abidine Ben Ali, after the self-immolation of a 26-year-old fruit vendor sparked an uprising that would soon spread to other countries in the region and become known as the Arab Spring. Mohamed Bouazizi, who set himself on fire in the city of Sidi Bouzid on December 17, 2010, after police confiscated his fruit cart for not having a permit, became the symbol of Tunisia’s impoverished, bringing thousands of people into the streets to protest against social injustice, poverty, corruption and ultimately, Ben Ali’s rule.

After four weeks of protests and authorities responding with brutal crackdowns, the Tunisian leader was deposed on January 14, 2011, and forced to seek exile in Saudi Arabia after 24 years in power.

Egyptian strongman Hosni Mubarak was the second leader to be forced from his presidential palace as the Arab Spring began to gain traction. The first protests erupted on January 25, 2011, and would lead to more than two weeks of strikes and demonstrations. Cairo’s Tahrir Square quickly became the focal point for Egyptians protesting the oppression, corruption and injustice suffered under Mubarak’s 30-year, iron-fist rule.

Hundreds of people were killed as authorities tried to stop the demonstrations andevict demonstrators from Tahrir Square. The army finally stepped in and urged Mubarak to step down. On February 11, 2011, Vice President Omar Souleiman announced Mubarak’s resignation to the thousands of people gathered on Tahrir Square.

October 2011: The end of Muammar Gaddafi’s regime in Libya

Muammar Gaddafi was once the longest–reigning dictator in both the Arab world and Africa after having spent 42 years in power. Protests broke out on February 15, 2011, following the arrest of prominent human rights activist Fethi Tarbel. Fuelled by the winds of the Arab Spring, the demonstrations soon morphed into nationwide protests against Gaddafi’s rule, spreading from Benghazi to Tripoli with demonstrators calling for democracy and a fairer distribution of the oil-rich country’s resources.

Authorities responded with deadly crackdowns, and an armed conflict erupted between Gaddafi-loyal forces and opposition groups, which united to form the National Transition Council. The council was quickly recognised by the international community and backed by a military coalition made up of France, Britain, Canada and Italy. On August 23, the council announced it had taken control of Tripoli, and on October 20, Gaddafi was killed in the northern city of Sirte, his regime’s last bastion.

Blaise Compaoré came to power after staging a 1987 coup against his former friend and ally Thomas Sankara.He was elected Burkina Faso’s president in 1991 and reelected in 1998. After embarking on his second mandate, parliament approved changes to the country’s constitution, limiting the number of presidential mandates to two, and shortening the mandate period to five years instead of seven. In 2005, the constitutional council ruled that these changes could not be taken into account retroactively, thereby allowing Compaoré to run for reelection in both 2005 and 2010.

In 2014, Compaoré’s ruling party proposed additional changes to the constitution to allow him to seek a fifth mandate. On October 29, as the National Assembly prepared to debate the controversial amendment, opponents stormed the parliamentary building in Ouagadougou and violent protests broke out in cities across the country.

Although Compaoré tried to appease the protesters by ditching the proposed changes and dissolving the government, he was unable to calm the wrath of the angry crowds. On October 31, Compaoré fled to Ivory Coast with the help of France after a 27-year-long reign.

After 22 years as the president of Gambia, Yahya Jammeh finally saw himself defeated at the polls after running for a fifth consecutive mandate.

Although Jammeh initially conceded defeat to his opponent, Adama Barrow, he then demanded a recount as calls began to mount for him to be prosecuted for alleged abuses. The Economic Community of West African States (ECOWAS) and the African Union responded by calling for the 2016 vote to be respected.

On January 18, when Jammeh’s mandate officially expired, he announced his intention to stay on as Gambia’s leader. The following day Barrow, who had sought refuge in Senegal, was inaugurated as Gambia’s rightful president at a ceremony held at the country’s embassy in Dakar. On January 21 Jammeh was forced into exile after losing the support of the army.

José Eduardo Dos Santos remained at the helm of Angola for 38 years before he decided to hand over the reins at the age of 75.

Dos Santos was a key figure in the People’s Movement for the Liberation of Angola (MPLA) and was elected the country’s second-ever president in 1979 – four years after Angola declared independence from Portugal and following the death of his predecessor, Agostinho Neto, in Moscow.

During his first 20 years in power, dos Santos ruled Angola with an iron fist as the government fought a civil war with a rival liberation group, UNITA, which refused to recognise the legitimacy of dos Santos and his government. Peace was declared in 2002 – 26 years after the civil war began.

After winning reelection in both 2008 and 2012, dos Santos came under increased fire for his authoritarian rule. In 2016 he announced he would retire, presenting Defence Minister Joao Lourenço as his chosen successor. In September 2017, Lourenço became Angola’s third president.

Robert Mugabe was Africa’s oldest serving leader when he announced on November 4, 2017, that he intended to hand power to his wife Grace Mugabe, 40 years his junior. After announcing the sacking of Vice President Emmerson Mnangagwa – the ZANU-FP party’s choice to replace Mugabe – the army intervened and seized power, placing both Mugabe and his wife under house arrest.

On November 21, 2017, parliament launched an impeachment process to remove Mugabe, who responded by resigning after 30 years as president.

December 2018: Kabila steps down in the Democratic Republic of Congo

Joseph Kabila was only 29 years old when he took office in 2001, just 10 days after the assassination of his father, President Laurent-Désiré Kabila. In 2003 he set up a transitional government after negotiating a peace agreement that put an end to the 1998-2003 Second Congo War. In 2006, Kabila was democratically elected president for the first time. In 2011 he was reeleacted for a second, and final, term.

In 2016, as Kabila’s mandate was coming to an end, he announced that the upcoming elections would be postponed, citing the long and costly process of registering the country’s 40 million voters. After coming under increasing international pressure to announce a new date for the vote, the elections were finally held in December 2018. Félix Tshisekedi won the election, with Kabila’s chosen candidate, former interior minister Emmanuel Ramazani Shadary, finishing a distant third behind Martin Fayulu.

Old and in ill health, Algeria’s 82-year-old leader Abdelaziz Bouteflika refused to leave his seat until massive street protests finally drove him out of the presidential palace in April 2019.

Bouteflika’s downfall began on February 10 when the ailing president, who suffered a debilitating a stroke in 2013, announced that he intended to run for a fifth term. The news triggered unprecedented street protests in Algeria, with many viewing Bouteflika as a puppet of the ruling National Liberation Front party (NLF).

After weeks of sustained protests and several defections from both the NLF and the army – including powerful army chief General Ahmed Gaid Salah – Bouteflika announced his resignation on April 2.

Omar al-Bashir ruled Sudan for 30 years before mass protests – initially triggered by higher bread prices – led to his removal through a coup d’état staged by the army.

When South Sudan declared independence in 2011, also claiming the region’s precious oil reserves, Sudan was plunged into a deep economic crisis, with both fuel and food prices rising sharply. At the end of December 2018, a nearly three-fold rise in the price of bread sparked massive street protests.

Unable to quell the demonstrations – which quickly turned into a broader, anti-government movement – Bashir ordered Sudan’s first state of emergency in two decades in February. On April 11, the Sudanese military removed Bashir from his post, dissolving both the cabinet and the National Legislature as it announced a two-year transition period under military rule. Since then protesters have kept up the pressure, calling for more sweeping changes, while Bashir has been imprisoned.