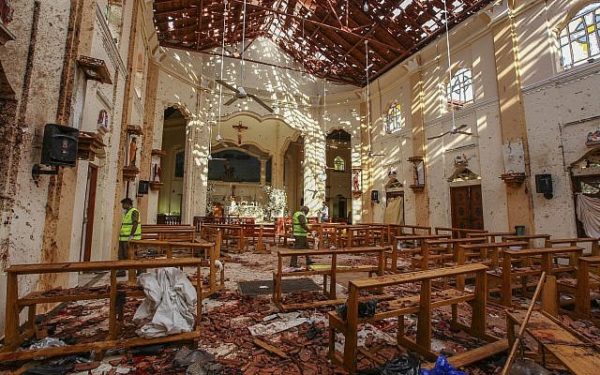 A view of St. Sebastian’s Church damaged in blast in Negombo, north of Colombo, Sri Lanka, April 21, 2019 hit by one of eight blasts that rocked churches and hotels in and just outside of Sri Lanka’s capital on Easter Sunday. (AP/Chamila
Share:

The Islamic State group claimed responsibility for a wave of coordinated bombings at churches and high-end hotels across Sri Lanka.

The terrorist organization provided no evidence to support the claim, which was announced in a statement in Arabic published by its Amaq news agency on Tuesday, saying the attackers were “among the fighters of the Islamic State,” according to a translation by SITE Intelligence Group, a company that tracks extremist groups.

Sri Lankan Prime Minister Ranil Wickremesinghe acknowledged the claim when taking questions from reporters during a press conference in the capital, Colombo.

“All that we knew earlier is that there were foreign links and that this could not have been done just locally,” Wickremesinghe said. “There has been training done and a coordination which we [have] not seen earlier.”

At least 310 people were killed and another 500 were injured Sunday when near-simultaneous explosions took place at eight locations across the island nation, which is located off the southern tip of India.

Three explosions erupted at churches holding Easter services while three others happened at hotels, including some commonly used by Western tourists. Most of the explosions were detonated by suicide bombers, according to the Sri Lankan defense ministry.

The first funerals for victims were held Tuesday.

At least four Americans were among those killed, according to a U.S. official briefed on the investigation. One of the Americans was identified Monday as Dieter Kowalski, 40, of Denver, according to his mother and Pearson, the London-based global education company that employed him.

At least 45 children were also among the dead, including at least five who were not Sri Lankan, according to Christophe Boulierac, a spokesman for the United Nations Children’s Fund.

Ruwan Wijewardene, the state minister of defense, told the Sri Lankan parliament Tuesday that authorities have information showing Sunday’s blasts were carried out “in retaliation” for last month’s attacks at two mosques in New Zealand that killed 50 people.

At least 40 suspects have been arrested around the country in connection to the Easter explosions, Sri Lankan police spokesman Ruwan Gunasekara told ABC News. Twenty-six of them were being questioned by the criminal investigations department Tuesday, while three were being held by the terrorist investigations unit.