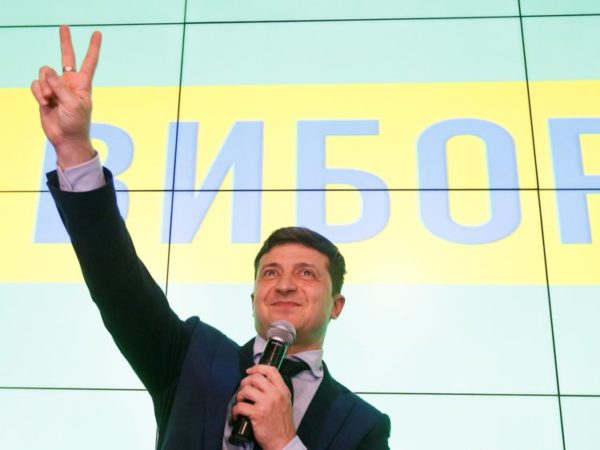 The former entertainer and political novice took 73 percent of the vote, with Poroshenko a distant second, the polls indicated.

Zelenskiy, 41, won the first round of the election on March 31, getting nearly twice as many votes as Poroshenko. Opinion polls had shown him extending that lead before Sunday’s decisive vote.

He declared victory Sunday to emotional supporters at his campaign headquarters.

“I’m not yet officially the president, but as a citizen of Ukraine, I can say to all countries in the post-Soviet Union look at us. Anything is possible!”

An emotional Poroshenko conceded defeat to his supporters, some of whom were crying.

Poroshenko said on social media he thought Zelenskiy’s win would spark celebrations in the Kremlin.

“They believe that with a new inexperienced Ukrainian President, Ukraine could be quickly returned to Russia’s orbit of influence,” he wrote.

Despite immense popularity, Zelenskiy’s often populist rhetoric has been questioned by political pundits.

Throughout his campaign, he’s embraced his image of a political novice unmarred by political “filth,” and vowed to change the system.

His campaign and outlined policies were largely vague and short on detail.

Nevertheless, his message of change resonated with voters across the war-torn country with a flailing economy.

“It’s very important that this voting is based on reason,” said Poroshenko, while casting his vote accompanied by his grandson earlier Sunday. “It might be fun and hilarious at first, but I don’t want it to get painful later,” he said, in a likely reference to Zelenskiy’s previous job.

The two clashed in a much-publicized debate at the nation’s largest sports arena Friday, hurling insults and attacking each other’s vision for Ukraine’s future.

Asked by the moderators to pose a ‘yes or no’ question to each other, Zelenskiy didn’t hesitate, looking Poroshenko in the eye and saying: “Are you not ashamed?”

Poroshenko’s response, muted by loud cheering from the comedian’s supporters, was — no. “I am proud of Ukraine and the last five years,” the former president said.

But many Ukrainians don’t share that view. Despite his uncompromising efforts to keep the country on a pro-European path, Poroshenko has been accused of reluctance to tackle rampant corruption, a failure to reinvigorate the economy and an inability to end the war with pro-Russian separatists in the east — a five-year-long conflict that he promised to resolve in just two weeks before he swept into power in 2014.

“I am the result of your mistakes and promises,” Zelenskiy told Poroshenko during Friday night’s debate. “I am not your opponent,” he said, pointing a finger at the president. “I am your sentence.”

“Zelenskiy’s presidency ushers in a period of major political realignment in Ukraine,” Dmitri Trenin, the director of the Carnegie Moscow Center think tank, told NBC News. He added that Zelenskiy will need to show from day one that he is “a radical break” from the past.

“I would expect Zelenskiy going after corrupt officials as a very popular move,” he said.

There have been questions raised around what fate may befall Poroshenko after he loses the election — especially after Zelenskiy said that the former president might have to “meet with a prosecutor” during Friday’s debate.

While Poroshenko is likely to be targeted by anti-corruption investigations, Trenin doesn’t think he will actually go to jail.

“I believe Ukraine’s Western allies will protect the man who has become a symbol of opposition to Russia,” he said.

As the new commander-in-chief, Zelenskiy will have to deal with the increasingly belligerent actions of Russian President Vladimir Putin.

Poroshenko declared martial law in parts of the country in November after Russia fired at, rammed and then captured three Ukrainian ships.

Trenin says Russians will watch closely for any signs that Zelenskiy might be willing to start implementing the 2015 Minsk accord that enabled a shaky ceasefire in the east and begin restoring some links with Russia.

Zelenskiy has consistently said he is ready for direct talks with Putin, but will “never sacrifice our territories and people” — a point he reiterated in a recent interview.

“Zelenskiy’s victory may be interpreted in Moscow [in] that the high point of anti-Russian politics in Ukraine has passed,” Trenin said, adding that Kiev’s general orientation toward the West is certain to continue under Zelenskiy.

But Zelenskiy’s hold on power will not be absolute. At least, not right away.

Kiev-based political analyst Valentyn Gladkykh told NBC News that Zelenskiy will now have to deal with a parliament, in which he does not have his own party and in which Poroshenko’s faction dominates.

Gladkykh says he will be hard-pressed to make friends with the lawmakers as he prepares for parliamentary elections in October, all while trying not to lose the support of his voters.

“Poroshenko, if he doesn’t do anything stupid after losing the election, will hand over power and start preparing for parliamentary elections, trying to destroy Zelenskiy’s approval rating, with the help of his faction in parliament and people in government,” Gladkykh said.

However, Zelenskiy’s fledgling party, formed shortly after he announced his presidential bid, could also contend for a majority this fall to solidify his hold on power.

“The president needs a functioning ruling coalition in the parliament to make policy,” said Balazs Jarabik, a non-resident scholar at the Carnegie Endowment for International Peace.

“The battle for Ukraine will continue on April 22.”